Plans are afoot in the old burl town 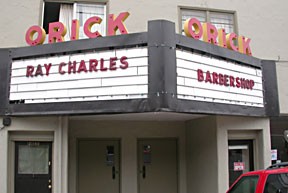 Been to Orick, lately? No, not through Orick, but to. Pulled over, parked the car, got out, stretched the legs and grazed on the sights? Certainly we're not posing this question to Orick's few hundred residents, nor to the handful of plucky merchants who daily tootle out of the hills to unlock storefronts, kick aside yesterday's dust and then, as the hours tock away, sit humming to themselves in the pin-drop silences between yammering roars of semis jake-braking on the 101.

Likely, you haven't. Why stop, you say: It's just another paint-curled burl town, gone from a heyday of about 2,000 people to less than 300 now, and from 300 elementary school kids to less than 60. Unless you're jonesin' for a redwood bear or windmill, there's nothing to see here except maybe the nightly parade of tweakers and boozers. "You should come back tonight after 10 o'clock, when the little drunks and speed freaks roam the streets," said one Main Street burlmeister last Friday in the late afternoon, as he readied his shop for a pined-for onslaught of three-day-weekenders. (They wouldn't come, he fretted; Orick's not an "anchor city" for long-distance travelers.) He refused to give his name, though, in such a context. "Ask me about my bears, talk to me about my art, and I'll let you use my name. But if you want to talk about politics and how bad things are ..."

Bah. He's sick of the media bloodthirstily trailing his town's controversy-ridden downhill skid -- a descent whose beginnings most people date back to 1968 when the government gobbled up the timber environs to form Redwood National and State Parks, and which they say accelerated after 2001 when the park banned camping, commercial wood gathering and driving on nearby Freshwater Spit. "We can't salvage material off the beach anymore, we can't get permits to take dead and down wood out of the preserves ... tourism's awful now," the woodcarver said. "We lose an average of one to two shops a year." There used to be 14 burl shops in town; now, there are six.

The Park, meanwhile, complains of persistent poaching of timber from its lands.

But this isn't that kind of media report, exactly. Because, if you had been to Orick lately and snooped about, you'd have noticed some curious sparks of hope here and there, nevermind what the grumpy shopkeeps say. For instance, there's that newish Mexican restaurant, La Hacienda, which rivals any counterpart elsewhere in the county. There's the Orick Market, under new ownership as of about four weeks ago. In one half of the old movie theater, by the Palm Cafe and Motel, there's Kenny Hirsch's new and utterly cool Kenny's Barber Styling -- a row of barber chairs in front of nice big mirrors, old red cafe booths propped about on the hardwood floors, classic rock `n' roll posters on the walls, a tank of goldfish next to a cosmic bonsai, a movie starring knights in armor on the television (sound turned off) and something classical lilting out of huge speakers. A friend of Hirsch's bought the theater building a while back, and ever since has had a revolving tongue-in-cheek marquee; last week it said "Ray Charles."

Perhaps the biggest ray of hope is a couple of miles north of town, at mile marker 124. There, a string of former, glommed-together "skid" houses -- those little shacks loggers used to roll up and down on rails between work sites -- have been remodeled into tidy, front-lawn-trim three-bedroom vacation rentals. And they're just the beginning of the grand scheme held by Trinidad resident John Russavage and a dozen or so other shareholders in the Redwood Parks Lodge Co. to capitalize on the National Park's enveloping presence.

Anyone who's been around here for some time will know about Russavage and his partners. Their plans, begun six years ago, stalled for a time after the Del Norte County District Attorney's office pursued an allegation that the lodge promoters had lured an elderly, allegedly mentally infirm couple from Crescent City into investing loads of cash in the venture. The case was dismissed, and Russavage cleared of the charges.

Now, the group's back in action, hailing the press with news of its sponsorship of National Trails Day, this June 2, at its (barely) sprouting Redwood Adventures Vacation Village and recreation and events center -- on a big, raw, grassy, elk-filled former sawmill deck set amid tree-furry hills with creeks on all sides and laced with trails leading into the park. For the event they'll have bike rentals, guides, live music, horseback rides -- all hints of bigger things possibly to come.

Last Friday morning, the blue-eyed, 6'4" Russavage, his dark hair going iron gray, loped about the big empty grounds next to the rental houses. He smelled like leather, on account of his tall hide boots and mountain man jacket ("the Teddy Roosevelt line"), and as he walked his words tumbled out about the future here: three to four big hotels, a campground, a bronze elk, a big banner, a restaurant and coffee bar, guides, gear, a concert venue, a campground, and -- the biggie -- an official National Parks Lodge along the lines of those grand-old-days affairs found in Yosemite and Yellowstone. "I mean, what a way to leave your mark on the earth, to build a National Parks Lodge -- instead of a topless bar" or something like that, he said.

Russavage took off into the woods onto a paved park trail. "All the trails in the park come here," he said. "You want to see old growth trees? There you are, right in front of you, baby." Clean air, tall trees -- it's his mantra. He even has a band called Johnny Redwood and the Rockin' Rangers. "All I ever talk about is redwoods ... sing about redwoods ... dream about redwoods." He doesn't blame the Park's presence for timber's dramatic decline -- it would have crashed anyhow, once the last old growth reserves got cut, he said.

Russavage's scheme includes another hotel -- possibly a Holiday Inn -- back in town on a 28-acre hay ranch. He thinks his projects will be good for the park, and good for Orick. "I've never heard of a National Park Lodge failing, anywhere," he said. "Orick won't go away, because of the park."

Although Russavage seems to have the fond support of many townfolks and merchants, some of them are pretty cautious with their enthusiasm. And they flat out disagree with him about the park's good influence.

At the Snack Shack, run by Jackie Pierce, Jackie and her husband, Cliff, were passing the time Friday afternoon during another long lull in burger traffic. Their burgers are good -- fresh, shaped by hand -- and the milk shakes are made with real ice cream. The drivers in all those cars whizzing by were missing out. But business has grown steadily worse.

"It's not real good," said Jackie. "Not since they shut our beach down [to camping]. Fifty percent of my customers came off that beach. The whole town was depending on that." Jackie recalled the story -- legend all over town -- of how several years ago a park ranger unwittingly warned a local not to go into Orick because it was dangerous and full of "lowlifes, scum and drug whores." Somebody made a T-shirt about it.

Next door, at Hagood's Hardware, Judy Hagood was sitting at her computer in the dark, cluttered recesses. The store's stuffed with antiques -- not for sale; she doesn't have another place to store them. She offers movie rentals, and nuts and bolts. She said she went up in a helicopter one day, and from up there, Orick looked beautiful. "But if you drive through it, Orick sucks. It's dying. ... The park doesn't want the town to survive. That's the feeling I have." As for Russavage's big lodge plans, she said, "I'll believe it when I see it." She paused, then added, "He's living a pipe dream."

But we'll end on a happy note: At the Shoreline Market, Betty Meyer was working checkout. "You have to work very hard to make a living in Orick," she said. She's seen the town go from four filling stations to one (here at the market). And, yes, she, too, blames the park's presence and the loss of 300 campers. But she loves it here, nevertheless. "I wouldn't live anyplace else."