Orion and the Pleiades 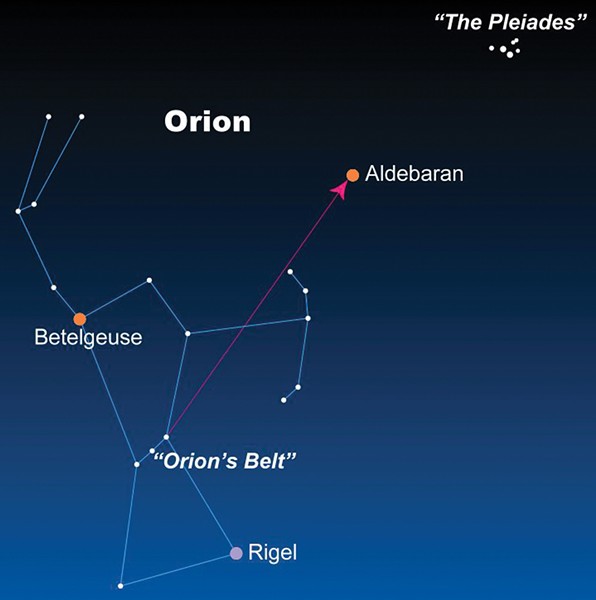 Image courtesy of EarthSky.org If you can find Orion, you can find the red giant star Aldebaran, thence the Pleiades. In January of 2023, the prominent orange light above Orion's "arm" is Mars.

Winter nights here on Humboldt's coast often bring startlingly clear skies, complete with those bright winter constellations our ancestors knew, loved, feared and mythologized. Even from the streetlights of Old Town Eureka, with its confusing medley of ionized mercury and sodium vapors and plain vanilla white LEDs, you can still see Orion the Hunter chasing the Pleiad sisters across the heavens. He's been at this for a few millennia and I sometimes doubt he'll ever catch them.

I've written about Orion before ("Orion: Hunter of the Winter Skies," Jan. 1, 2015), but not his awkward relationship to the Pleiades, aka the Seven Sisters, whose photons we see from around the time Christopher Columbus sailed across the Atlantic Ocean. In case you're not familiar with them, they're the fuzzy patch (to aged eyes) or cluster of six individual stars (youthful eyes) that you'll find by extending a line, twice as far as Orion is tall, through the three stars of Orion's belt up and to the right.

And if longing seizes you for sailing the stormy seas,

And all the gusty winds are raging,

Then do not keep your ship on the wine-dark sea

But, as I bid you, remember to work the land.

That's the grumpy old farmer Hesiod ("Hesiod: Farmer, Poet, Misogynist," Sept. 9, 2022), who, like many a sodbuster, isn't known for his love of the sea. So yeah, the sisters are fleeing Orion into the misty deep of the western horizon. It's a twist on the usual boy-meets-girl story. Zeus had condemned their dad, the Titan Atlas, to support the world on his shoulders, leaving Mom — Pleione — to care for their seven daughters. One day they met Orion, who was out hunting and hit on both the girls and their mother. This went on for years. Finally, Zeus got tired of the whole soap opera and transformed the women into doves (pleiades in Greek), putting them near their five half-sisters the Hyades and out of Orion's reach in the sky.

The interesting thing is, without a telescope, only six Pleiades stars are now visible because one of them, Merope, isn't as bright as it was back when the Greeks were mythologizing. (Next time you pass a Subaru — Japanese for Pleiades — notice the six stars in its logo.) One story from the ancient Greeks has it that the missing seventh sister, Merope, was ashamed of having a mortal husband, Sisyphus, and hid herself away.

And not just the Greeks. Anthropologists have found similar stories, complete with the "missing" seventh star, across the world, in European, African, East Asian, Indonesian, Native American and Aboriginal Australian cultures. According to Ray Norris (Advancing Cultural Astronomy), "Many cultures regard the cluster as having seven stars, but acknowledge only six are normally visible, and then have a story to explain why the seventh is invisible ... [Australian] Aboriginal stories say the boys, or man, in Orion are chasing the seven sisters — and one of the sisters has died, or is hiding, or is too young, or has been abducted, so again only six are visible."

In the summer sky, Orion sets as Scorpius is rising or, as the Greeks had it, he's being chased by a scorpion, perhaps a throwback to the 5,000-year-old Akkadian story of scorpion men found in the Epic of Gilgamesh. In any case, that's Orion's punishment, meted out by Artemis, goddess of chastity (among other things), for his relentless pursuit of the sisters. As we'd say nowadays, he just didn't get it: No means no.

Barry Evans (he/him, barryevans9@yahoo.com) likes the Navajo version of Orion, Atse Ats'oosi, the First Slender One, protector (with bow and arrow) of his people.