A tour of river hotspots 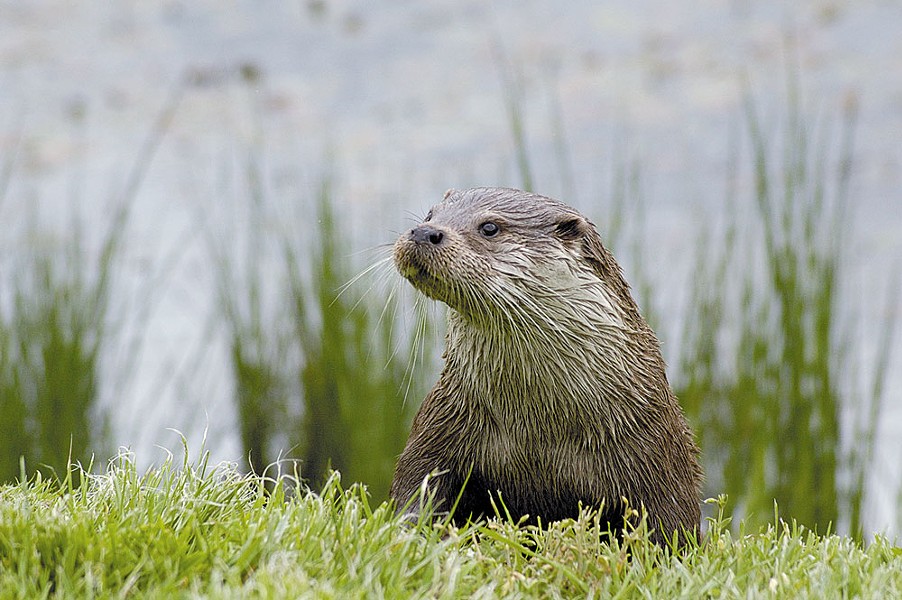 While hiking the King Range, I saw a flash of brown just up Cooksie Creek. Then a splash. The small, slicked head of a Lontra canadensis created a gentle wake as it spiraled upstream away from me. The river otter kept a wary eye but never stopped its aquabatics until I entered the creek to cross. Then it vanished.

Over three decades on the North Coast, I've seen river otters romping up the Trinity like groups of teenagers, circulating through the Arcata Marsh ponds and, for many years, entertaining visitors to Trinidad Harbor. Seeing the river otter feels special — in my home state of Kansas, the once common otter was last seen in 1904.

On a tour of some of Humboldt Bay's river otter hotspots, Jeff Black, professor of wildlife at Humboldt State University, gives me an introduction to the animal's behavior and biology. Black and his colleague Micaela Szykman Gunther and grad student Kristin Brzeski studied the population of river otters around Humboldt Bay. They found there were many more otters than anyone expected. Between 41 and 44 otters have been identified between Little River estuary and the Humboldt Bay Wildlife Refuge. Black notes that this is among the highest current recorded populations in North America.

We start in King Salmon, where Black points out otter scat on the dock in front of Gill's By the Bay. I would have passed by the small clumps of minuscule broken crab shells, bones and feather remnants. Otters have a taste for fish, crabs, birds, water insects and the odd, unsuspecting amphibian or reptile.

This kind of public toilet — referred to as a "latrine" — plays an important role in otter communities. The latrines work like bulletin boards, communicating gender, age and whether a female is nearing or in heat through the unique signature of each otter's scat. In the matriarchal otter world, family groups are comprised of a mother, her daughters and sons that are typically less than a year and a half old. These families have relatively stable territories. Older sons leave to join other males who roam as packs, visiting and mating with only the matriarchs of the various families, which makes sense from a genetics perspective.

As the high tide recedes, we park at the south end of the Hikshari' trail along the Elk River estuary. We cross the old railroad bridge and pick our way along what turns out to be a popular otter thoroughfare. This area is home to another otter family and their latrine. I am content to take Jeff's word, although the sniff test is made available. That territories can be so small indicates the abundance of food. We aren't much more than a mile from King Salmon. It is a sign, observes Black, of the "health of our environment, as [otters] sit at the top of this water-based food chain."

Although otters will raise their pups in dens burrowed into riverbanks, most of the time they use different "resting sites." We spotted a number of these resting sites along Elk River tucked under protective shrubs and small trees. Given the abundant, well-used paths and worn slides off the banks and into the water, I'm surprised not to see any otters. Jeff nods knowingly, "Oh, they are around and probably watching us."

Otters are crepuscular, preferring the twilight hours of early morning and evening. But, Black adds, "they will be nocturnal where there is a lot of disturbance during the day."

I stop at the Arcata Marsh before going home and walk the trails with new eyes, spotting evidence of otter traffic between Klopp Lake and Hauser Marsh, and between Klopp Lake and No Name Pond. There are far too many walkers and dogs to see an otter today. Soon the most surefire way to see an otter will be at the Sequoia Park Zoo, where the new Watershed Heroes exhibit is slated to open in June. The multi-million dollar exhibit will include a waterfall coming down into a pool where visitors can watch otters swimming underwater. Zoo Manager Gretchen Ziegler tells me it will be populated by three male otters born at the Oakland Zoo.

Although I look forward to getting to know them, nothing equals the unexpected sighting in the wild. Perhaps on a return to Cooskie Creek or traipsing around Little River, I'll again catch that flash of brown from the corner of my eye. Or maybe I'll be lucky enough to see a pup slide into Freshwater Creek some crisp spring morning.

Be an otter spotter

If you see a river otter in the wild anywhere in Humboldt or Del Norte counties, submit your sighting to the Humboldt State University team maintaining otter records and tracking the local population. There are no sea otters on the North Coast, so river otters may well be seen in the ocean, in estuaries and along area rivers, lakes and streams.