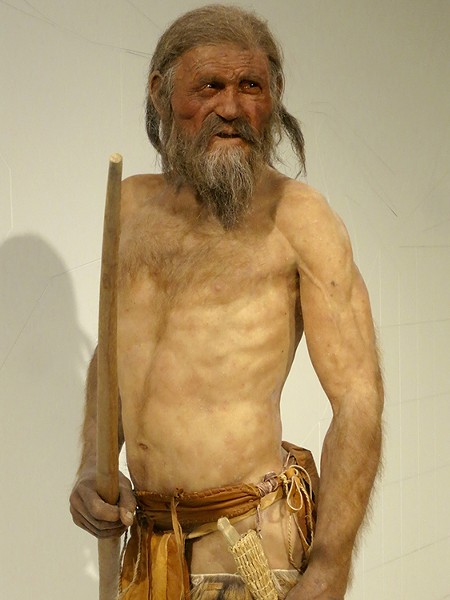 Photo by Barry Evans Reconstruction of Ötzi by paleo-artists Adrie and Alfons Kennis.

Peering through a small, double-glazed viewing window at the brown, desiccated body of a man who died 5,300 years ago is an uncanny experience. Should he even be on display, for the likes of me and several hundred thousand visitors a year, in this museum in Bolzano, Italy? I tell myself that, since being discovered high in the Italian Alps 26 years ago, he's been examined more than any other human being, so a few non-invasive gazes won't make much difference. But still ...

Ötzi (ert-zi), the name given to him by an Austrian journalist (he was found in Italy's Ötztal Alps) was discovered half-in, half-out of melting ice at 10,500 feet, close to the border with Austria (very close, resulting in years of ownership dispute between the two countries). As mummies go, Ötzi is unique, a wonderfully preserved "wet mummy," unlike, say, dry Egyptian mummies, whose organs were removed as part of the process. Soon after his death, snow, then glacial ice, entombed Ötzi. Happily for us, the cold kept his body from decomposing.

In life, he was a Caucasian male, about 110 pounds, 5 feet, 2 inches, age at death 45 years. (His weight and height were average for his time.) He's now shrunk a little and weighs just 35 lbs. He was also a murder victim — a fact not appreciated until an X-ray taken 10 years after his discovery revealed a flint arrowhead lodged beneath his right shoulder. Ötzi probably bled to death soon after being shot from behind. Since the contents of his stomach showed that he'd stopped to enjoy a hearty meal just a few hours before the ambush, he probably didn't realize he was in danger. And from a two-day-old deep cut on his hand, it seems he'd been in a recent fight, leading to a host of speculations about the circumstances of his murder.

As interesting as the body is to researchers, his kit also tells us much about him. His copper-headed axe, for instance, was left next to him, presumably ruling out theft as a motive. Copper was the first metal to be used at the end of the Stone Age, and the 99.7 percent purity of Ötzi's four-inch long ax-head (lashed to a yew handle) attests to the skill of metal-workers of the time, since after ore-bearing rock had been smelted, the copper was cast, cold-forged, polished and sharpened in an elaborate process.

He also had an unfinished 6-foot yew longbow, together with 12 arrows in an elaborate leather quiver, a short dagger on his waist and a fire-lighting kit, complete with flint and pyrite (to create sparks) and tinder fungus.

The photograph shows a reconstruction of Ötzi in life, created by twin-brother Dutch paleo-artists who based their model on computer tomography and CAT scans. Although he looks pretty hardy, he suffered from an arthritic knee, bad teeth, lyme disease, whipworm (an intestinal parasite) and possibly a head injury. Still, his strong leg muscles tell us he walked a lot — maybe he was a goat herder or a shepherd. Or was his ax a prestige item that only a tribal headman would have owned? His kit included some medicinal herbs — was he a shaman?

It's weird to realize that when the Great Pyramid of Giza was built, Ötzi had already been entombed in ice for 700 years. And he'll be around for many years to come, since he's kept frozen under ideal conditions to prevent decomposition. He probably won't mind a visit if you find yourself in the South Tyrol. He may even appreciate all the attention.

Barry Evans (barryevans9@yahoo.com) would be flattered if people paid to see his naked body 5,000 years in the future. Or anytime, really.