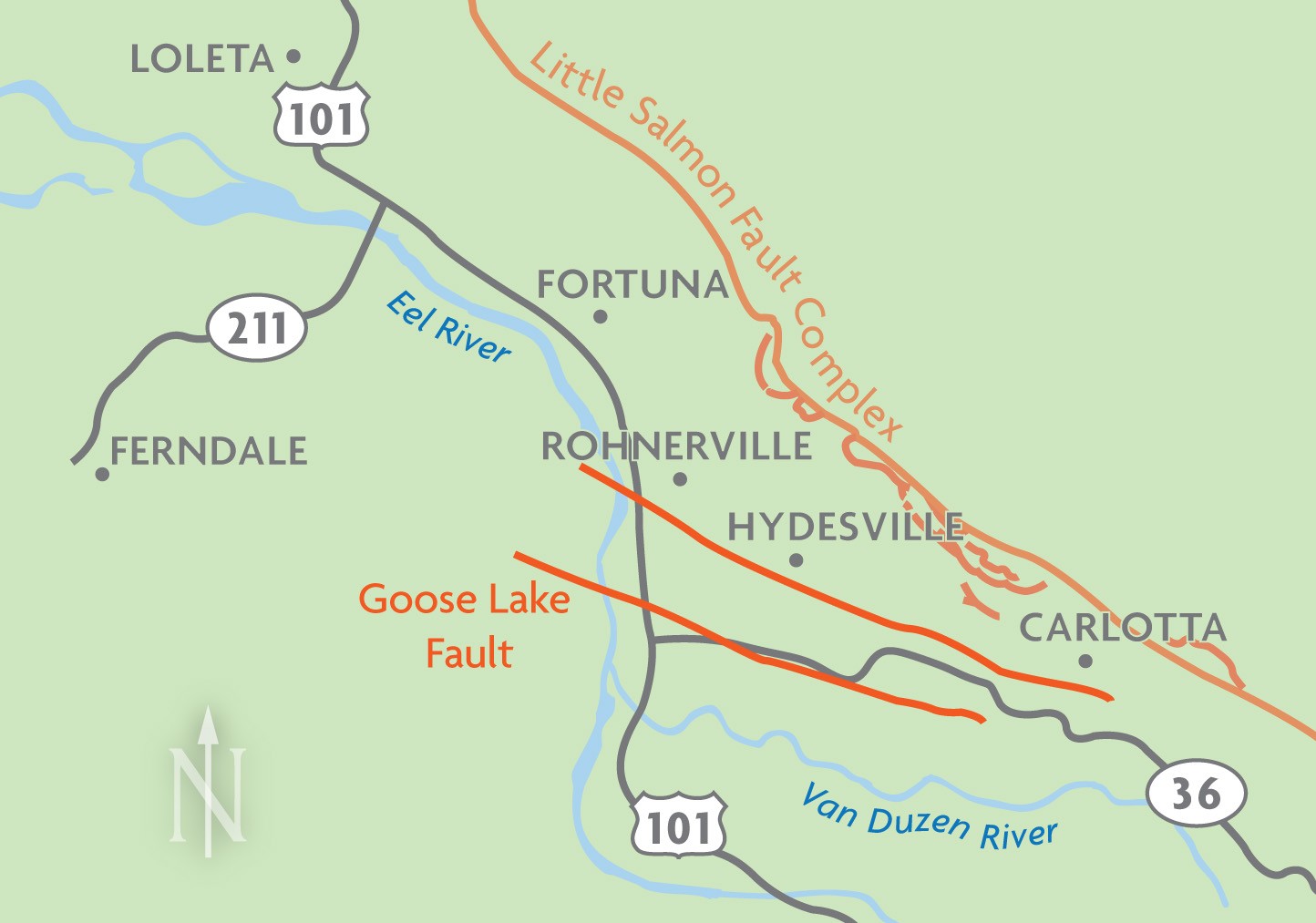 Coiling alongside curvy Highway 36 down the valley cut by the Van Duzen River is a 12-inch pipeline that goes by the unimaginative name of 177A. Year round, pound after pound of natural gas takes a trip through 177A before dispersing through a jungle of pipes, eventually trickling into tens of thousands of stoves, water heaters, furnaces and ovens. Much of 177A's contents spill into the belly of the Humboldt Bay Power Plant, which transforms them into enough power to light up 100,000 homes.

As it happens, Line 177A is also one of Pacific Gas and Electric's five gas lines at highest risk of rupture in California.

Work papers filed by PG&E with its California regulator reveal that the 52-year-old pipeline is gravely at risk somewhere in the Fortuna/Hydesville/Carlotta area, where it crosses a fault zone called the Goose Lake Fault. Engineers have deemed this segment of pipeline seismically unsafe, and say it must be replaced or it will remain at risk of a devastating break.

But in spite of the dire tone of the engineers who authored the document and a rate hike that was supposed to pay for the fix, the utility company has already postponed fixing the pipe at least once -- and now doesn't plan to replace the pipe for four more years.

There was no map of the hazardous segment in the PG&E documentation, and the Journal was unable to pinpoint its precise whereabouts.

Details about the hazardous pipe come in the wake of the deadly gas pipe explosion in San Bruno two weeks ago. The explosion and the furious fire it lit mutilated much of a neighborhood in the San Francisco suburb, razing 38 homes, damaging dozens more and killing four people. Three other people are still officially missing, but their families are not hopeful: days after the fire was finally doused, cadaver-sniffing dogs located what may have been their powdery remains amid the ashes.

The tragedy has shone a bright light on what had previously been the largely unknown world of the state's underground gas infrastructure and its regulation -- or lack thereof. Earlier this week, PG&E was forced to turn over a list of its 100 highest priorities.

Ringing in at number 37, the list states, is a completely different section of Humboldt County gas line -- a 28-foot length of pipe near Fernbridge Drive and Depot Road near Ferndale, a section that the utility states is the subject of an engineering review because of a "potential for ground movement." After the engineering review, the description on the list states, "PG&E will determine whether any repair or replacement action is warranted."

But a much starker picture is painted of pipeline 177A in documents that PG&E's engineers filed in 2007 and 2009 with their regulating agency, the California Public Utilities Commission. The documents were filed in support of two separate rate increases -- one that took effect in 2008, and a second that is still awaiting approval by the CPUC, but is expected to take effect the start of next year.

The 2007 work paper states that the rate hike will need $1.3 million to replace one mile of the pipeline, a project that was "identified and prioritized by PG&E's risk management program." The replacement is needed, the document states, because the pipeline "travels through several areas prone to landslides and several known earthquake fault zones." The document stated the company planned to do the repair work in 2010. And on Sept. 20, 2007, the CPUC approved a 6.1 rate increase over the next three years, in order to pay for that and a few hundred other pipeline improvement projects around the state.

But in 2009, when it was time for PG&E to ask for another rate increase, they again filed a work paper saying this work still had to be done, and asking for more money to do it.

"This location is in the top five of probability of rupture," the document reads. "If no mitigation is to occur, the probability of losing large customers and line rupture would remain high. This line is a main feed into the Eureka area and the Humboldt Bay Power Plant."

"What it calls for is greater oversight, better analysis and more clear information from PG&E," he said. "I think the sad part is I have no confidence in what PG&E is telling us. And that's the key -- we need to. Right now we're getting inconsistent and inconclusive information from them."

PG&E spokesman Paul Moreno said Tuesday that the "top 100" list has been misunderstood; it is not, he said, a list of the 100 most dangerous pipelines in the state. "It's not actually a high-risk list," he said. "It's a list of long-term protective maintenance and a risk-management planning tool."

The problem certainly hasn't been on the radar of the sheriff's emergency management office until now, said program coordinator Dan Larkin. He said he'd never been notified by PG&E that there was reason to believe that pipeline 177A could rupture. Until now, the county, like most in the state, has had no specific plan designed for a response to a natural gas fire, though he said the county is well prepared to respond to any emergency.

Humboldt County Supervisor Clif Clendenen, who represents the district that Line 177A's problematic segment runs through, is extremely familiar with that line: In fact, he remembers the pipe being installed on the edge of his family's Fortuna orchard in 1958, when he was a boy of 5. He said he's "never had any reason to doubt its safety" and was reassured when PG&E employees came out to inspect the line.

No infrastructure can be 100 percent risk-free all the time, but he said he was concerned that PG&E has already postponed the project and now doesn't plan to fix it for years to come.

"2014 is out there -- it's four years out there," he said. "I know life is not completely safe, but I want to make sure we're in the best position we can be for the safety of our residents."

Katie Worth is a freelance reporter based in San Francisco.