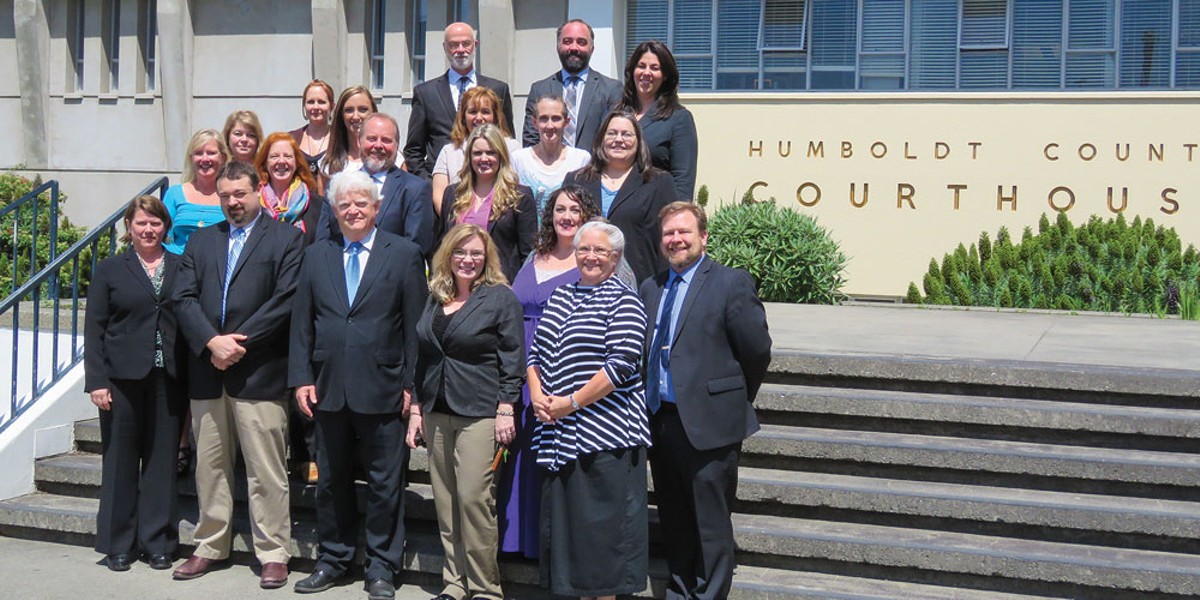 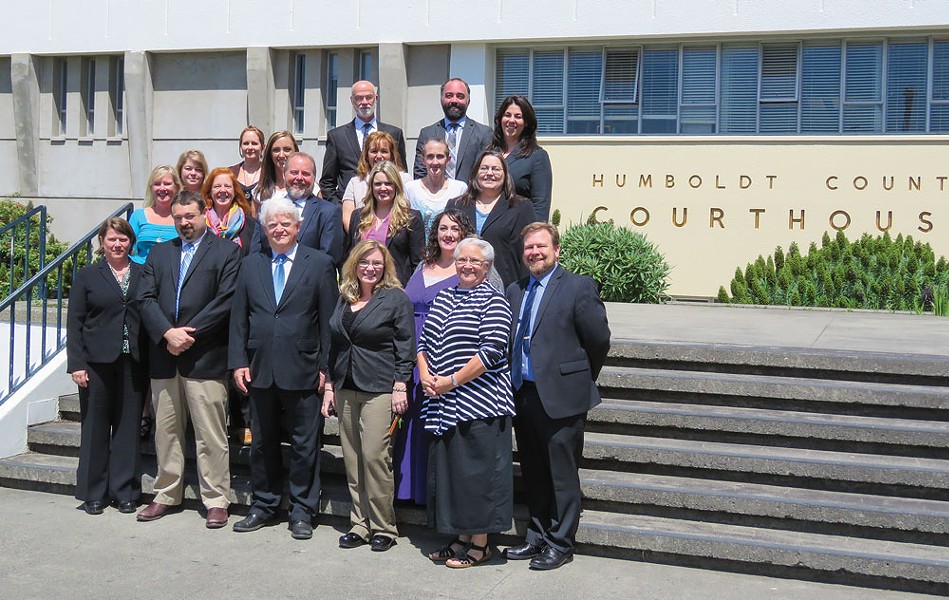 Submitted Recently retired Public Defender Kevin Robinson (center) with most of the office's staff, who will now have to welcome a new boss under less-than-favorable circumstances.

Let's get one thing out of the way: I hope David Marcus succeeds. I want him to take the helm of what is already a strong office and make it better, ensuring that Humboldt County's indigent get the constitutional protections they — and every member of our society — deserve. I hope he finds new efficiencies and new ways to serve his clients. And I hope the talented group of attorneys assembled by Marcus' predecessor, Kevin Robinson, flourish under his watch.

All that said, the Board of Supervisors has done Marcus — and potentially the people of Humboldt County — a tremendous disservice.

The responsibility of public defenders in this country is nothing short of awesome. They stand between their clients and the incredible power of the state, making sure the rights afforded them by the U.S. Constitution aren't disregarded or trampled simply because they are too poor to hire a private attorney.

Additionally, in Humboldt County, the public defender's office handles an incredible caseload. In 2014 — the last year for which we have complete numbers — the office's attorneys were appointed in 89 percent of felony case filings and 77 percent of misdemeanor cases. It's not a stretch to say that a poorly run public defender's office could have catastrophic ramifications for an already overburdened local court system.

Given that context, we were a bit perplexed when information started rolling in about the board of supervisors' process to replace the highly respected Robinson, who retired in December after a decade on the job. First, we heard that the county didn't see fit to put a single defense attorney, law professor or retired judge on the panel that would be interviewing candidates and providing input for supervisors. Instead, the county stacked the panel with folks who generally sit in opposition to the public defender's office: the district attorney, the undersheriff and the county's chief probation officer, to name a few. County Human Resources Director Dan Fulks' contention that it would have been impractical to expect a working defense attorney to clear his or her schedule for a day to sit in on the panels simply doesn't hold water, especially seeing as at least a half dozen have indicated they would have happily volunteered their services.

(If you're struggling to understand why the makeup of the panel is a problem, just imagine Eureka using an advisory panel consisting of a public defender, someone from the American Civil Liberties Union, Verbena from Redwood Curtain CopWatch and a social worker to hire its next police chief. Laughable, right?)

And we must say that the county's ultimate selection of Marcus does little to alleviate any concerns generated by the process. Marcus may well be a fine man and a talented attorney — again, I hope he is — but Google his name and the first things that come up are allegations that he was too close to the prosecution during his tenure heading the Lassen County Public Defender's Office and that he allegedly only spent 30 to 40 percent of his days at work. Couple that with the facts that Lassen County's office is only about a quarter of the size of Humboldt's and that Marcus hasn't practiced criminal law in five years, and we see plenty of red flags.

But the bottom line is that even if we assume our supervisors had great reasons for hiring Marcus, they have already failed him.

After deciding to tap Marcus for the post in closed session, the county waited more than 24 hours to send out a press release announcing the hire. And when the press release came out, it was three paragraphs long, without a quote from him or any of the sitting supervisors.

One would hope that the supervisors knew the specifics of Marcus' background when they hired him. If that's the case, they should have known enquiring minds would Google Marcus' name and find all the apparent red flags the Journal turned up. As such, it would have been wise to address some of that in the press release, even if just through a quote from a sitting supervisor talking about the vetting process and explaining why the board felt Marcus was the best person for the job.

An elected official's job is first and foremost to carry out the people's business, but it's also about effectively communicating with the public about what's being done and why. I believe the public deserves an explanation as to why the board hired Marcus for this critical post, but Marcus also deserves to step into the job with the explicit support of the people who hired him. Instead, the board has ensured that the loudest voices weighing in on Marcus' hire are those opposed to it.

It should be noted that Second District Supervisor Estelle Fennell has made public comments in support of Marcus — first responding to critics of the process in during a Feb. 14 supervisors meeting and later in an email to the Journal. But the fact that her four fellow board members declined to respond to an email asking them to explain why they felt Marcus was the best fit for the job and to respond to those critical of the hiring process is unfortunate, and Marcus should be as mad about it as anyone.

The whole thing leaves people with the unfortunate feeling that the supervisors just don't care very much about the public defender's office; that they didn't care enough to ensure the process was fair or that it resulted in the best hire. Hell, it seems they didn't even care much when their newest hire was getting batted around like a piñata in the court of public opinion.

Of course, Marcus hasn't done himself any favors by not returning Journal phone calls, which leads us to wonder how someone who seemingly can't pick up a phone to defend himself against an enquiring press corps can be expected to defend people, often at the most desperate moments of their lives, against the full powers of the state.

Again, I really hope Marcus succeeds because so many live are counting on him. But I must say, nothing about this process — or the way it was handled by almost everyone involved — gives me much confidence.