Out, out brief candle 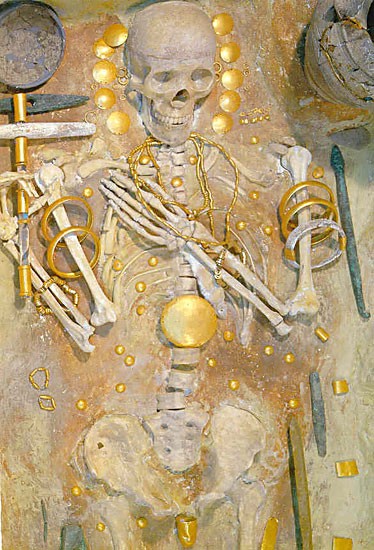 Anthropologists have yet to find a society that didn't hold a belief in an afterlife: most of us humans think that something awaits us after death. Often the choice is binary: you'll either end up in purgatory ("Where can I get a cold beer?") or paradise ("Enough with the harps, already!"). If not heaven or hell, perhaps you'll choose -- or be designated -- to return to this realm as a sea slug or an eagle, or (my fantasy) as a fabulous ballet dancer. Maybe you'll come back as a troubled angel, tasked with recording the day-by-day pains and pleasures of this earthly existence. Or you'll be marooned forever between worlds. Or ...

We've been speculating about the Great Beyond for at least 100,000 years, when our ancestors started burying their dearly departed on the assumption they'd be up and about at some point. Beads, rings, spears, swords, clothes, food and drink have been found in ancient graves from India to Peru. Even Neanderthals, once written off as our tough-but-oafish cousins, often buried their dead with a few thoughtful resources for their next adventure.

How could near-universal belief in life after death have arisen, absent convincing evidence to the contrary? Maybe the key was hygiene. It could have worked like this: two tribes living side by side are identical in every way except that some imaginative person in one tribe has this new idea that life doesn't end at death. She or he convinces the rest of the tribe that, rather than toss their dead out of the cave to be scavenged by wild animals, they should bury them -- just in case they need an intact body for what comes next.

In time, basic hygiene considerations come into play, since rotting flesh is a prime source of disease. The bury-our-dead tribe is spared this particular threat, and starts to thrive in comparison with their less healthy toss-our-dead neighbors. Over the millennia, the life-after-death believers flourish, and the belief eventually gets added to all the other assumptions encoded in human genes. Today, experiments show that most two-year-olds appear to have been born with a belief in life after death.

Me, I crave simplicity, and what could be a simpler afterlife than 'nothing'?