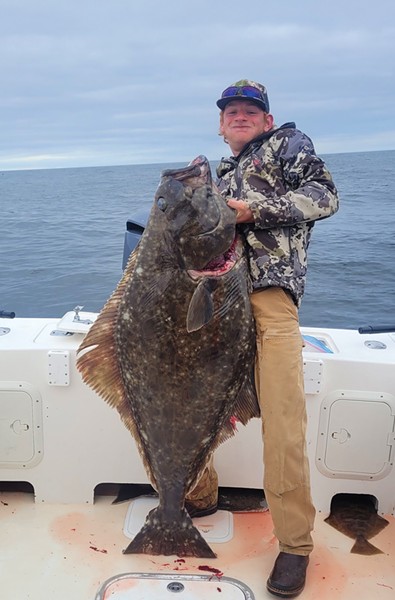 Ocean conditions over the long weekend were just about perfect, and there were no shortage of holiday boaters taking advantage of the flat-calm seas while targeting Pacific halibut and rockfish. There were plenty of rockfish limits from Shelter Cove to Crescent City, but the halibut again garnered most of the attention, especially out of Eureka. Though tides weren't favorable and the black cod were a nuisance, lots of halibut were still hitting the decks as they have been since the salmon season closed at the end of May. With a long stretch of fishable water in the week ahead, the quota count is sure to pile up. As of June 28, we are just about half way towards the cap of 38,740 net pounds. If you have yet to get in on the halibut action, and there's probably very few of you left, this is your week to make it happen.

After a week of calm seas, the wind is forecast to pick up slightly Saturday. As of Tuesday afternoon, Friday's forecast is calling for north winds up to 5 knots and waves from the west 2 feet at 10 seconds. Saturday's forecast is calling for north winds 5 to 15 knots and waves north 3 feet at five seconds and west 2 feet at nine seconds. Winds will be similar Sunday, blowing 5 to 15 knots from the north with waves north 6 feet at seven seconds. These conditions can and will change by the weekend. For an up-to-date weather forecast, visit www.weather.gov/eureka/ or www.windy.com. To monitor the latest Humboldt bar conditions, visit www.wrh.noaa.gov/eka/swan. You can also call the National Weather Service at 443-7062 or the office on Woodley Island at 443-6484.

According to Tim Klassen of Reel Steel Sport Fishing, the Pacific halibut bite is still going strong. He said, "There was a couple days where the fishing slowed, but I think that was more on account of the tide change in the afternoon. The fish are still here, and I think they have moved in a little. Some have been caught around 220 feet. There are some nice ones around too, we're seeing quite a few in the 25 to 30-pound range and some bigger ones as well. The rockfish bite at Cape Mendocino is still really good, and there's some nice lings around too."

The rockfish bite north of the head remains off the charts for black rockfish according to Curt Wilson of Wind Rose Charters. "I've been spending some time near Patrick's Point, but there's fish all over," said Wilson. "The halibut bite is still red-hot; most boats are getting limits straight out of the harbor. The crabbing has really picked back up with the calm seas. We're putting plenty of jumbos on the deck each trip."

"There was a decent salmon bite by the Hat last Monday, but that's been it," said Jake Mitchell of Sea Hawk Sport Fishing. "The rest of the week boats were lucky to get one or two. Rock fishing has been great with easy limits at all the usual spots, including the Hat, Ranch House and Rogers Break. There's been a few halibut caught when the boats can get north to Gorda." Recreational ocean salmon fishing from the 40°10' line, which includes Fort Bragg and Shelter Cove to Point Arena, is closed until July 22. The season will resume July 22-Sept. 5. For more information, please visit the ocean salmon webpage at www.wildlife.ca.gov/Fishing/Ocean/Regulations/Salmon.

"Ocean conditions were great over the holiday weekend, and the bottom fish bite was excellent," said Britt Carson of Crescent City's Englund Marine. "Everyone who went out scored limits. The California halibut bite completely shut off, likely due to the ocean getting a little cooler. Razor clamming continues to be excellent at South Beach, with anglers scoring limits of big clams. The next round of minus tides begins July 10. A few Pacific halibut were caught at the South Reef."

"Salmon fishing busted wide open over the weekend, with limits of hatchery coho, a few kings and big numbers of shakers and wild coho," said Andy Martin of Brookings Fishing Charters. "The salmon are in 180 to 270 feet of water, with diver, Fish Flash and anchovy combinations working best. Fishing is decent for Pacific halibut in 200 feet of water. Lingcod action has been good, with limits close to the harbor, and larger fish at the lighthouse. A 44-pounder was caught over the weekend on the Nauti-Lady. Albacore are being caught 40 miles off of Coos Bay, and a few Brookings boats are planning exploratory trips this week."

The spring-run salmon opener was slow over the weekend, with just a couple fish landed each day. The water temps have dropped due to the cooler weather and rain, so fish are likely moving upriver quickly. Once the water temperatures rise, a mixture of spring and fall salmon should begin to hold in the estuary. Spring-run regulations are in effect through Aug. 14, with a daily bag and possession limit of one salmon of any size.

Salmon fishing is slow overall on the Rogue Bay according to Martin. "A few kings are being caught. Cooler weather and light rain allowed river temperatures near Agness to dip to 63 degrees, allowing any salmon holding up in the estuary to blast upriver."