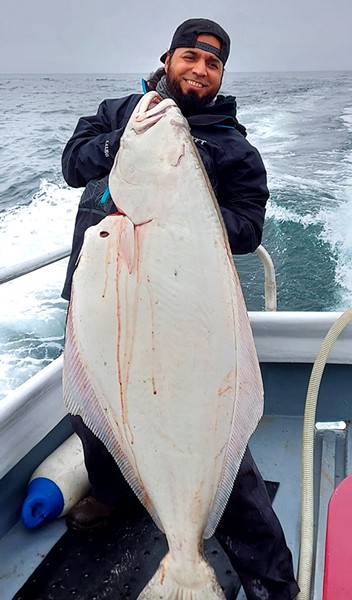 Photo courtesy of Curt Wilson/Wind Rose Charters Red Bluff resident Juan Nava landed a giant Pacific halibut while fishing out of Trinidad Monday aboard the Wind Rose. The big fish taped out at 58-inches and was estimated to weigh in the 90-pound range.

The halibut bite over the weekend picked up right where it left off, with anglers pulling em' over the rails at breakneck speeds. Boats were back on the water Saturday following last week's windy conditions. And the Pacific halibut were ready and willing to take any bait sent their way. It's been a while since we've seen fishing this good, and there's a good chance it may come to an early end. With an entire month left before salmon season opens, which will command much of the attention, there's a good chance the 38,740 net pound quota will be gobbled sometime in July. So, if you haven't yet to get in on the action, you better make it quick. This fishery won't last long. Through June 28, CDFW projected 18,143 pounds had been caught. But those numbers will be sure to skyrocket after the wide-open bite the last few days. To view the latest catch projection information, visit www.wildlife.ca.gov/Conservation/Marine/Pacific-Halibut#31670772-in-season-tracking

On Saturday July 2, people may fish California's waters without a sport fishing license. All regulations, such as bag and size limits, gear restrictions, report card requirements, fishing hours and stream closures remain in effect. On Free Fishing Days, every angler must have the appropriate report card if they are fishing for steelhead, sturgeon, spiny lobster, or salmon in the Smith and Klamath-Trinity river systems. For more information visit, www.wildlife.ca.gov/Licensing/Fishing/Free-Fishing-Days.

Halibut is still the focus out of Eureka, and the fishing is really good even though it slowed down on Tuesday reports Tim Klassen of Reel Steel Sport Fishing. "Not everyone is getting limits every day, it's about being in the right place at the right time," said Klassen. "If those line up, you'll do well. The bite has moved slightly north, with most of the fish coming between the 48 and 54 lines. The fish are a little bigger now, with most falling in the 20-to-50-pound range. The good news is the black cod seemed to have vanished, which allows you to get the bait to the bottom. It looks like we're in for windy conditions Wednesday through Friday."

According to Curt Wilson of Wind Rose Charters, the Pacific halibut bite out of Trinidad is about as good as it gets. "I think roughly 30 boats launched Sunday and I heard just about all the boats caught halibut," said Wilson. "Most of the action is happening straight out and 265 feet seems to be the magic number. The rockfish bite remains wide-open, with the area between Cone and Turtle Rock being one of the better spots at the moment. The lingcod bite has been excellent, as well, with limits coming quickly most days. The crab bite seems to be dependent on the weather, but the customers are still going home with a few each trip."

"Salmon fishing remains very slow at the Cove with only a few being caught each day," said Jake Mitchell of Sea Hawk Sport Fishing. "The rockfish bite is consistently good and we're getting easy limits. The ling cod have been a little tougher to come by. The Hat, Ranch House and Rogers Break are all producing solid action."

"The ocean has been nice the last few days and the rockfish bite has been excellent," said Britt Carson of Crescent City's Englund Marine. "California halibut have finally shown up with a few being caught daily off of South Beach by kayaks trolling anchovies and guys fishing off the rocks. The minus tides are producing excellent clamming conditions for the just reopened razor clam fishery. There's lot of limits being reported, and good tides will stick around through the fourth. A few Pacific halibut are being caught at the South Reef along with plenty of Petrale Sole."

"After a fairly slow start to the ocean salmon season a week ago out of Brookings, catch rates soared on Sunday and Monday as charter boats zeroed in on schools of kings and coho around 4 miles offshore," said Andy Martin of Brookings Fishing Charters. "Charters averaged a keeper and a half per rod on Monday, with lots of wild coho and shaker kings released. Private boaters also are getting in on the action. The coho are near the surface, while the kings are 80 to 120 feet down in 250 feet of water. Anchovies are out-fishing artificial lures. Fishing for salmon close to shore remained slow. Lingcod and rockfish action has been good, while halibut fishing is slow to fair."

According to Martin, a few salmon a day are being caught on the Rogue Bay, but the ocean is currently the best bet for kings. "Hot weather inland, however, will warm water temperatures on the Rogue and force early fall kings to hold up in the bay. The water temperature at Agness was 68.5 degrees on Monday, up from 59 degrees a week ago. When it reaches 70, the action on the bay typically heats up."