In their eighth collaboration, Burton and Depp have lost their magic 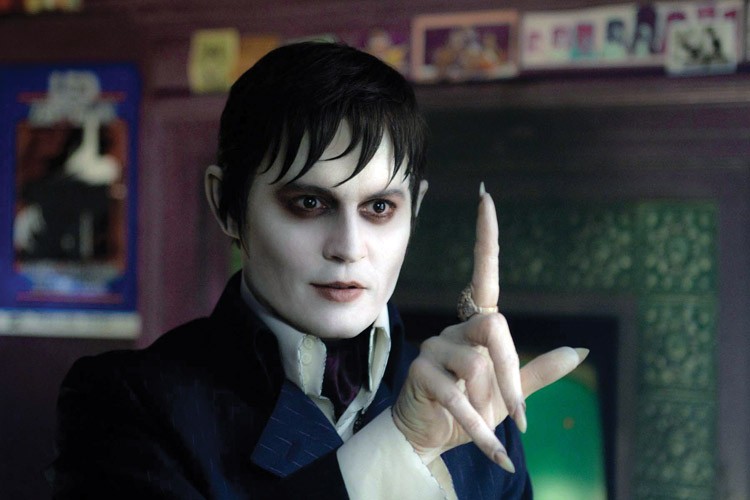 DARK SHADOWS. I walked into this movie with my guard down and my hopes up. Bad move. Whether it was due to my recent good fortune at the theater or my nostalgia for Tim Burton's early movies -- which I love dearly -- I ignored the fact that his more recent work has consistently let us all down. Dark Shadows is no exception.

Drawn from a late '60s daytime soap about which I know nothing, Shadows tells the story of Barnabas Collins (Johnny Depp in pancake makeup, phoning it in). He's the scion of an extremely wealthy 18th century Maine fishing family. As a youth, he makes the mistake of spurning the advances of a witch (Eva Green), who turns him into a vampire, then locks him in a buried coffin for around 200 years. In 1972 he is accidentally unearthed, kills some workmen and hippies, then tries to rebuild the fortune of his now threadbare empire. But the aforementioned witch is still around to complicate matters, so things don't go especially well.

As with any Burton production, the costuming and design are dramatic and imaginative. The atmosphere of an early '70s Maine fishing village is gloriously detailed, and the soundtrack includes some classic jams. But Burton has lost the visual magic and big-hearted storytelling that were once his trademarks. He assembles an excellent cast, as usual, but doesn't give them much to work with. Great actors like Jackie Earle Haley, Helena Bonham Carter and Chloe Grace Moretz are forced to do what they can with thin, uninspired characters.

The trouble lies with the script, which takes potentially delicious guilty pleasures -- vampires and witches and crumbling empires -- and manages to make them really boring. The first two-thirds of the movie drag on seemingly interminably; then the ending is a rushed cacophony of ridiculous twists haphazardly thrown together.

Dark Shadows might have been great fun, if somebody with less money and more inspiration (like, say, Tim Burton 20 years ago) had scaled it down and focused on telling the story. Instead it is lifeless, a little mean-spirited, and unnecessary.

Fortunately, I was able to salvage the weekend with The Cabin in the Woods, which you should make every effort to see (if you haven't already) -- assuming you like movies that are smart, scary, hilarious, gory and entertaining throughout. If not, well, see Dark Shadows. PG13. 113m.

THE DICTATOR. The latest from subversive comedy genius Sacha Baron Cohen. This time out, the creator of Borat and Ali G stars as a Middle Eastern dictator. R. 105m.

BATTLESHIP. Yes, it has really come to this: a would-be blockbuster "inspired by" that old Milton Bradley guessing game with the little plastic ships. Director Peter Berg invites big, loud aliens into the naval warfare. (Let's hope they don't guess "B7.") PG13. 131m.

WHAT TO EXPECT WHEN YOU'RE EXPECTING. Five interconnected couples have a bunch of babies, violate parental taboos to comedic effect and ultimately discover universal truths. Or something. With Cameron Diaz, Jennifer Lopez, Chris Rock and some real-life infants. PG13. 110m.

If you're not feeling the frothy summer escapism vibe, check out Future Shorts, a showcase of short films with large ambitions. The traveling festival aims to create "another way of experiencing film" and to "change the way we look at the world." That's asking a lot, which is pretty damned refreshing these days. The six shorts include such eclectic fare as a claymation erotic comedy, a documentary on 1970s wife-swapping and a tragicomic Spike Jonze film animated with hand-cut pieces of felt. The festival plays Friday at 8 p.m. at the Arcata Theatre Lounge and is your Journal pick o' the week.

Quentin Tarantino's gut-punch debut, Reservoir Dogs (1992), plays the following night at 8 at the ATL. Sunday's family feature is The Indian in the Cupboard (1995). And next Wednesday, Pint and Pizza Night abandons its usual Sci-Fi theme to feature a pair of "radical, dystopian documentaries." B.I.K.E. (2005) depicts the Brooklyn chapter of the Black Label Bike Club, a fringe network of tall-bike jousters who espouse environmental and anti-consumerist rhetoric. END: CIV sounds the alarm bells of economic chaos, peak oil, climate change and political turmoil. A raffle will benefit Food Not Bombs. 6-10 p.m.

THE FIVE-YEAR ENGAGEMENT. An engaging romantic comedy from co-writer and star Jason Segel about the thick and thin that can follow a marriage proposal. R. 124m.

THINK LIKE A MAN. Adapted from a self-help book, this amiable-if-trite rom-com at least offers a charming cast. PG13. 122m.