Joan Dunning’s paean to the murrelet 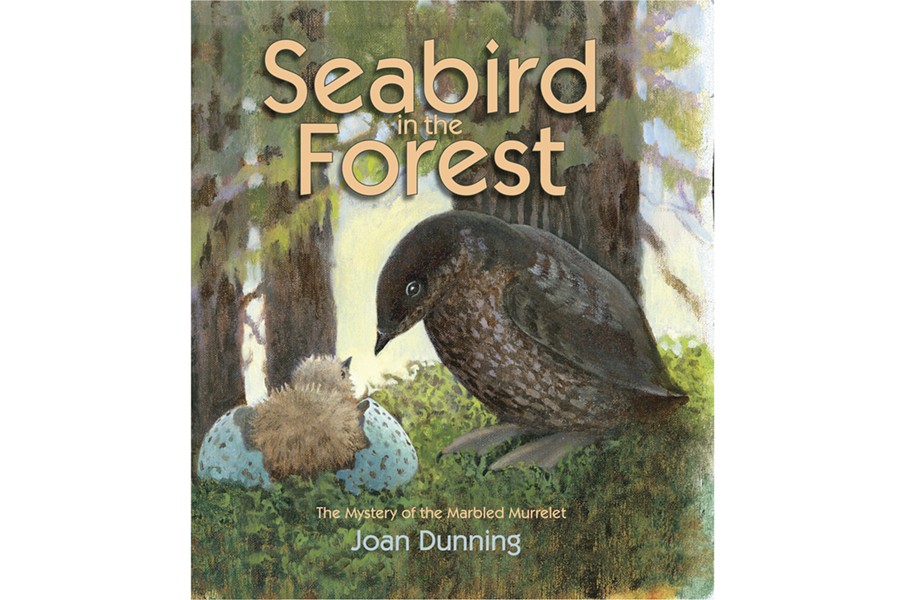 In her new book Seabird in the Forest: The Mystery of the Marbled Murrelet, Humboldt author and painter Joan Dunning's appealing text and intimate paintings explain how this peculiar member of the murre family nests in the ancient woods. Unlike their closest relatives, who raise chicks in offshore rocky habitats, murrelets cradle their young on giant limbs in the canopy. While incubating, parents alternate flying to the ocean to fish at dusk and dawn. After the egg is hatched the pattern is repeated, with adult birds sometimes traveling as far as 50 miles inland to bring fish to the nest from the sea.

At a recent book-signing reception, Dunning described the long, quiet month after hatching: "The little chick lives on the limb ... sheer instinct keeps him from walking off the edge and keeps him still, so a jay doesn't get him. And he just sits there -- puffs his wings every now and then, turns around a little bit, and waits a month to grow up. Meanwhile, his parents are coming morning and night, and bringing him fish. At the end of a month, he starts plucking out his down with his own beak. He plucks all day long, until all of the sudden he turns into a little black and white seabird. The down allows the murrelet to be camouflaged in the forest until the day it's ready to jump off the limb -- never having flown before, its parents aren't around, nothing -- just instinct says it's time to go. Once it jumps out of that tree, it follows a creek all the way around to the ocean."

This is the mystery of the murrelet: that it nests so far from its sea habitat, that it has replaced ground with canopy nesting, and that it is born decorated in downy feathers that suit it for stillness in the woods but wears underneath the proper plumage of a seabird. It wasn't until the 1970s that biologists saw evidence of what the indigenous nations already knew. Dunning says that even Audubon mispainted the murrelets as nesting along the shore -- perhaps because that was the most logical hypothesis?

Seabird in the Forest takes us into the quiet of the nestling's month in the woods and the magic of the canopy layers. Readers will find an evocative picture of a space very few of us ever get to see and yet under which we walk daily. The alternate world of the upper branches -- ferns, canopy waterfalls, "earthworms that never touch the ground during their entire lives ... even trees sprout in the soil ..." Dunning so beautifully imagines this "landscape above a landscape" that you may not look up the same way again.

Those familiar with Dunning's Secrets of the Nest may be surprised at the change in her painting style. It took nearly a decade between Dunning's first submission for Seabird and its execution, during which she made a transition from watercolor to oils. A child once asked her how she gets so much detail. Dunning responded, "Oils are fun like that, you can get really great detail. They're kind of almost like being God, in that you can do things that are so natural. My other books I illustrated in watercolors, and watercolors are wonderful ... but oils are so much fun because you get to spend time fluffing the feathers, and if you don't like the way you fluffed them yesterday you get to fluff them again. I had been painting in oils for about eight years, and then I went back to trying to work in watercolors, and it felt like making doll clothes. I liked the forgivingness of oils. I wanted to spend time there; I wanted to relax with this chick, to relax in the canopy ... Oils imitate nature when you are working with them. It's uncanny sometimes how real they are."

Dunning suggests walking in the forest right after a big storm to see "a delight of canopy vegetation." For her book she also watched nest videos, perused photos and spoke with local experts on canopy habitat and ornithology. This helped her visualize a colorful, moving picture of a baby murrelet's view of the forest weeks before it launches into a life of waves and water.

Seabird in the Forest is available at local bookstores including Northtown Books and Eureka Books. See more of Dunning's work at joandunning.com.