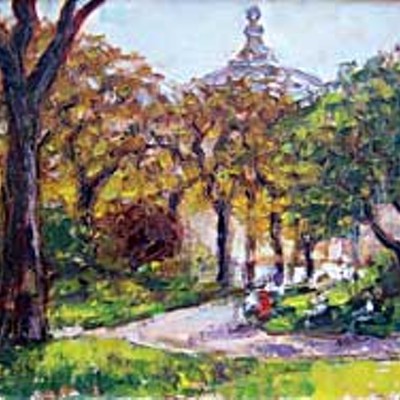 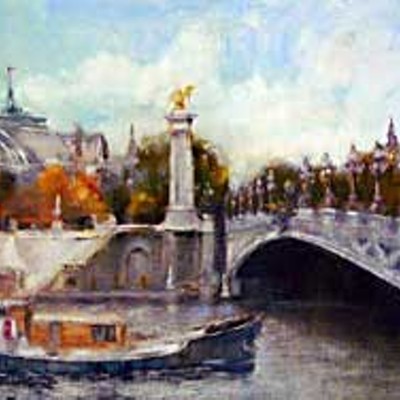 It was raining the day we first met Axel Marchand. Micki and I had taken shelter under a long canopy with a tin roof, in an area just off the Champs Elysees, after getting rained out of the place we'd originally planned to paint that day. We started new paintings under the shelter, with the rain pounding on the tin over our heads and bright orange leaves floating to the ground around us. It was the middle of September, about halfway through our month-long Parisian painting trip, and it was finally beginning to feel like fall.

There were very few tourists in the vicinity, a welcome change from the Alexander III Bridge, where we'd been working when the rain started. We'd also painted on the bridge the day before and had decided to return, even though the location had an irritating vibe. The views were extravagant from all directions, but we'd situated our easels in an odd little enclosed space where tourists felt free to put their noses an inch from our canvases or stand right in front of our easels, blocking our view. The traffic was incessant and every French official who had a siren blared it to get across the intersection.

At any rate, under our quiet and cozy shelter off the Champs Elysees, Micki and I were painting the same subject - a woman sitting at the other end of the canopy sketching the Grand Palais - when Axel stopped to look at our work. He was young and charming and appeared absolutely delighted to meet us. "How very wonderful!" he said, in French-accented English. "You don't see painters on the streets of Paris anymore."

Axel said he taught "traditional methods" at a private art school around the corner. It was the first day of class, orientation, so he expected it to be a short one, and he hoped we'd still be there when he finished work so we could continue our conversation. After complimenting our paintings, he hurried off.

Micki and I returned to a topic we'd discussed throughout our trip, the scarcity of painters on the streets. We had expected to blend right into the scenery of Paris, figuring there'd be so many other painters working that no one would even notice us. Instead, our easels were tourist magnets - people took our pictures as frequently as if we were the Eiffel Tower or Arc de Triomphe. It was fun and annoying in equal measure, depending on how well the painting was going on any given day.

Our paintings of the sketching woman under the canopy became more complicated when she packed up her campstool and left. A changing environment was a daily challenge. People moved, boats sailed away, the light shifted and clouds obliterated the sun. It meant we had to work faster, be more confident with our brushwork, more interpretive. We were trying to figure out how to finish our paintings without the model, when Axel returned.

"Your work - it's somewhat traditional, oui?" he said to Micki. "And your friend is more expressionist. Like Munch, yes?" I decided there were worse artists to be compared to and piled the paint on the canvas with a palette knife in an expressive way to impress our young art teacher.

Axel was also a painter and seemed hungry to talk with other artists. He said he too enjoyed working outdoors, but he rarely had the opportunity anymore with his teaching schedule. We asked why there didn't seem to be any other painters on the streets.

"There are a few behind the Musee D'Orsay, selling watercolors to tourists," Axel said. "And others paint in Montmarte." He used that dismissive French shoulder gesture, a shrug that said, "not impressed."

Axel, who was born in Paris, said he had seen a steady decline in the number of plein air painters over the years. Painting was no longer emphasized at the Beaux-Arts, the centuries-old Paris school. The focus was on "performance art."

After we'd packed away our equipment and said farewell to Axel, we went to a bistro and discussed the encounter over glasses of red wine, inexplicably served cold. Micki could envision a time when painting was no longer taught because artists were no longer interested in learning the skill. I argued that painting was our earliest language, an ancient form of communication impossible to erase from the collective psyche.

"The fact that something always has been, doesn't mean it always will be," said Micki. Technology has exploded in a way the world has never seen before, she mused, and we can no longer predict that painting will always be relevant. It was a bit disconcerting that this conversation took place in a sidewalk café behind the Musée d'Orsay, a veritable shrine to late 19th- and early 20th-century painters.

We saw Axel Marchand once again a few days later, at the same place. It wasn't raining this time, but we had returned to the shelter for the view of the Grand Palais, beyond a winding path lined with benches. It was a glorious day with blindingly brilliant autumn light and our paintings were turning out well. Enormous horse chestnuts dropped from the trees above our canopy, the sound magnified like gunshots off the tin roof.

We had finished our paintings and were gathering our supplies when Axel returned. He admired the practicality of the French shopping carts we were using to haul our painting gear from our apartment in the Madeleine district to our painting sites, the wonderful "Rollsers" we'd purchased on Rue Cler the first week we were in Paris. Micki had started out the trip carrying her supplies in a backpack and I'd been using a rolling suitcase, both of which turned out to be impossible. By the end of our first day, her backpack felt like it was loaded with rocks. The tiny wheels on my luggage kept overturning, stuck in between cobblestones or tangled in the thick carpet of autumn leaves. The Rollsers had waterproof vinyl sacks, giant rubber wheels and, even fully loaded, were as easy to pull as a feather.

"Painting this way, outside, it's like camping, oui?" observed Axel, watching us break down our easels. "The packing and unpacking, the transporting of equipment." Oui, we concurred. It was indeed like camping.

Axel walked us to the corner, recommending museums and exhibits to take in before we left the city. We exchanged e-mail addresses and double-kissed each other's cheeks in the French way. As we watched our new friend hurry down the Champs Elysees to catch his Metro train, I fought back my sadness. It was the last day we'd be painting in Paris. Our husbands would join us the following day and we would become tourists, visiting museums and seeing the sights, things we'd put off doing until their arrival so we could devote our time to painting.

We created a number of plein air paintings in our month abroad and came home with notes, sketches and photographs for others. We'd traveled to Paris hoping to tap into the history and energy of the place by having the experience of working there ourselves, longing to discover what it was about that particular city that had inspired artists to produce such original and inventive work over the centuries. It's hard to say if our plein air adventure produced work of significant value, but it felt satisfying to take part in keeping the tradition alive.

In March and April, Micki Dyson-Flatmo and Linda Mitchell will exhibit their Paris work in a show called "The Paris Effect" at the Cody-Pettit Gallery, 527 G Street in Eureka. An opening reception during Arts Alive on March 3 runs from 6-9 p.m.