Teach someone to fish (and clean) 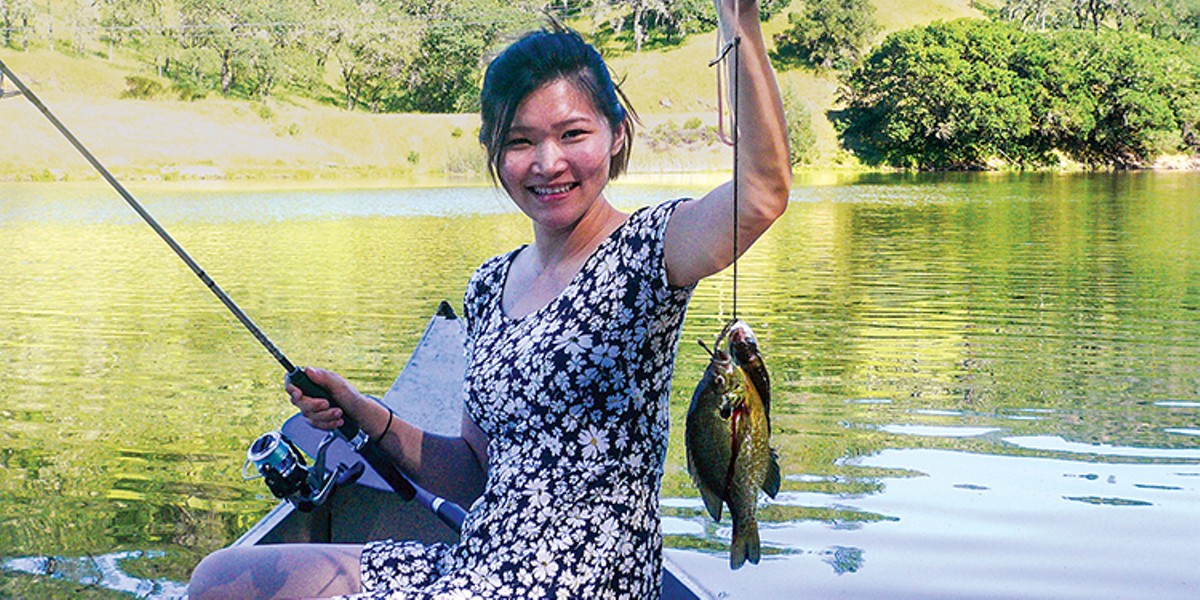 Photo by Kevin Smith Diane Tu with a pair of panfish.

There is nothing like sharing a love of fishing with someone who has never cast a line. Whether fishing with a child who can barely stand on the lake shore or an adult who was simply never offered the chance to hook a fish, the pursuit of panfish is the perfect way to get new anglers into the sport. Panfish refers to a suite of perch-like freshwater fish in the sunfish family that are best scaled and cooked whole in the pan, rather than filleted, due to their size. Panfish were some of the very first fish my older brother Justin and I landed on the lake shores while picnicking with our grandparents when we were 3 and 5. Panfish — such as the orange-spotted sunfish, red-ear sunfish, crappie and bluegill — are easily caught, non-native and incredibly abundant in California lakes and slow moving streams. Late summer and early fall are prime times to get out fishing for these species and come back with some good grub.

They are small (often between 5-12 inches long) but what they lack in size, they make up for in abundance and an insatiable hunger that provides hours of light tackle fishing fun. Once you find waters where panfish swim, new anglers are almost guaranteed success landing these fish over and over again.

Local lakes with good panfish populations include Fish Lake in the Six Rivers National Forest, Ruth Lake (off of State Route 36) and Shasta Lake (off State Route 151), however, these fish are so abundant that this list is merely a hint of the locations where panfish are biting.

The rig for this style of fishing is simple and inexpensive. Run 4- to 6-pound test line off a spinning reel with a bobber approximately 1.5 feet up from the hook. Use a small hook, such as a size 8-12, and a single size-7 split shot weight about 6 inches up the line. A third of a live red worm or night crawler is the most effective bait but, honestly, one could easily hammer bluegill on powerbait or even a ball of dough. No need for a powerful rod and reel; your kids can land fish after fish even on a cheap 3-foot-long Disney pole found at most sporting goods shops. You can purchase the whole setup for less than $30. Remember that all anglers over the age of 16 need a license. Though currently there is no size limit or bag limit (like 25 bluegill per person per day, for example), always review specific fishing regulations before heading out on an angling adventure, as requirements can change. Freshwater fishing regulations can be found on the California Department of Fish and Wildlife website, http://www.eregulations.com/california/fishing/freshwater/, or at any sporting goods store as a free hardcopy.

Once you catch them, you will need to scale and clean your fish. This could not be easier. To scale the fish, start at the head and work your way to the tail, holding your knife blade perpendicular to the fish's body. Simply scrape against the "grain" to remove all scales. Once scaled, lightly scrape from head to tail with the "grain" and watch the fish's original vibrant colors return. This is not necessary but makes for better presentation when serving the cooked fish. To clean the fish, simply make an incision along the belly from the vent (just in front of the rear fin on the underside) to just below the gills. Remove the innards and rinse the gut cavity. Now get to cooking.

As unappetizing as fish that thrive in slow moving, shallow, muddy waters might sound, panfish are actually quite tasty. Typically cooked whole in a skillet with the skin on, the meat of these fish is firm and flaky white, with no earthy or "muddy" flavor at all. Frankly, I am surprised more people do not pursue this abundant fishery, given how easy they are to catch, clean and cook. And exposing new anglers to sport and subsistence fishing with panfish offers an opportunity to learn the whole process. Want a panfish recipe that will knock your socks off? Check out the Taiwanese Panfish recipe on the next page.