Doug Ingold's There Came a Contagion 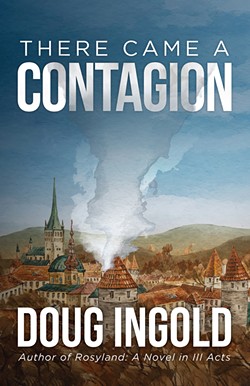 Humboldt author Doug Ingold's new novel There Came a Contagion lays out a dystopic vision of a countryside gripped by drought and famine, where frightened people seek scapegoats. Religious and civic leaders rise to prominence by mastering the articulation and gradual augmenting of that fear, assigning blame to outsiders in ways that dovetail with extant biases. These leaders say "the contagion" has come from outside and that punishing or purging figures at the group's margins will put things back to rights, encouraging townspeople to overcome inhibitions that previously constrained the open expression of hate. Rhetoric functions as an accelerant, fanning long-standing bias and resentment into murderous intent.

A Contagion is a work of historical fiction set among peasants in a 16th century German village and, yes, it's about a witch hunt, but the hunt proper does not commence until the book's second half. The novel's early chapters methodically set the stage for this grotesque event, building a world from the sights, sounds and cognitive horizons of a medieval village, and situating young protagonist Elsebett in a multigenerational narrative therein.

Ingold's medieval tale is propelled in part by a desire to illustrate the range of human response to societal crisis, and no one who's been paying attention to U.S. headlines since the COVID-19 pandemic hit will be surprised by its inglorious nature. Readers who are moved to superimpose the story in mind's eye over the map of recent U.S. history, like a template will likely raise their eyebrows at the passages of overlap and exhale at the parts where the stories diverge.

Present day parallels aside, Ingold's chronicle follows two generations of a German-speaking farming family in a tiny Western European village. Bereaved father Basil Helgen indentures his 7-year-old daughter Elsebett to village midwife/healer Rachel Mueller after the child's mother dies in childbirth. His family's life is difficult, like any pre modern subsistence farmer's: hard outdoor labor, close family and community ties, narrow economic margins, intermittent hunger and vulnerability to external forces like unpredictable weather and extortionate feudal masters. These aspects of community life figure in the book's earlier chapters, told largely from Basil's point of view. By the book's midsection, when Elsebett begins her apprenticeship, the narrative shifts to adopt her perspective with lyrically imagined passages detailing Frau Mueller teaching her to forage for medicinal plants and compound medications, how to assist in childbirth and, controversially, how to read.

The author's previous novel Rosyland plotted points of contact between old San Francisco money, the theater world of Ashland, Oregon, and the cannabis culture of Southern Humboldt. In this plot, place is a constant, while characters' connections unfold in time. Ingold is competent at describing an intensely local existence where, especially for women, opportunities for exposure to the outside world are rare.

Ingold practiced law in Garberville for many years before retiring to write full time, which may have served him well when it comes to writing about rural village life. His plainspoken narrative is attentive to familial triangulations and conflicts across generations. It forays readily into the interior, noting how a dynamic between two people might be experienced as "a private physical sensation," and how a person ensconced in a close-knit family can feel creeping isolation "growing around him like a thick skin."

In the novel's second half, a sense of impending disaster takes hold. Theories blaming drought and famine on a particular marginalized group gain feverish adherents, as initially halting efforts to identify a scapegoat become a juggernaut. Elsebett and her mistress Rachel possess knowledge about the natural world — much less the intimate functions of the supposedly sinful female body — that has not been incorporated within the discipline of medicine. In the eyes of their friends and neighbors, these features become enough to certify the women as a threat.

There Came a Contagion deftly crafts a portrait of a world before science, where calendar time is reckoned in terms of saints' days and the church is sole arbiter of truth. "Contagions want to happen," Frau Mueller says to Elsebett at one point. "What a contagion calls for is a cause, someone or something to blame .... The contagion produces a sleight of hand to draw attention away from itself." Witch hunts, she says, are entertaining by design: They appeal because they are associated with "excitement, drama and suspense." Before they do anything else, it seems, they answer the craving for a cool story.

The book's final third surveys the motives that make it easy for the good folks of the village to accommodate evil. Fear and a sense of grievance motivate some characters' fascination, while for others it's malice mingled with an inchoate desire to stick it to authority.

At one point, Rachel predicts that someday in the future a young nun in a convent, leafing through chronicles, "will find our time noted there, and she will marvel that such madness could have happened." Such a quasi-modern confidence — in the power of the written word and society's trope toward reason — sets Rachel apart from her peers. Today's readers might mull this commentary, which the author has placed in the mouth of a 16th century peasant midwife, and be struck by the audacity of its optimism.

Gabrielle Gopinath (she/her) is an art writer, critic and curator based in Arcata. Follow her on Instagram at  @gabriellegopinath.