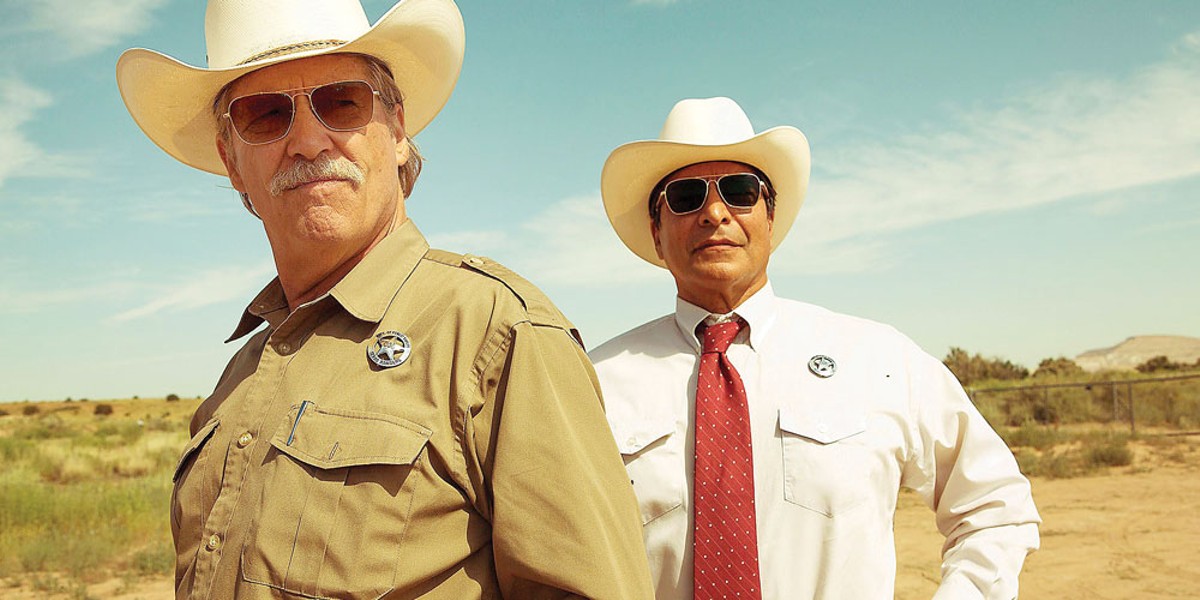 This is a very complicated case. You know, a lotta ins, a lotta outs, lotta what-have-yous.

HELL OR HIGH WATER opens on a panorama of desolate, dusty West Texas-ness to narrow in on graffiti scrawled on cement: "3 tours in Iraq but no bailout for people like us." The story is about two brothers whose family home is being foreclosed on by a corrupt bank that sold their now-deceased mother a shady reverse mortgage. Nothing in this film suggests banks are good and everything points to the idea that most people, if they could, would do the same thing these two are doing: systematically robbing the bank's branches to pay off the mortgage to the bank they're stealing from to get the house back.

They're smart — they cover their tracks and only go for small, unmarked, untraceable bills out of the cash drawers. Problems arise in part because open-carry laws mean bank customers also have guns, and that never ends well.

Ben Foster plays the older, loose-cannon ex-con brother. But it's his younger brother Toby, a straight-laced, quiet, responsible father of two (Chris Pine) who is the one to watch here: If you were going to make a movie with no dialogue and just facial expressions, you'd want Chris Pine, whose face you can read in a ski mask, as your leading man. When they're not robbing banks and riding around in cars, the brothers talk, and there are plenty of quiet moments of reflection about what's left for them now.

The soundtrack is a treat, with songs by Townes Van Zandt, Gillian Welch and Waylon Jennings, among others. The set is all rusting cars, dilapidated homes and dirt against a backdrop of hot, hazy sky. The camera speeds dizzyingly alongside the brothers' getaway cars, and we fly next to and above them as they speed through town and climb high bluffs.

Juxtaposed against the two brothers is the pair of Texas Rangers (the Law, not the baseball team) on their tail, played by Jeff Bridges and Gil Birmingham. Even though Bridges' character ribs his partner, who is part Mexican and part Native American, constantly with racist jokes, they're as close as the men they're chasing. These two have their moments as well. As Alberto says, his people lived on this land and then it was all taken away. And now the people who took it away are having it taken away from them.

Hell or High Water is, at first glance, an outlaw movie. But beneath its dusty, depressed streets, its smirking populace (one of the best characters in the movie is an elderly waitress — trust me, it's worth seeing the movie just for her), its stick-it-to-the-bad-guys vigilantism, the film is really about what poverty does to people. R. 102m.

DON'T THINK TWICE. Then there's the other kind of hard times, like when you're jealous because one of your friends gets famous and everyone starts fighting.

Don't Think Twice, written and directed by comedian-storyteller Mike Birbiglia, portrays a group of improv actors in New York City called The Commune, who are losing their performance space. They're tight-knit and they've worked hard for what they have. When they're not on stage or rehearsing, they're still together, mostly partying.

But when one of the members, Jack (Keegan-Michael Key), lands a spot on a long-running weekly TV variety show called "Weekend Live" (guess what that's based on), things begin to implode. Most of the group feels betrayed, becoming hostile and unsupportive. The film jabs at corporate entertainment culture, and it scores points there, with portrayals of "Weekend Live" members who are also hostile and unsupportive, and an egotistical producer who insults the actors.

I've always really liked Birbiglia's refreshing, somewhat self-deprecating comedy. Unfortunately, the dialogue veers so far from how people relate to each other that I literally cringed. What saves the film, however, are the performances by Key, who's charismatic and likeable as a complicated person whose decision weighs on him, and Gillian Jacobs as Samantha, Jack's girlfriend — she has an epiphany that saves the message of the film. Other fun performances include those by Tami Sagher, another member of the improv group, and Birbiglia himself.

One of the rules of improv, as we're told in the beginning of the film, is "it's all about the group." In other words, no showboating. The movie proceeds to then show us what happens when you ignore this rule — it's an honest look at the way in which people can have ideals and then betray those ideals when the going gets tough. The film manages to poke fun both at the large, corporate animal of entertainment and the small-timers. In this way, Don't Think Twice is an honest portrayal of how human fallibility ultimately drives us all. R. 92m. MINIPLEX.

SULLY. Tom Hanks stars in Clint Eastwood's film about the investigation of the pilot who saved his commercial passengers by gliding a plane into the Hudson River. R. 106m. FORTUNA.

DON'T BREATHE. Director Fede Alvarez's atmospheric heist-gone-wrong horror movie about teens trapped in a murderous blind man's home puts others — in and outside the genre — to shame with its solid story and earned scares. R. 88m.

FLORENCE FOSTER JENKINS. Meryl Steep as a 1940s wannabe singer socialite with no idea how bad her voice is. Hugh Grant co-stars as her enabling hype man. PG. 90m.

THE LIGHT BETWEEN OCEANS. Drama about a WWI veteran and his wife (Michael Fassbender, Alicia Vikander) who keep a foundling instead of reporting it. PG13. 133m.

PETE'S DRAGON. Live action and animation in a fantasy tale about an orphan (Oakes Fegley) and his dragon buddy in the Pacific Northwest. With Bryce Dallas Howard and Robert Redford. PG13. FORTUNA.

THE SECRET LIFE OF PETS. A family-friendly tale of rival dogs in New York City that doesn't really live up to its powerhouse cast, which includes Louis C.K., Jenny Slate and Kevin Hart. PG. 90m.

SUICIDE SQUAD. This mess of semi-random violence rattles on pointlessly as DC villains take on badder guys. With Margot Robbie as Harley Quinn and Jared Leto (briefly) as the Joker. PG13. 123m. FORTUNA.