Pass Me a Tissue

Freshwater Tissue banking on tan oak and a PR power-broker 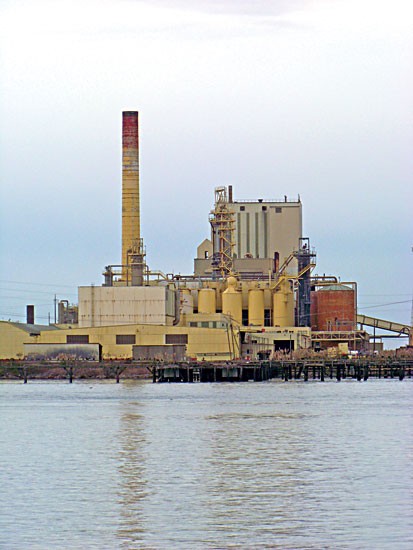 Ask anyone these days what they think will become of our dear old white lady of the spit -- the comatose pulp mill on the Samoa Peninsula -- and it's likely they'll say "parts."

Not surprisingly, that infuriates Bob Simpson, one of the guys who bought the mill from Evergreen Pulp -- formerly associated with the big paper manufacturing company Lee and Man -- last February.

The mill had closed in October 2008, casting 215 workers adrift, and Simpson's new outfit, Freshwater Tissue Co., planned to convert the beast into a green toilet paper mill (as in environmentally friendly) that would also produce electricity. They were going to hire a bunch of people back.

But the plan's hit some major snags. Like, procuring the $409 million needed to get the ball rolling -- and perhaps more importantly, securing a reliable source of wood chips to make the pulp. And Simpson even talked about these troubles in a news story in the Times-Standard last month, which began on a dire note: "The Samoa pulp mill may be taking its last gasps, likely to be sold off in parts as the latest bid to restart the plant is wilting."

"They just wrote us off as dead," he said.

True, Simpson said, he has sold off some old bearings and some scrap that was junking up the mill. But he has not given up. He continues to spend $100,000 a month to maintain the mill. And since February, Freshwater's been seeking to stick a straw into that big pool of federal stimulus billions that's being squirted here and there for others to enjoy. But they're getting nowhere. So Simpson's pumping up the PR volume by hiring an old friend and a nationally connected public relations expert from Washington, Dale Didion of The Didion Group.

Didion once served as a U.S. Treasury diplomat in Saudi Arabia, and worked on budget and policy in the executive Office of the President. He's worked for major PR firms, but now has his own, smaller company. But Didion's clients impress: The Nature Conservancy, Monsanto, AT&T, Warner Brothers, U.C. Santa Cruz, Loyola University and more. Most pertinent to this tale, he has long worked with Louisiana-Pacific -- the company that Simpson worked for in the 1990s, and where the two men met. It was Didion who helped spread the word about L-P's software innovation, Terra Vision, which allowed the public to examine the company's timber harvest operations via geographic overlays and which was rolled out in a big Smithsonian to-do, and again when L-P's mill went chlorine-free.

Didion also did work for Timbron, a company Simpson founded, but no longer is with, that recycles foam packaging from computers. Didion's also on the Save the Redwoods League's Board of Councillors and, said Simpson, he helped National Geographic with its recent redwood media extravaganza.

Now Didion's helping Simpson throw a big rally out at the pulp mill next Thursday, Oct. 22, at noon. They're inviting state and federal representatives and a slew of environmental bigshots.

"We think the Sierra Club will be there, and we're expecting Greenpeace and Baykeeper," he said. "We're asking Carl Pope [president of the Sierra Club] to come. We'll have union leaders. And we might get Amy Goodman. We believe we'll have satellite coverage. We're attempting to get the New York Times here."

Didion, last week by phone, said there'd be eight to 10 speakers at the rally, but the list was still developing.

Simpson thinks that if he can get his message out to the people in power, they will leap to his aid in obtaining some of that federal stimulus backing. What they want is to get a federal loan guarantee, which would allow them to get a loan from a major lending institution. If the tissue paper venture failed, the federal government would repay what was left of the loan. There also might be some grants available from the feds.

"Three years ago, this thing already would have been funded, and we'd be in construction," Simpson said. "But when the banking industry collapsed, it virtually made it impossible for projects to pick up funding."

The real kicker -- the thing he thinks will woo his rally-goers -- is that Simpson believes he's found a way around the pesky chips problem, the scarcity of timber byproducts during this time of slow housing starts: tan oak.

"Today, unfortunately, tan oak is crowding out redwood and fir trees because of all of the over-harvesting for decades that we have seen in the coastal redwood forest," Simpson said. "And it's got sudden oak death syndrome -- and what are they doing with it? They're killing it with herbicides. Well, that just creates fuel in the forest and eventually we have big fires like we had in Mendocino last year. And it continues to spread herbicide in the forest."

So they could put the tan oak to work in the mill, making t.p. and generating electricity.

"If we start up we will be the first carbon-neutral pulp mill in the world," Simpson said. "We will eliminate the use of natural gas, and we will use bark, sawdust and shavings in a new gasification system, which comes from a renewable product -- which means we will be using less than is growing in the forest. So it's actually a greenfield plant. And we create, immediately, 425 high-paying jobs in Humboldt County, and then we create another 2,550 indirect jobs -- all the companies that support and do business with us. ... And if everyone buys into the fact that we eventually will run out of oil, then I don't think it's in our best interest to be dependent on foreign countries to produce essential products."

Well, who knows? If Simpson's plan impresses the people in power, maybe our sleeping white lady of the spit will reawaken.