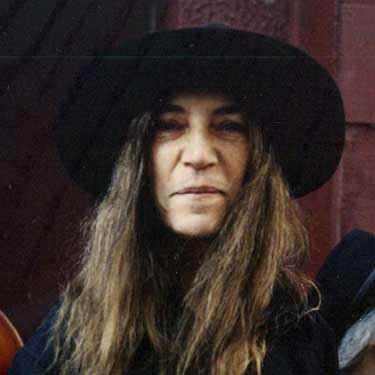 This is the girl who changed it for all of us girls in the ‘70s. Patti Smith. She was beyond cool. Counter culture and cultured. She was a bona fide poet. She was an artist. A balls-out skinny wisp of a woman with an electric guitar hanging from her shoulder. Her voice, in modulating harmonies, belted out our raw desire, our hunt for beauty. Through Patti Smith we sought who we were in the world, as she exclaimed it for us.

The Van Duzer felt like a small room last Thursday when Smith took the stage with her longtime guitar player Lenny Kaye. She acted like we knew each other as she sang to us, recited poetry, told stories (in her Jersey accent), made us laugh. Ever in blue jeans, a loose-fitting black suit jacket and long brown hair haloed with strands of white, she could have stepped right out of one of one of Robert Mapplethorpe's iconic black and white photos from decades ago.

Smith read from Just Kids, her love song of a book chronicling her relationship with Mapplethorpe, their prelude to fame, and tenure at the infamous Chelsea Hotel, arriving at the maelstrom of all things ‘60s, when it seemed the world would explode

While singing a lovely and plaintive Helpless, by Neil Young, Smith lost her place for a moment and later intimately explained, "I know the song. Sometimes I start thinking about my late husband (guitarist) Fred ‘Sonic' Smith," her naked sadness, making the theater feel smaller, yet.

Her voice is in great shape, moving from rich and evocative to gravelly and raucous. After relating the backstory of writing verses for Because the Night at the Chelsea one night while waiting endlessly for Fred to call from tour with his own band, Smith and Kaye played a rousing version of her only No. 1 hit, emphasizing the famed lines, "Have I doubt when I'm alone/Love is a ring the telephone."

Asked by an audience member about two of her art forms she said, "Poems and songs are different things. Songs I'm writing to you, to the people ... a poem, I‘m not conscious of the listener. I'm very involved in the language of the poem. A poem may be more beautiful, but a song more generous."

And a magnificently generous evening it was. So many of us were shaped by the same forces that drive her work. Patti Smith onstage singing and reading, that is life of the artist and whatever meaning and universal feeling we get from that, it is happening right now. She is Patti Smith. 20 or 30 or 40 or 65 years old, she is true to herself and that is the reason her work continues to inspire.