Paul Reiser is Back at the Mic 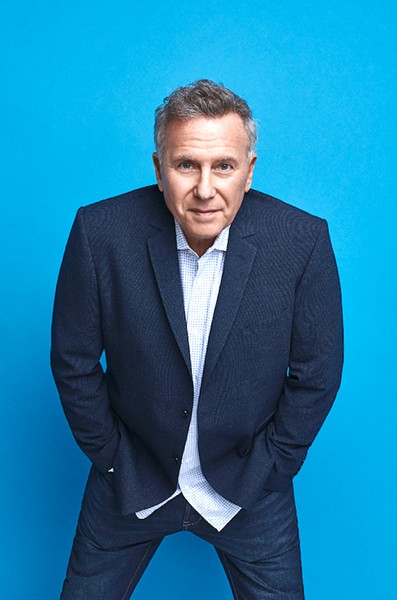 Paul Rieser started with stand-up, prior to his roles as the jaded Modell in the cult classic Diner, the era-appropriately smarmy villain Burke in Aliens, dotingly awkward husband Paul Buchanon in the series Mad About You and, most recently, Dr. Owens, the better of two evil scientists in Stranger Things. He's also contributed to the annals of comedic memoirs with Couplehood (1994), Babyhood (1997), Familyhood (2011). Now, after 20 years of focusing on film and TV, he's making his return to stand-up and stopping at the Van Duzer Theater on Sept. 9.

"Stand up is what I love and what I started out doing. So, last night was the first night that I've done an actual show, a full-length show, in six months," Resier says. "One of the things that's been so exciting about going back into stand-up is every time, every time, it feels exactly like it did 100 years ago." Six months ago, Reiser returned to the stage for the first time in nearly 20 years. "I love how much each night varies," he says, "how identical it felt to when I went up when I was 18. ... It's just as cool and fun when you come up with a moment; its just as frustrating when you miss a moment, it's just as much anticipation." He speaks of the adrenaline and fight-or-flight response that come over you when you step on stage, too.

Reiser reminisces about meeting fans on book tours or shows following the airing of Mad About You. "I knew we were a hit and we were renewed, people were watching," he says. "It felt really great." But it wasn't until he toured years later that he understood the show's full impact, when fans would tell him their favorite episodes, share what they'd taken to heart or tell him how they walked down the aisle to the theme song (which he co-wrote). With stand-up, though, the feedback is immediate, instant and pure. For better or for worse.

Though COVID has changed some aspects of performing, particularly in front of a masked audience. "It's totally understandable and I only recently stopped wearing a mask in public and when I'm out. But it's not the greatest thing for comedy. A lot of times you're not laughing, but you want to see a smile," he remarks, smiling himself. "You know, I've literally had coughs and colds — not recently! — but you go on stage and you're fine," he says, adding with a chuckle, "Tell your audience I won't be coughing on them."

Reiser's show at the Van Duzer will be longer than the sets he started out with, too. "When I went back up ... 10 ... 11 years ago, I had maybe five minutes." He describes talking to other performers during his return, asking them how much time they had. "An hour? That's impossible." He recalls looking at his joke journals, where he built five minutes into seven minutes into nine minutes and recalled how great that felt. Then he delves into the process of taking nine minutes, turning it into 12 minutes, then 20, before paring it down to 10 and moving forward — a Sisyphean task he seems to take to with joy and fascination. "Part of what I loved about the process was the methodical step-by-step building, brick-by-brick of it," he says. "It's so old school."

This is Reiser's first trip to Humboldt County, though the name does ring a bell. "Yes! There's Humboldt Fog, we eat the cheese. ... We like cheese in our house." Beyond that, he admits he doesn't have much familiarity and asks politely how Arcata is pronounced. "Someone asked me, 'How do you choose where to go?' I say that I'm not picky. Someone calls me and says, 'Would you like to perform?' And I say, 'Yes,' and I go there. I'm very easy. I don't play hard to get." Lucky us.

Henry Ellis (he/him) has been a freelancer with the Journal since 2011; he has never made a deadline.