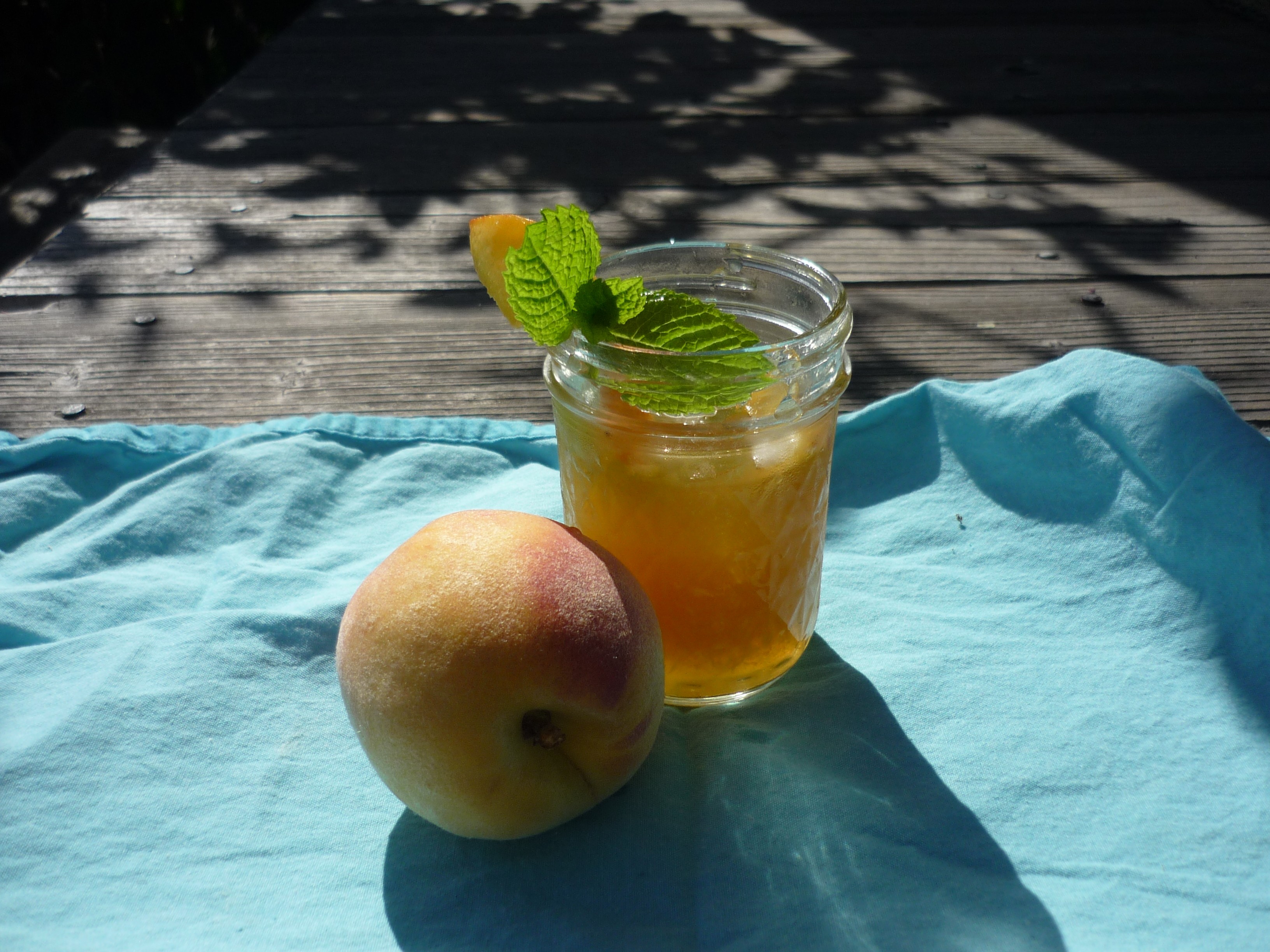 It is almost too late to write this column -- almost. Peach season is winding down, but as of this writing I'm still getting sweet, local summer peaches in the market. So move quickly. You might need to get this done tonight.

We begin, of course, with bourbon. Maybe you're not a big bourbon drinker; I never was, either. I once made some sort of bourbon and baked brie appetizer for Thanksgiving and bought the smallest bottle I could, knowing I'd have no other use for the stuff.

I was crazy. I was wrong.

Bourbon, if you're not already acquainted with it, is a type of whiskey made mostly from corn. By law it must come from at least 51 percent corn, and the remaining grains can be rye, barley, wheat, and so on. It must be aged in a new, never-before-used American oak barrel. (That provision was put into the law to satisfy the barrel coopers' union. How I long for the days when the barrel-makers had clout in Congress.) Bourbon does not, contrary to what certain Southerners will tell you, have to be made in Kentucky or Tennessee. Bourbon could come from a distillery in San Francisco, New York City, or (please, oh please) Humboldt County.

The combination of the corn and the delicious vanilla notes from the American oak make bourbon an exceptionally sweet whiskey, and the only kind I'd mix with fruit and sugar, as we're about to do. While there are many fine bourbons on the market, you don't need to spend a fortune. Maker's Mark, at just about twenty bucks a bottle, is actually a highly rated, award-winning and very tasty bourbon. Every liquor store in town carries it.

If you want to get fancy, I'm going to suggest a variation that includes Domaine de Canton ginger liqueur. This is one of those luxurious liqueurs that I tend to use in small quantities, so a thirty-dollar bottle will go a long way. If you don't want to spring for that, but you're really into ginger, just throw a few slices of fresh ginger under the muddler. With enough bourbon, you can hardly go wrong.

Now, about those peaches. Bourbon doesn't play nice with just any kind of fruit.  It's dreadful with berries and tropical fruit. It's delightful with sour cherries (in an Old-Fashioned, which we'll get to someday), and it's heavenly with a little orange liqueur -- but then again, citrus is a kind of all-purpose mixer that brightens up just about any cocktail.

But peaches? Bourbon and peaches were made for each other.

So get the ripest, runniest peaches you can, and accept no substitutes. (I wouldn't disapprove of trying this with thawed frozen peaches if you can't get fresh ones, but that's between you and your cocktail.) You're also going to need some fresh spearmint, which I hope is thriving in your garden right about now. And sugar. Some Southerners insist on powdered sugar, but it generally contains cornstarch, which gets lumpy and weird in a cocktail. Superfine or regular sugar will get the job done. If you're making a batch of these, take the time to make simple syrup by combining equal parts sugar and water in the microwave or on the stove, bringing it to a boil to dissolve the sugar, and putting it in the freezer to cool down. It blends much more easily and helps avoid the not-altogether-too-terrible problem of all the sugar settling at the bottom of the glass. (Simple syrup doesn't store well, so just make as much as you need for the evening.)

In a cocktail shaker (or a mason jar, or any large, sturdy glass), combine a quarter to a half of the peach, most of the mint (save a few leaves for garnish), sugar, and the ginger liqueur or ginger slice. Gently crush them with a muddler or wooden spoon.

At this point, you have a decision to make. I like to mix this up in a mason jar, top it with crushed ice, fill it up with bourbon, and just drink the whole mess. I consider it a waste to toss out a booze-soaked, crushed-up peach. Isn't that a fruit serving? But you might not like a bunch of mashed produce at the bottom of your drink, in which case you ought to add the bourbon, shake well with ice, and strain it into a glass over crushed ice at this point.

The crushed ice is really important. If you don't have an ice crusher (What? No ice crusher?), wrap some ice in a dishtowel and whack it with a hammer.

In any case, taste it and adjust the proportions to your liking. I generally add a little more bourbon at this stage, and would have written the recipe that way, but a serving of hard liquor is a paltry 1.5 ounces and I feel obligated to give you a recipe that doesn't veer too far from that sanctimonious standard.

Where should you go? To your porch, of course. Bourbon was made to be sipped on a porch, in good or not-so-good company, preferably with a guitar or at least a radio nearby. Experience has taught me not to set the glass down when the chickens are around, or they'll pick the peaches out and run away with them. So raise a glass with any non-feathered friend, and enjoy.