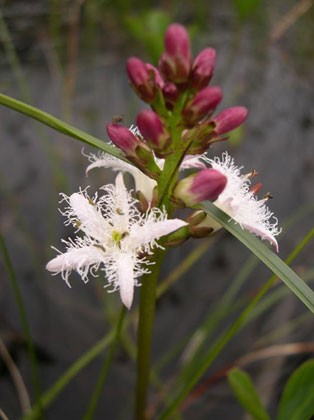 This Wednesday, in Humboldt County Superior Court, the Honorable Judge John Feeney will consider the matter of alleged peat bog miners Daniel and Robin Wojcik, owners of McClellan Mountain Ranch near Bridgeville, and whether a cohort of 23 agents from several Humboldt County departments and state and federal agencies have the right to inspect for code violations, over the course of several weeks, on all of the Wojciks' parcels in the area.

Yes, we said peat bog: an ancient, geologically slow accumulation of dead plant matter in a freshwater wetland, and a botanical rarity in Humboldt County -- and in California, for that matter. The county, according to documents on file at the courthouse, believes there are several peat bogs on the Wojciks' Bridgeville area properties, as well as neighboring parcels. At least one of these peat bogs, on a Wojcik parcel, is known to harbor several rare and endangered species, two California species of special concern (the northern red-legged frog and the western pond turtle), and the locally rare bogbean. Bogbean, Menyanthes trifoliata, is a pretty, bean-like plant with furry, white, star-shaped flowers that's common in places like the Sierra Nevada -- or in Europe where it was used to brew beer before hops came along -- but is only known to occur locally in this one location in Humboldt and in three other North Coast California bogs, one each in Del Norte, Mendocino and Marin counties.

The county's documents note evidence of historic peat bog mining done by someone else. But the county suspects the Wojciks might be illegally mining peat from some of these bogs, or be planning to in the future, possibly to the detriment of the rare peatland habitat -- under California mining regulations, peat is defined as a mineral; to harvest, or "mine" it, you need to get a mining permit, file a reclamation plan and provide assurance you can pay for the reclamation.

The county also suspects illegal grading of eight acres of timberland, unpermitted construction of a processing plant, and several areas cleared for drying the peat, among other violations.

On April 2 Superior Court Judge Timothy Cissna issued an administrative warrant for the county's Code Enforcement Unit to inspect 14 of the Wojciks' Bridgeville area parcels, and to bring along whatever agents from other agencies it wanted to. Incidentally, the CEU was only able to get the warrant after obtaining an exemption, from the county Board of Supervisors on March 23, to the county's moratorium on issuance of inspection warrants to the beleaguered CEU. They achieved several exemptions that day, for properties around the county.

If the inspection had occurred, it would have been undertaken on seven specific days between April 6 and April 28, according to a letter that county planner Meghan Ryan sent to the Wojciks' attorney, Larry Kluck, dated March 23, when she was still trying to get the Wojciks' consent for the inspection. The inspection team would have included several employees of the county's planning and building divisions, CEU, county counsel's office and environmental health department, as well as employees of the U.S. Army Corps of Engineers, the Environmental Protection Agency, the U.S. Fish and Wildlife Service, CalFire, the State Department of Fish and Game, the state Office of Mine Reclamation, and the North Coast Regional Water Quality Control Board.

But then, according to the court documents, on April 5 the CEU was served with an order to show cause, filed by Kluck and signed by Judge Feeney. And that is the subject of this Wednesday's hearing: The county must show it has just and probable cause for wanting to inspect all of the properties listed on its warrant. The order came days after Feeney granted Kluck a temporary restraining order against the county, which stopped the CEU and any "allied agencies" from conducting their planned inspection. It also "recalled" the warrant. So the inspection, for now, is off.

"Their warrant is overbroad," said Kluck, reached by phone Monday. "It is unreasonable. They're requesting multiple agencies to visit over multiple days. But you've got to show probable cause before you go on people's properties."

Kluck said the county had only identified a few parcels with possible violations, and that it would be fine if they wanted to visit those. But the rest of the parcels? "It's a fishing expedition," he said.

The county's documents admit that possible peat mining-related violations were identified on just five parcels, either during two visits by Ryan and some DFG biologists in 2009 (with the Wojciks' consent, and initially just to check out a possible grading violation reported by a neighbor), or in followup examinations of aerial and satellite photos of the area. But Deputy County Counsel Davina Smith later broadened the inspection request to include the rest of the Wojciks' Bridgeville-area parcels, suspecting that there might be bigger violations than mere grading -- peat bog mining which could only be discovered on the ground.

On Tuesday, speaking generally and not specifically about this case, DFG botanist and wetlands expert Gordon Leppig explained that peat bogs, which can accumulate by mere meters over hundreds of thousands of years, are rare in California, most of which is too hot and dry for them to form. There are only a few peatlands on the California coast: Crescent City Marsh in Del Norte County; Big Lagoon Bog near Big Lagoon in Humboldt County; Inglenook Fen in the Ten Mile Dunes north of Fort Bragg; and another one in Marin County. The coast's southernmost bog, noted Leppig, is long gone, having morphed over time into a Chevron station in downtown San Francisco.

"Big Lagoon Bog is a famous one," said Leppig. "We have more rare plants at Big Lagoon Bog than almost anywhere else in the area."

But it doesn't have bogbean, unlike one of the mountain bogs -- also rare in California -- up McClellan Mountain way. And that's something to consider.

"If there's something that's the only population in the county, do we care about that or not?" Leppig said. "If we eliminate it, that's it."