Pedaling as Fast as They Can

Bike supply can't keep up with demand during the pandemic 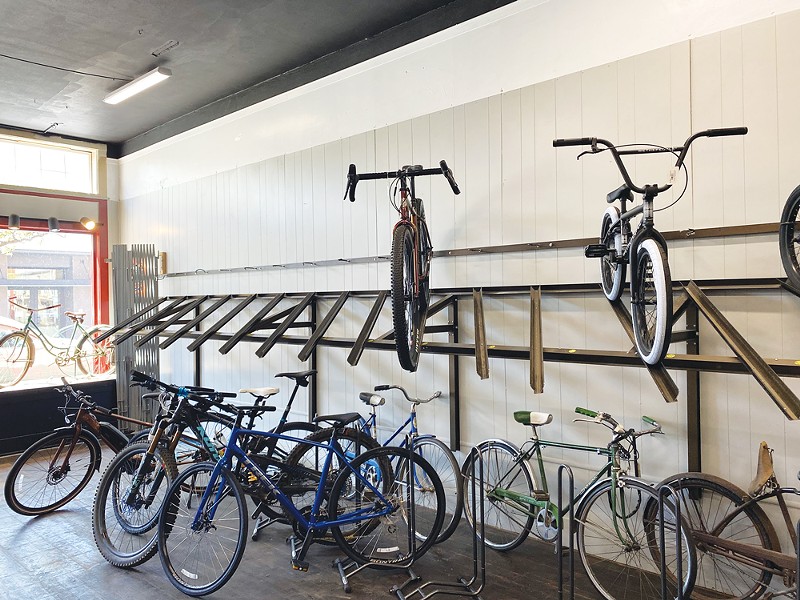 Walking into a bike shop in Humboldt, you'll be greeted by the faint smell of rubber tires that hangs in the air and the clanging of wrenches, but walking over to the bike racks, you'll likely find them mostly bare.

Bicycles and even bike parts have become hard to come by in the pandemic.

"Bicycles are backordered until 2022 ... [if] someone wants to buy a bike today, they might have to wait a whole year to get their bike and normally it would take a few weeks," says Sage Saatdjian, co-owner of Moon Cycle in Arcata.

Sean Tetrault, one of the owners of Revolution Bicycles, says that he noticed a surge in the demand for bicycles about two months into the pandemic. At first he mostly had parents coming into the shop looking to get new bikes for their kids and for themselves. "Spring is usually our busy time but during the shutdown spring, we fully expected to just kind of tread water as everybody else but we were pretty surprised people just started coming in and coming in," he says. With the closure of gyms, he saw a broader demographic of people coming in for bikes. He suspects that being stuck at home made more people want to get outdoors, too.

Saatdjian also says that at the beginning of the pandemic, the staff was busy with a lot of people coming in to get their bikes repaired and road-ready. "People were taking their old bikes out from their garage that they hadn't been riding for a long time and getting them ready," they say.

Along with biking for leisure, Saatdjian also says some of their customers were planning to use their bikes primarily for transportation. Saatdjian thinks that before federal assistance came and people were losing their employment, they turned to biking as a cheaper alternative to driving a car and spending money on gas.

Now the problem is the supply of bikes can't keep up with the demand. "Unfortunately, now we're on the backside of the situation where we're having supply chain issues," Tetrault says. "Now, like many other industries, we are challenged by what we can literally get through the door, which isn't much."

Sprout Plankton, co-owner of Moon Cycle and the coordinator of the Eureka Bike Kitchen, suspects the supply chain has broken down at several points leading to a shortage of bikes and bike parts. The shortage closed Moon Cycle down at the end of April of last year. "It was just a hassle, like, 'Oh, we can do two things but the other three things you need, you have to go somewhere else,'" Plankton says.

Recently, Moon Cycle opened back up but even more than a year later, bike parts are still scarce and seem to be available in cycles. Usually, shop owners can see on their supplier's websites when a product is expected to come back in stock but the availability of many products is uncertain now. "We couldn't get tubes — we literally ran out of tubes — which is pretty unheard of," Saatdjian says. "It's really unprecedented and lots of other super basic parts are completely out of stock."

Those who were fortunate enough to buy one or get their old bike repaired are taking advantage of their good luck and spending more time outside.

"Things are still not completely open so a lot of people are still riding bikes and, hopefully, a lot of people have realized how much fun bikes can be," Tetrault says. "The cycling infrastructure here continues to grow and get new and better trails off road and paved trails, hopefully more people stick with it."

Nancy Garcia (she/her) is a freelance journalist finishing her degree at Humboldt State University this fall. Follow her on Instagram @ngphotoj.