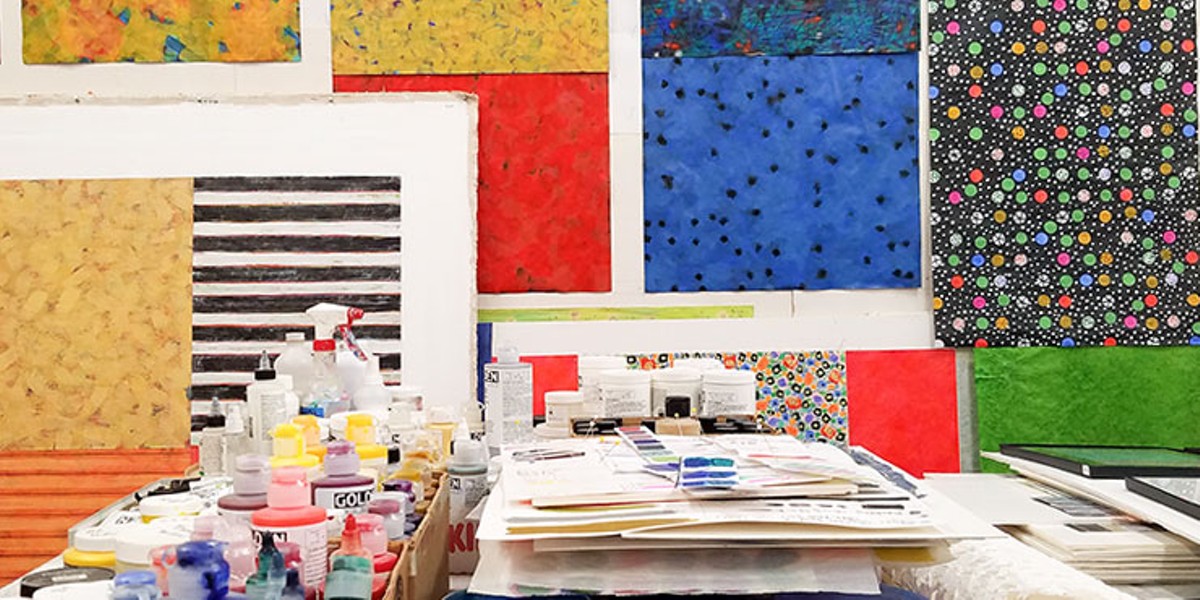 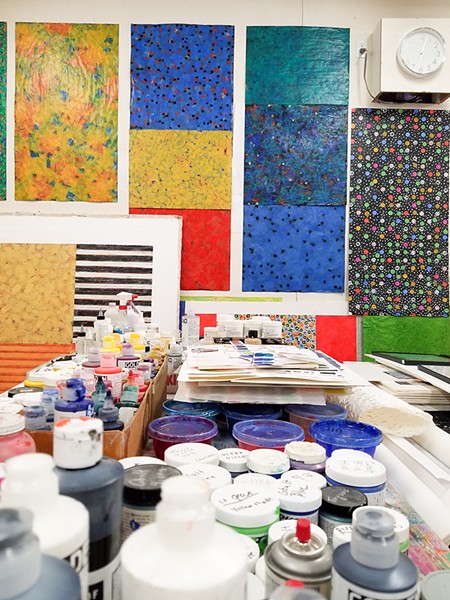 The interior of Joan Gold's dazzlingly patterned Eureka studio, where works in progress hang on the walls. Photo by Gabrielle Gopinath 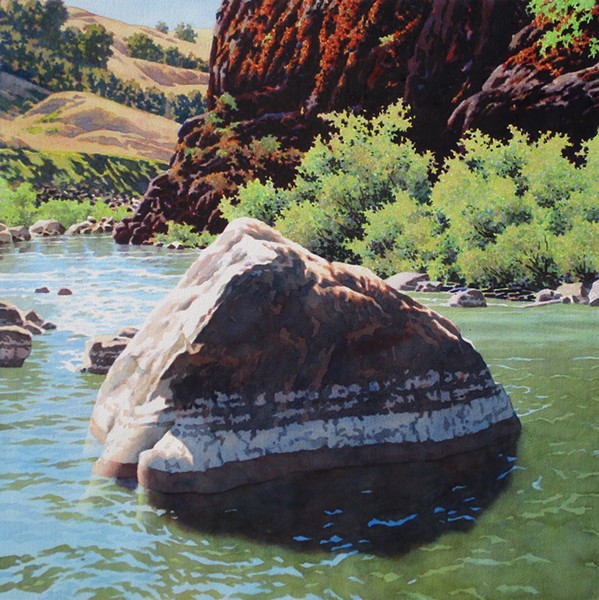 It's the 20th anniversary of North Coast Open Studios and Monica Topping, the event's hardworking organizer, is in a hurry. NCOS has 17 first-time participants this year, she says, as well as an impressive roster of "charter artists" — those who have exhibited since the inaugural North Coast Open Studios event two decades ago. "We try to have between 10 and 20 percent new artists in any given year," she says. "We try to include youth art, as well as art made by new and upcoming artists — not all of whom are necessarily young. A lot of times new artists are people who have been making art for years, who finally decided to take the opportunity to bring their work into the public eye."

Topping works for months ahead of time to make the event run smoothly but once the event gets under way, "it's no longer mine," she says. "It becomes the artists'. And I love that transformation that happens. I just get to show up, take pictures and say hi. Every year I try to visit as many artists as I can." She emphasized the diversity and variety of work on display, as well as the different ways for viewers to approach the event. Those looking to win a gift certificate by playing the event's popular bingo card will maximize that diversity. Those with a particular interest in a certain medium could specialize "and just do two weekends of ceramics," while a trip organized around the theme of place could result in "a special trip to see art being made in your neighborhood."

Likewise, artists approach the event in different ways. Charter member Alan Sanborn first showed his watercolor landscapes in the inaugural North Coast Open Studios event 20 years ago. He has been hosting open studio events on June weekends most years since, so much so that he is able to quip, "I've never even seen North Coast Open Studios!" In Sanborn's Arcata home studio, light-filled watercolor renderings of sites like Agate Beach and the Russian River crowd the walls, seeming to bloom in the ample natural light. He remembers that the event's early years "started out pretty low-key and small. But probably by the third year, I guess that takes us back to the Clinton years, the economy was booming. For two years in a row, I sold everything on the walls." he says, beaming at the recollection. Though sales have dwindled since what Sanborn remembers as their peak, he relishes the experience as much now as he did then. While making sales is nice, he says, "we do it primarily to show our work to the community, to make contact with the audience. To show that there is a cultural interest out there."

Across town in her Eureka studio, veteran painter Joan Gold's abstract works occupy every inch of available studio wall. Gold, who is preparing for a solo show at Black Faun Gallery in November, explained that she often works simultaneously on multiple paintings this way. Entering her studio feels like stepping into a kaleidoscope. Paintings at every scale and stage of completion surround you, dashed and patterned with vibrating matrices in azure, turquoise, hot pink, tomato red and parakeet green, layering on top of other paintings for a retinal experience that's nothing short of dazzling.

On the other side of Humboldt Bay, ceramicist and second-time Open Studios participant Jen Rand was at the Samoa Women's Club, showing a graceful range of high-fired stoneware on an oceanfront veranda. Many of her pieces are ornamented with a rhizomatic design that recalled tree branches or roots. She was happy to talk about process: "I start with a dark clay called Black Mountain and then I put on a liquid porcelain slip, and then a glaze on top of that." The process of firing at high temperatures, she says, allows each piece's ultimate appearance to be shaped by chance.

At the same venue, artist and designer Annette Makino is showing a selection of her popular greeting cards featuring Japanese-inflected watercolors and haiku. She describes the event as "a chance to connect directly with people. I am creating for the market," she explains, "and I sell a lot in stores and online. But in those venues, you don't get that sense of direct connection with the members of your audience like you do here."

"People have come up to me in the past (at North Coast Open Studios) and told me about a particular piece, describing why it has been meaningful to them," Makino recalls. "One time a woman told me that she had been having a fight with her sister and she sent her one of my cards, hoping to make peace, and in fact they were able to be reconciled. And, of course, I was happy to hear that. For me, laboring in my studio, the work doesn't really get reconciled until it goes out there in the world."

The 20th annual North Coast Open Studios event runs June 1-3 and June 9-10 at locations from Trinidad to Scotia. The free schedule is available in newsstands and at www.northcoastopenstudios.com