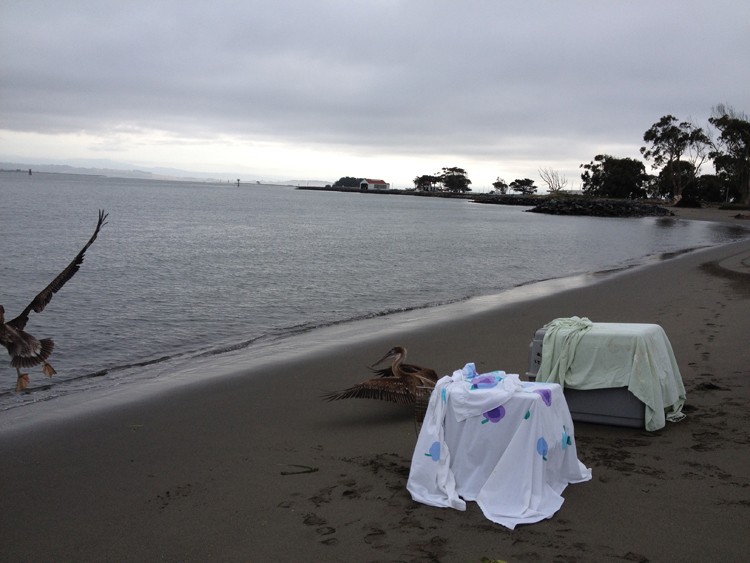 There are certain benefits to being a pelican, no doubt. A big old lunchbag of a bill. Happy hours spent soaring, wave-like, in the peloton with one's fellows. The suspension mid-air, followed by the savage, falling strike into salty sea -- exhilaration! And sardines. Herring. Small, crunchy goodnesses.

There are disadvantages, however, that come to some poor, hungry, often juvenile pelicans -- those who stray into fisherman-land to scavenge for fish scraps at cleaning stations. Hundreds have done so locally this year (and years previous), wallowing in the filthy, oily water from bins or pipes at cleaning stations in Crescent City and Shelter Cove. The oils clog the birds' feathers, inhibiting their ability to keep warm and dry, which kills them.

Those particular pelicans could use some more benefits, and this very weekend there are two (benefits) being thrown for them -- or, rather, for the folks who've been rescuing and cleaning them in hopes of saving their lives. As of late last week, according to Bird Ally X, 74 birds had been washed and released and 130 more were still at the Humboldt Wildlife Care Center. Bird Ally X said it's been feeding the birds more than 400 pounds of fish a day. The center is in constant need of volunteers. And money.

Saturday, Aug. 25, from 10 a.m. to 8 p.m., Blue Ox Millworks hosts Party for the Pelicans: Brews for the Birds, a benefit for Bird Ally X and Humboldt Wildlife Care Center. There will be puppet shows, face painting, food from Bless My Soul Cafe, standup goofiness and MCs from Ba Dum Cha, beer, a raffle, a silent auction and lots of live music: Bud Rogers, Lance Torgerson, SambAmore, The John David Young Trio, The Mighty Redwood Ambassadors, Survival Reggae Band, Josephine Johnson and Sam Whitlach, Medicine Ball and more. A $5 donation is suggested. The Millworks is at First and X streets in Eureka.

Sunday from 4 p.m. to 5:30 p.m., there's a Save The Pelicans benefit cruise aboard the jolly little Madaket to raise money for the wildlife care center. The Madaket folks along with The Wine Spot, Lost Coast Brewery, Shamus T Bones and Eureka Main Street are hosting the beery, winey, hors d'oeuvresy cruise. A wildlife expert will be on hand to explain the issues as the vessel visits some pelican hangouts in Arcata Bay and at the mouth of the Elk River. Cost: $30 per person. Boarding is at 3:45 p.m. at the foot of C Street in Eureka. Info: 445-1910.