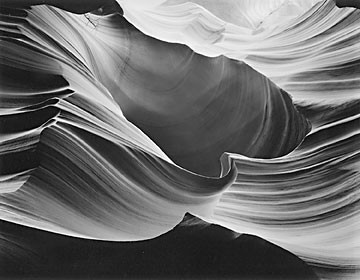 Call it alchemy. It isn't, really, but there is a certain degree of sorcery involved in the creation of a fine photo using the old-school method. You know, the kind of print made back in the day, when photographers used film and did their post-shoot work in a darkroom, not at a computer screen. More specifically, we're talking about the type of black and white photograph that utilizes light-sensitive silver halide salts in a gelatin base on paper.

Of course, Barnbaum's work wasn't deemed traditional when he began as a hobbyist in the '60s — it was just photography — but you could say he draws on a tradition. Looking at his images of mountains and deserts it's not hard to see the influence of photographers like Edward Weston and Ansel Adams. In conversation he mentioned that the "one and only" photo workshop he ever took was one run by Ansel Adams in Yosemite in 1970.

As his skill developed, Barnbaum started leading workshops of his own. His home in Granite Falls, Wash., includes a large multi-station darkroom where he teaches master classes on the fine art of printing. He also leads photo expeditions into remote areas: the Great Smoky Mountains, rocky canyons in Utah and the tropical forests of New Zealand, and one he calls "The Art of Seeing and Creating," as it relates to fine art photography.

The Piante show, titled "Stone," is one slice of his large body of work. Whether the prints show sandstone walls in Southwest canyons, rocks pockmarked by the ocean or man's use of stone for buildings (particularly the sweeping arches of cathedrals), the subject is always the play of sunlight on surface and the myriad shades of gray that light creates.

When it comes to capturing that play of light, Barnbaum is unequivocal: traditional silver prints are better than digital prints. "That's an unalterable fact. It's richer in every respect," he said, going on to explain that even the finest digital print cannot achieve the deepest blacks found in a silver print, nor the range of tonalities. Barnbaum has a lot more to say on the subject. He's laid down his opinion of digital photography in an essay on his website (www.barnbaum.com).

On Friday afternoon, before I called the photographer at his home in Granite Falls, I went to the Art Center in Eureka to see his work. Sandy Flippin, resident framer (and Art Center owner) was preparing to cut mats for the 33 pieces in the Piante show. As I was helping Flippin unpack the mounted prints, I shared some of Barnbaum's thoughts on digital photos.

Among other things, the photographer mentions how easy it is to use Photoshop to remove something like a lightpole that mars your image. The danger in that ease is that it can lead to something he calls digital abuse, "an acceptance of initial sloppiness [in composition] with the thought that it will be corrected later."

Flippin noted that he'd seen the effects of that particular slippery slope many times. As we talked, he laid out the prints giving me a preview of the show. We came to the image titled "Hollows and Points, Peach Canyon," a gorgeous sweeping abstract showing a wind-blown canyon wall. Near the top a bare branch interrupts the flow of sculpted rock — Flippin supposed that it would have been possible to remove the branch in a digital print.

I relayed what he'd said to Barnbaum when we talked later that day.

"You know, it's an interesting thing," he said. "Over the years I've met people who've looked at that photograph and said, 'I was attracted to it, and when I saw that branch, that did it. I had to buy it.' Others told me, 'I was attracted to it, but when I saw that branch, it just ruined it. It cut into the thing and I can't even look at it any more.' I'm relatively neutral about it myself. It was there. It was a small branch sticking out from a log embedded way up between the walls. I remember initially thinking 'I wish that wasn't there.' Then my thoughts changed to a neutral point. It kind of lends a bit of reality to a situation that looks completely unreal."

Other prints in the Eureka exhibition show the same sort of yin-yang tension, taking something as solid and hard as rock and showing how it can be soft, even ethereal. The works covers more than 30 years in Barnbaum's career, but, he says, it's not exactly a retrospective.

In part because he uses a 4-by-5-inch view camera and long exposures, one thing you don't see is people. In fact only one piece in the show has a person in it. He calls the photo "Old Man and Dog, Opichen," but the subject is more the church behind them than the figures.

"Of course that guy was almost fossilized," said Barnbaum with a laugh that led to a story. He'd actually set up his camera to shoot a color photo of the wooden doors of the Mexican church.

"I was just reaching for my film holder when this old man — and he must have been 200 — he came around the edge of the façade with his dog taking about one step every 10 seconds. I thought he might walk into the picture while it was being exposed. Then he just stopped and sat down. And I realized I was doing the wrong photograph. I moved the camera back, put on a different lens, changed from vertical to horizontal, changed from color to black and white. This guy was just immobilized. He and his dog just sat there for 10 minutes with no movement whatsoever. It was way better than the details of the doors. It was one of those things that just happens."

Was what happened magic? Not really, but there's a certain magic in the photo, and in all of Barnbaum's work.

Bruce Barnbaum's photo show "Stone" runs from March 1-31 at Piante Gallery at 620 Second St. in Eureka in conjunction with a show of ink pen drawings by Kay Harden. A reception for the artists will be held Saturday, March 1, from 6-9 p.m. during Arts Alive!