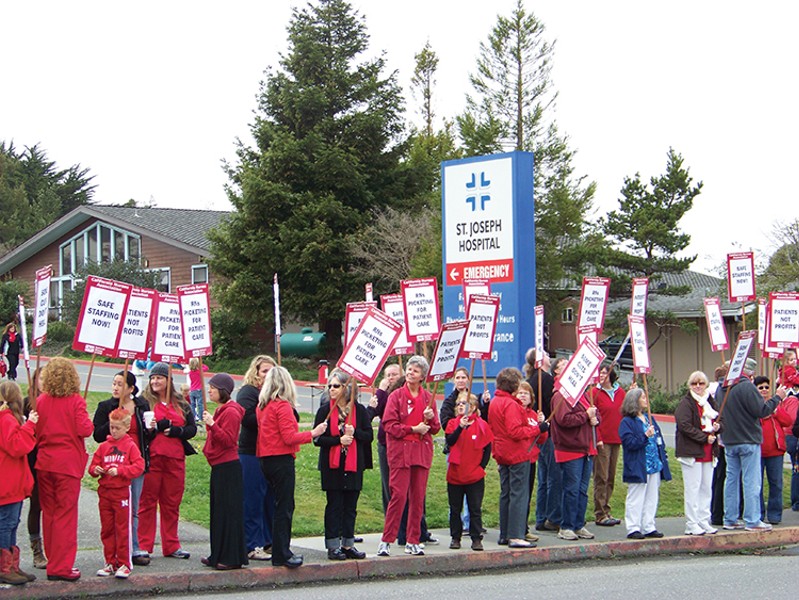 Photo courtesy of St. Joseph Hospital. With this telehealth unit, a doctor from afar can interact with patient and nurse privately and even listen to the patient with a stethoscope.

More than a hundred protesting nurses, their families and friends filled up two blocks of sidewalk in front of St. Joseph Hospital last Wednesday evening as rush-hour traffic raced by on Harrison Avenue. Most of them wore red -- the color of the California Nurses Association -- and hoisted red-and-white signs:

Every time a passing car honked at them, they responded with wild cheers.

That same evening, nurses picketed and held candlelight vigils outside three other St. Joseph Health System hospitals in California -- in Petaluma, Apple Valley and Santa Rosa -- where new union contracts are being negotiated. The CNA represents all but the nurses at Santa Rosa Memorial, who have an independent Staff Nurses Association. The unions together represent more than 2,000 nurses, according to a CNA news release. It said that at each hospital, "managers have taken a hard line in opposition to proposals made by RNs that the nurses say would significantly improve patient safety."

The nurses say that cuts in support staff are leaving them feeling overworked and tired. They want the staff restored. In Eureka, where nurses are bargaining for their fourth contract since they unionized 10 years ago, there is also the matter of the "doc-on-a-stick." That's a video screen on a pole that a nurse wheels into the patient's room, so a doctor from afar can videoconference in to consult with a patient with the nurse's help. The hospital is using one of these for its acute and chronic kidney patients. It's impersonal, accused another CNA news release, and takes up too much of a nurse's time.

In a statement released by the hospital, Carol Reeder, chief nursing officer, praised the hospital's hardworking nurses and affirmed their right to picket. But she accused the nurses' unions of falsely claiming that the pickets were about patient safety in order to "apply pressure on our hospitals when negotiating a new labor contract." The hospital would never compromise patients' safety, she said. However, she said, the "looming implementation of changes in federal health care reform legislation, diminishing reimbursements for care and difficult economic times" had forced the hospital to cut expenses and reinvest revenues into such things as new technology and the new $145-million patient-care facility opened last year.

The nurses want one nurses' aide for every eight patients on the day shift on some floors, and one for every 10 patients on the night shift (the ratio for both now is one per 20). They want extra staffing to be determined by how sick patients are, not by budget grids. They want more nurses kept on call. They want an extra nurse on shift to admit patients to the emergency room. They want the night shift lift team -- of at least two people -- restored. And they want St. Joseph to talk with them, as they say the contract requires, before introducing new technology like the "doc-on-a-stick."

The nurses, Johnson said, aren't asking for higher wages. They're asking for the hospital to re-examine where it spends money.

"What we're asking for is help," she said.

Johnson has been at St. Joseph Hospital 28 years. She's on the Professional Practice Committee at the hospital -- made up of bedside nurses working to solve patient safety issues. Recent layoffs -- including 62 last year -- have decimated the ranks of support staff, everything from night-shift lift teams (to lift heavy patients) to nurses' aides, housekeepers, break nurses and receptionists, said Johnson.

Nurses also have to strip beds, now that housekeeping staff have been reduced. "We're not above stripping beds, but it just takes us away from taking care of our patients," Johnson said.

Nurses' aides have been reduced. The hospital is placing fewer break nurses on call. And charge nurses lately are being assigned regular patients, said Johnson. The union has filed a grievance over that.

"All floors have a charge nurse," Johnson said. "The charge nurse has to know what's happening with each patient. She's the most senior, most experienced nurse, and is there to help the newer nurses. She's a resource person, the go-between for the physicians, helping them get the things they need. And in a lot of units they're also the secretary."

The nurses, who work 12 1/2 hour shifts, often end up skipping lunch and breaks because there's no one to watch their patients, said Johnson.

And the doc-on-a-stick? What don't the nurses like about that -- besides, as Johnson points out, the hospital's not clearing the new technology with the union before bringing it in? (They've filed a grievance over that, too.)

Kathryn Donahue, an RN in the critical care areas of the hospital and the CNA shop steward, said she refuses to work with it. She's been at the hospital 36 years.

"It's like a corporate doctor in a box," she said. "The doctor can't touch or feel them. It's very impersonal."

In an emailed statement, St. Joseph Hospital's chief medical officer, Dr. Matthew Miller, said the hospital is actively recruiting for another nephrologist to make up for the recent loss of local nephrologists. The telehealth technology "ensures this specialty care remains available to our patients and our community right now and into the future," he said. The hospital is using two nephrologists within the St. Joseph Health System -- one from Santa Rosa and the other from Petaluma. A third physician from Queen of the Valley Hospital will be added soon, he said.

Telehealth is quickly growing across the country, he added.

On Monday, by phone, Dr. Allen Mathew of Redwood Renal Associates in Eureka agreed telemedicine is increasingly common -- and he supports it. Far-flung, rural places like Humboldt County, where it's hard to lure specialists, need it. And it offers benefits that at first might sound counterintuitive.

Mathew is the lone nephrologist now from Grants Pass to Ukiah and Eureka to Redding. He had a partner, who left for Montana. Another nephrologist in town retired. He is trying to recruit a new nephrologist to his practice. But for now, he has 800 patients -- 100 kidney transplant patients, 100 on dialysis at two clinics (in McKinleyville and Eureka), and 600 in various stages of kidney, cardio-renal and other complex illnesses. It's not physically possible for him to also take care of the hospital's nephrology inpatients.

Yes, he said, the doc-on-a-stick might take more of the nurses' time. But some of that time, he said, might be better quality nurse-doctor-patient time than they've known in recent years.

"Once upon a time, the nurses and the physicians actually worked together to take care of patients," he said.

But, he said, nurses have increasingly been redirected from personal interaction with the physicians into doing computer tasks. The most they might interact with a doctor is on the phone. With the doc-on-a-stick, everyone can see each other and they're together in the room.

"Telemedicine brings the nurses back into clinical medicine, makes them a valuable part of the team," he said. "It's a return to old-fashioned medicine."

The key, he said, at least for chronic patients, is that the teledoctors be kept consistent -- not a random new doctor every day. For the patients' sake, it's important to have a doctor who knows their background.