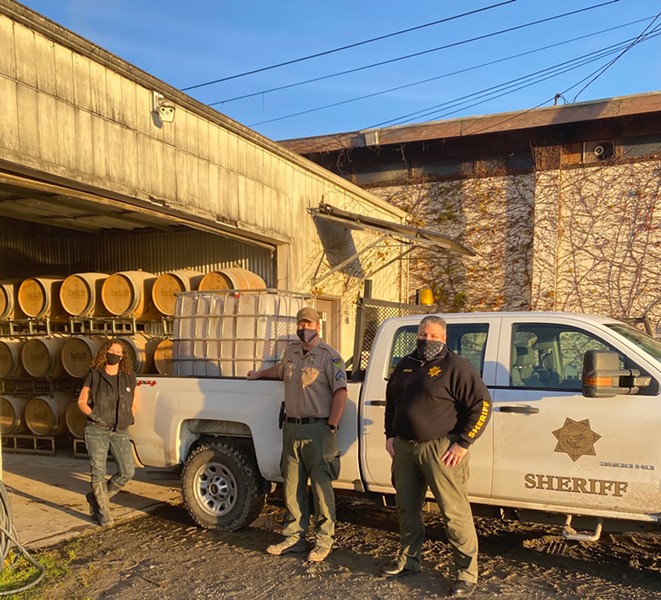 Submitted Alchemy Distillery's Amy Bohner with Ryan Craig and Jason Benge picking up a load of grain for the SWAP farm.

It is, perhaps, a failure of our collective education that when we think of whiskey, we don't immediately think of rippling fields of wheat, rye, corn or barley. Those basic grains are the building blocks of most whiskeys. Alchemy Distillery, a young whiskey company based in Arcata, uses local wheat grown at the Hindley Ranch in the Mattole Valley. The harvested wheat is heated with water to convert its complex sugars into simple sugars that will be fermented into Alchemy's Boldt Bourbon or Cereal Killer. At this point, for most distilleries, the life of the wheat or rye is over. The spent grain is often composted. But for Alchemy, the grain gets a second life, going on to feed pigs at a farm in Fortuna, one that's run by the Sheriff's Work Alternative Program.

"We started in 2015 and since the very first batch, we've donated all spent mash," says Amy Bohner, co-owner of Alchemy. "I've never had to pour it out in the field or dump it."

Bohner and her crew initially donated the mash to local farms in the Arcata area but in 2020, they formed a partnership with SWAP, in part because the program had the resources to pick up the mash as soon as it was ready, but also because Bohner appreciated SWAP's mission.

SWAP is one of several correctional work alternative programs across the state. Started in 1984, it allows low-level offenders to work in lieu of incarceration. Traditionally, participants have cut or split firewood for senior citizens, or cleaned kennels at the Humboldt County Animal Shelter, but some also have the opportunity to work at the SWAP farm in Fortuna, helping raise pigs, chickens and cows. The livestock go on to help feed people in the wider community, including folks who are incarcerated.

"About two pigs a month go to the jail," says Ryan Craig, a senior correctional deputy who helps run the SWAP program. "We sell pigs to 4-H, Future Farmers of America. They go to the fair. We also sell pigs to the public."

The number of pigs varies, Craig says, from 20 up to 150 depending on the time of year. SWAP participants do the everyday cleaning and feeding for the pigs, and other jobs such as pulling weeds and cutting firewood. It's an eight-hour day, and the sheriff's office touts the program's effectiveness in reducing overcrowding in the jail and teaching participants marketable skills.

Craig and Bohner first got in touch around Thanksgiving 2020. Now a truck emblazoned with the sheriff's seal is a regular visitor to the distillery, pulling away with a sloshing tote of the still-warm grain. Bohner says it smells yeasty, like warm bread, and the alcohol content is negligible.

"The pigs seem to like it," Craig says, adding that they mix it with store-bought grain to meet the animal's nutritional needs.

Meghan Mott, a veterinarian with the California Department of Food and Agriculture who provides oversight of the SWAP farm's stock, says the donations are in line with best practices for animal nutrition, providing a "high protein, high fiber feed source."

"Distillers like Amy Bohner must dispose of their spent grains and the animals at the Humboldt County Sheriff's Farm are more than happy to help out," she wrote in an email to the Journal, adding the main risk to the animals is overconsumption. "[Brewer's spent grain] is highly palatable to most livestock, but excess consumption can lead to digestive problems. Farmers must be careful to limit access to this rich, delicious supplement, so generally it is used as a 'top-dress' to the animal's normal ration."

Bohner and her crew, whose dedication to reuse and zero-waste practices has extended to creating a whiskey from day-old Los Bagels bagels, say they plan to continue with the program. Since 2015, they've donated 49,390 gallons of spent grain back to local critters.

Linda Stansberry (she/her) is a freelance writer and journalist who lives in Eureka. You can find her work at www.lindastansberry.com.