County Code Enforcement is understaffed and falling further behind 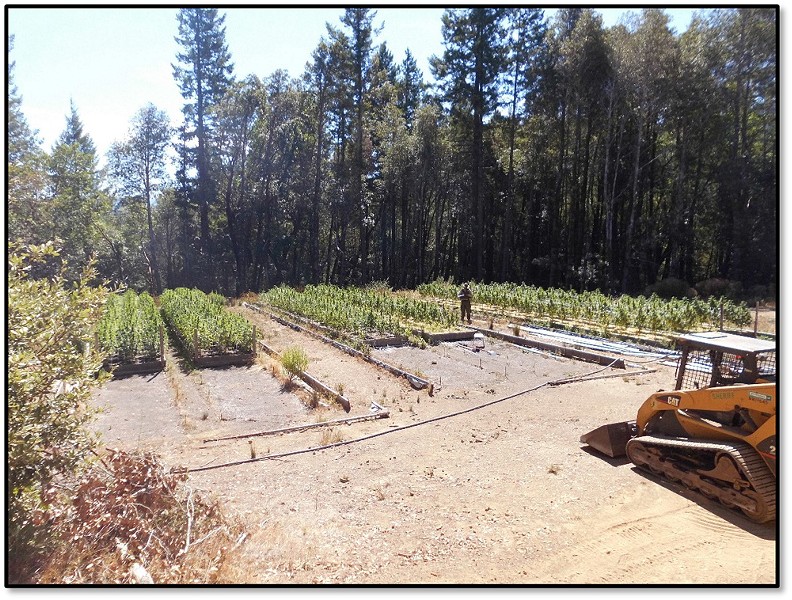 If Humboldt County departments were backyards, the Code Enforcement Unit would have so much trash piled up that concerned neighbors would call the ... well, you get the picture. At a recent presentation given to the board of supervisors, the department offered an alarming picture of just how dysfunctional it has become. Code Enforcement Unit Manager Karen Meynall presented an articulate but dismal report on the unequal balance of needs to the department's staffing level, which sits at 11 people. Of these, five are code compliance officers and three are investigators. The remainder are administrative staff.

"The traditional team [the officers who deal with non-cannabis related complaints] currently has nearly 700 cases that are open with approximately 450 still unassigned to staff," Meynall said. "A full-time workload consists of approximately 40 cases. The two most seasoned staff members each have over 75 cases assigned to them while the two staff members hired in November and December 2020 have about 35 cases each. There is clearly more work than the current staff can address and there continues to be more cases opened each month than closed."

Meynall explained that even the simplest of complaints can lead to a long legal process involving warrants, fines, inspections, contracts and sometimes placing a lien on the offending property. All of this can take months — or years — to process. Occasionally, she said, a letter written by the department to an offender is enough to get them to change their ways, because they don't want to have to deal with the authorities. However, others are uncooperative.

"Without consent of the property owner CEU staff is forced to obtain inspection warrants for each and every site visit," she said. "This process alone takes the better part of a week to submit to the courts, receive authorization and post notice at the property."

Once the CEU staff verifies a complaint is valid, they attempt to work out an agreement with the property owner to clean up the site, specifying what corrections are needed and when they will be completed.

"Many property owners are successful in completing abatement within the specified time frames, but just as many fail, and the compliance agreement is breached," Meynall said. "At this point, several months may have gone by with little improvement to the property, not because CEU staff is not actively working the case but due to the property owner failing to perform their obligations."

She showed several pictures of mounds of trash, junked vehicles and appliances, mounds of tires and assorted garbage.

Even if the owner cooperates, the job does not end when the property is clean. The county must then try to collect its abatement costs and civil penalties, which in extreme cases can run into millions of dollars. Usually this ends up in the courts, which are not known for their rapid decision-making.

One illegal junkyard on the banks of the Van Duzen River sported more than 400 junked vehicles, many parts and scrap metal, hundreds of tires, more than 200 appliances, including refrigerators, washers and dryers, and 19 containers of oil and other hazardous waste.

Although the owner attempted to cooperate, the job of cleaning up 30 years of accumulated trash proved too difficult, and the county ultimately hired a private company to do the work. More than 53 truckloads were required to haul it all away.

Even more alarming at the site was the discovery of buried drums containing unknown substances. The area around the drums has been secured according to standards of the Department of Environmental Health.

"A second phase of the cleanup is still required to remediate contaminated soils, address the buried drums and remove additional junk vehicles and debris located in the embankment of the Van Duzen River and along the riverbed," Meynall said.

The other half of the Code Enforcement Unit, called the Humboldt Environmental Impact Reduction, or HEIR team, deals with illegal cannabis operations, often in cooperation with the Sheriff's Department and the California Department of Fish and Wildlife.

Much of HEIR's information initially comes from aerial surveillance. Those landowners who attract the county's attention are served with both a notice of abatement and a notice of violation for not following the terms of the Commercial Cannabis Land Use Ordinance. Meynall noted that illegal cultivation is often associated with improper storage of hazardous materials, solid waste, grading and construction without permits, unapproved sewage disposal systems and development within a streamside management area. Penalties run up to $10,000 per violation per day.

If the owner cooperates with the county, they are given 10 days to straighten up in exchange for receiving only a single day of administrative penalties.

In 2020, the HEIR team served 103 cannabis violation notices, many in collaboration with law enforcement agencies. Only a small percentage are working with the county or have successfully met the county's conditions.

Supervisors had numerous comments about the presentation, as did members of the public. Second District Supervisor Michelle Bushnell questioned the use of aerial surveillance data. Meynall replied that it was used to "triage" complaints, and to examine sites that were "already in the queue."

Fifth District Steve Madrone observed that the unit needed more staffing, and wondered if there was a way to help owners bring their property up to code — with the understanding they would be responsible for paying all the accrued costs if they backslid in the future.

First District Supervisor Rex Bohn discussed the issue of people who gave up altogether on compliance and just walked away from their properties.

Fourth District Supervisor Virginia Bass wondered about people who reported minor but annoying nuisances in their neighborhoods — would their concerns be triaged out of existence?

One member of the public complained that the solutions offered by the Code Enforcement Unit — millions of dollars in penalties and taking people's properties away — did not make sense, and only resulted in making people homeless. She added that she had received a notice of violation but did not receive adequate follow-up and was concerned about moving the issue forward.

"This is impossible and unfair," she said.

"We're all suffering," one woman said. "We've tried to work with you. It's not working. I hope you guys can fix it. We need some help. Please."

Planning Director John Ford, whose department includes the Code Enforcement Unit, concluded that nobody was happy with the situation, especially the time frames involved.

"For the person that's being enforced against, it happens too fast," he said. "For the people who are complaining, it takes way too long."

The board did not take any action, other than to accept the report.