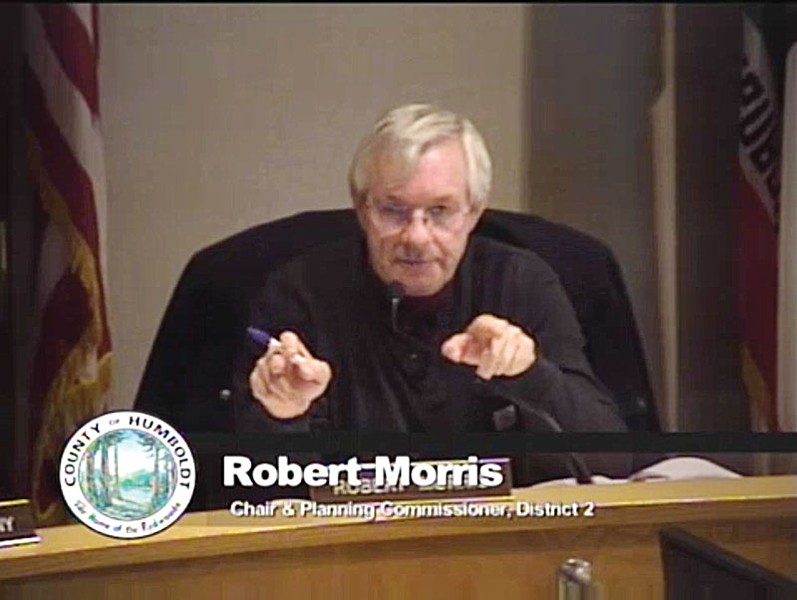 Since the beginning of January, the board of supervisors has been working diligently to cobble together a medical marijuana land use ordinance from a slew of parts: a year-long private drafting process, multiple planning staff drafts, dozens of hours of public comment, and a month-long planning commission review.

As the supervisors narrowed in (they were finalizing language as the Journal went to press, and will bring the ordinance back for a final reading Jan. 26) they largely followed the planning staff's guidance, adhering to relatively strict canopy sizes, disallowing new grows in timber production zones, and sticking to regulations they hope will avoid litigation from environmental groups. This was a different direction from the more grower-friendly regulations the planning commission had sought with its ordinance recommendations.

The supervisors' limits on grows, as the Journal has reported, are a strategy to align the ordinance with its associated mitigated negative declaration, a document that removes the burden of conducting a lengthy environmental review. The mitigated negative declaration was based on that of the state water board's environmental program from last year, and, after the planning commission finished its review of the ordinance, planning staff warned that the commission's changes would allow a scale of cultivation beyond what the water board accounted for and negate the declaration. Environmental groups all but threatened to sue, which would've sunk the effort to enact the ordinance by March 1.

The supervisors' general concurrence with the staff is sure to be rankling the planning commission, which, at its Jan. 7 meeting — the first since staff consolidated the commission's 10-meeting endurance run — expressed outrage at the staff report forwarded on to the supervisors.

Though the move would have had "no binding force or effect," in the words of Commissioner Lee Ulansey, he and Chair Robert Morris tried really, really, really hard to raise their hands and say they had no confidence in the county's planning and building department. This, despite the fact that the subject appeared nowhere on the Jan. 7 meeting's agenda.

Jump to the 2 hour 8 minute mark to see the commission's discussion.


At the end of the meeting, Morris raised concerns over the staff report, saying the topic of the draft's adherence to the mitigated negative declaration was brought up multiple times during the commission review.

Commissioner Ben Shepherd said he was disappointed to read in the staff report that the commission's direction on timber production zones was determined by staff to be out of line with the general plan. He would've liked to know that before it was submitted to the supervisors, he said.

Ulansey gave more vague complaints — which he chalked up to "deliberate bias" on the part of planning staff — accusing them of "misrepresenting and not completely representing public testimony at public meetings, not following through on our votes."

When staff first introduced the draft ordinance in October, supervisors Ryan Sundberg and Estelle Fennell, who'd served on the medical marijuana focus group, expressed surprise and disappointment, saying it drifted away from an ordinance prepared by local political action committee California Cannabis Voice Humboldt. At the Jan. 7 meeting, Ulansey suggested that the planning commission, in its review, was just trying to make the supervisors happy by making it look more like the private group's draft. "[The board] made it pretty clear that wasn't the direction they want to go and I think we all heard that direction and tried to pursue it," he said.

Whether the commission's role is to please the supervisors or review draft legislation for legality and adherence with the county's general plan and other codes is up for debate. Planning commissions are often used to solicit community and statutory input, according to Pepperdine University professor of public policy Michael Shires, who said it's not unreasonable for a planning commission to submit concerns about a draft ordinance to the supervisors.

While some supervisors expressed dissatisfaction to the media when the draft was released, instructions to the planning commission didn't suggest any specific direction when reviewing the ordinance. According to the minutes of the Oct. 13 supervisors meeting, "a motion was made to direct Planning staff to present the Planning Commission with a chart showing a range of alternatives for their consideration and to clarify their latitude to modify provisions of the draft ordinance as presented."

Commissioners Kevin McKenny and Alan Bongio also expressed disappointment in the draft submitted to supervisors, but the board has mostly been in agreement over even the more controversial points since they've been reviewing it. Sundberg, apparently the last holdout over the prohibition of new grows on timber production zones, acquiesced during the supervisors' Jan. 12 meeting, and the board voted unanimously to include the restriction.

But the planning commission's weirdness continued. Morris pointed with both hands at empty chairs where planning staff had sat during the commission hearings on the ordinance and asked, "Does the commission still have confidence, in the staff that sit at those tables and gave us their advice during the 10 meetings we had? Because I certainly have a big problem with trust and I think, to a certain extent, it's almost a breach of the public trust."

This prompted Shepherd to weigh in, saying he was uncomfortable taking any kind of vote on an item that wasn't on the agenda, citing the author of California's public meeting law. "I think we're kind of trouncing all over Ralph M. Brown here," he said, adding later that he thought the planning staff in question deserved to be present to respond to the commission's allegations.

County Counsel Jeffrey S. Blanck agreed, mostly. "Voting and all that nature should be on an item that the public would be able to come in and see and hear what you have to say, and know that you're going to talk about it," Blanck said, adding that another commissioner's suggestion to put the item on a future agenda wasn't "trying to muzzle the commissioners in any way."

But Morris and Ulansey — despite their own previous championship of transparency laws which mushroomed into a lengthy and costly lawsuit with the county — persisted.

"I did not hear the counselor say that we were in violation of the Ralph M. Brown act," Morris said.

"My recommendation," Blanck reiterated, "because it appears you're all interested, is to put it on [a future agenda]. That's the safest way to go."

"But unfortunately," Blanck responded, "the Brown Act puts a label on you that when you're here together, acting in concert, it's required to be noticed to the public. It can be housekeeping, it can be whatever. The topic isn't really the concern of the Brown Act."

Ulansey suggested that the hands-raising was simply a straw-vote — routine for the commission to gauge support — but commissioner Noah Levy also expressed concern, saying he wasn't aware of the commission ever taking a straw vote on an item that wasn't on the agenda.

Eventually, Morris gave in. "The purpose for my question for the raise of hands was to figure out if it was a significant issue to agendize," he said. The commissioners seemed to agree that, after 30 minutes of conversation about the issue, yes, it was worth discussing.

But even that may prove contentious. Morris seemed unsure how to direct staff. "We will have this as a discussion — as an action item — a discussion item I guess it should be ..."

"I think it's action," Ulansey interjected.

"As an item on the agenda," Morris continued. It appears on the Jan. 21 agenda as a discussion item, meaning the commission can't take a formal vote of no confidence.

Meanwhile, Rob Wall, the county's recently appointed interim planning director, said he's taking the commission's allegations seriously. At the meeting he told them, "That kind of accusation definitely raises my blood pressure. ... Certainly my first planning commission meeting getting a vote of no confidence on some of my key staff members isn't probably the best way to go."

Reached by phone later, Wall said that "the planning commission obviously does not have the authority to govern personnel matters — that is my job."

He said he's been looking into the commissioners' allegations, focusing on the staff's determination after the hearings that the commissioners' recommendations would exceed the mitigated negative declaration. "With regard to not following instructions, I'm doing what everybody else who has some interest in this process is doing: reviewing the votes and the documentation. We'll have that discussion, with the findings, on the 21st."

He added that none of the commissioners have reached out to him about specific directions that his staff ignored, though he welcomed that sort of input. But he indicated he supported the staff report. "We have an obligation to the board — as do our legal staff — to let them know what we professionally find legally defensible."

The issue appears to be a continuation of disputes between property rights advocates and Humboldt County that's been simmering for years. Morris and Ulansey formed the Humboldt Coalition for Property Rights, which famously fought against former Planning Director Kirk Girard's department before he left in 2012. Bongio, who owns a construction company, seemed to reference that fight at the Jan. 7 meeting. "I believe what we saw through this process was, unfortunately, what we saw for many years not too many years ago," he told Wall. "I would hope, especially with new leadership, that you'd make it clear to your staff members that it's their job to do their job and not their agenda."

Shires, the public policy professor, said the staff's role, as employees of the public, is to help the commission make correct planning decisions. "Typically, they are some of the planning commission's greatest supporters," he said. The commission, in turn, is entrusted (by their appointing supervisors) with decision-making on planning matters — though any commission decision is appealable to the board of supervisors.

Whether staff acted out of line depends on what changes were made, why and how the planning commission's charter defines its role, Shires said. (The Journal was unable to review the charter by press deadline.)

Short deadlines, longstanding disputes and frustrations on both sides appear to have created an unusual situation. Shires said it's uncommon for there to be rancor between a planning commission and planning staff.

"The idea of taking a no-confidence vote in staff — I've never heard of that" he said.