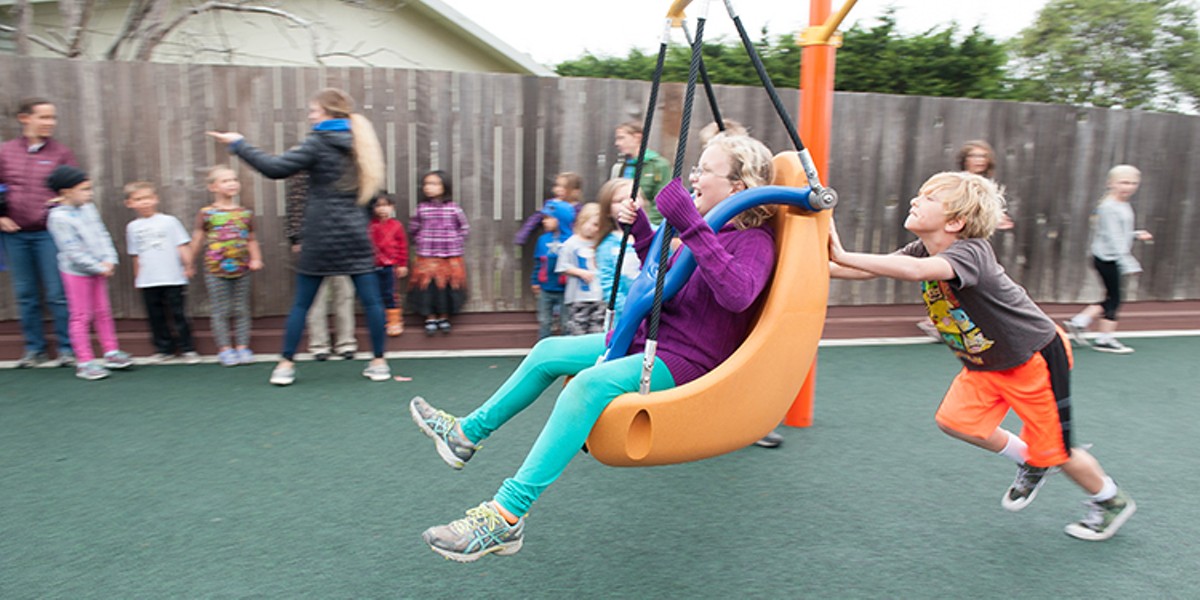 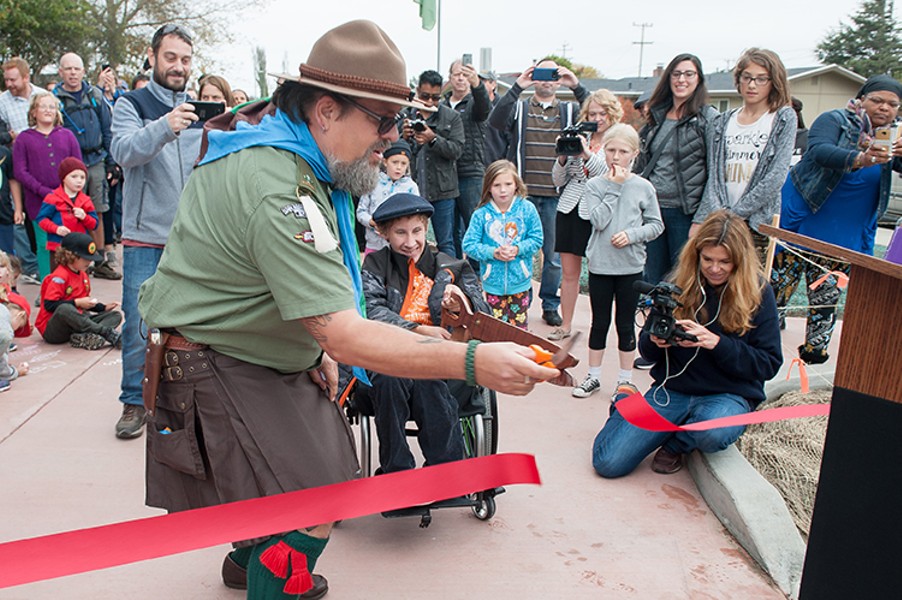 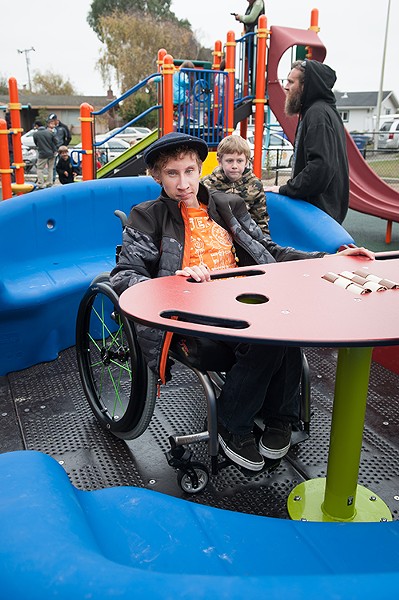 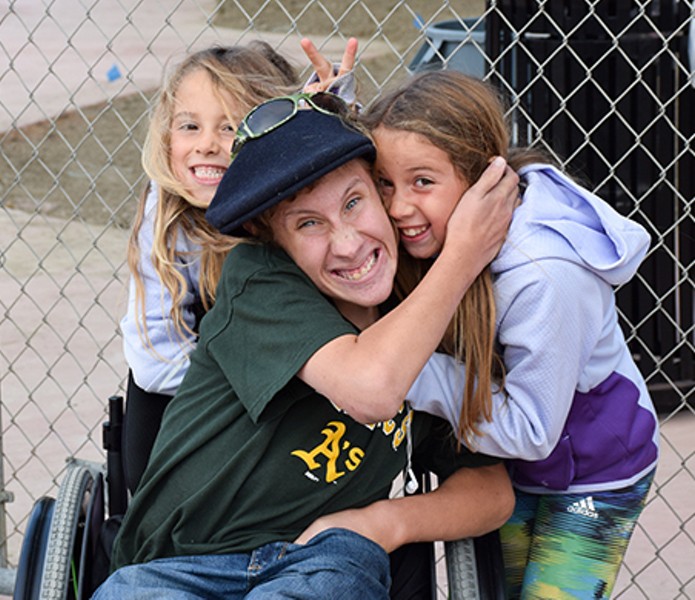 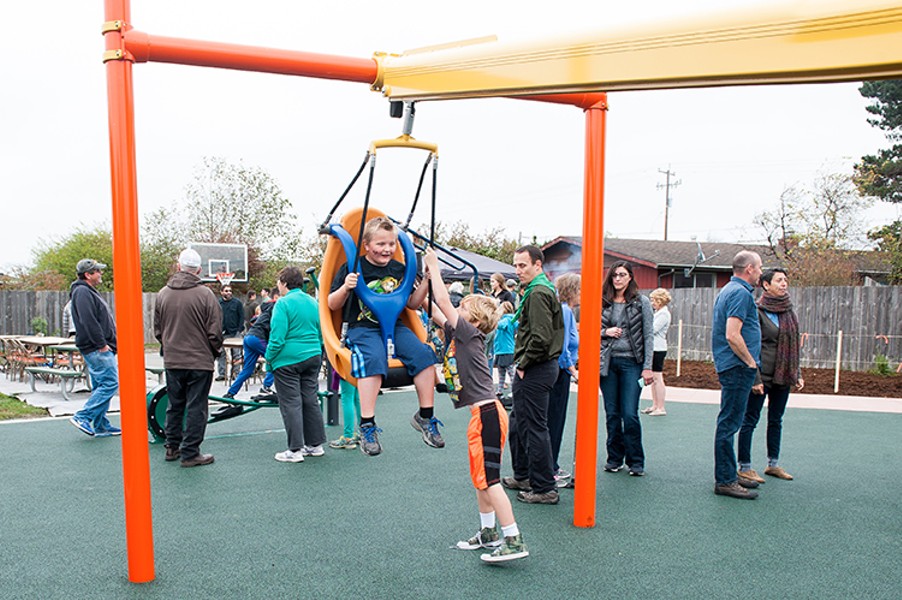 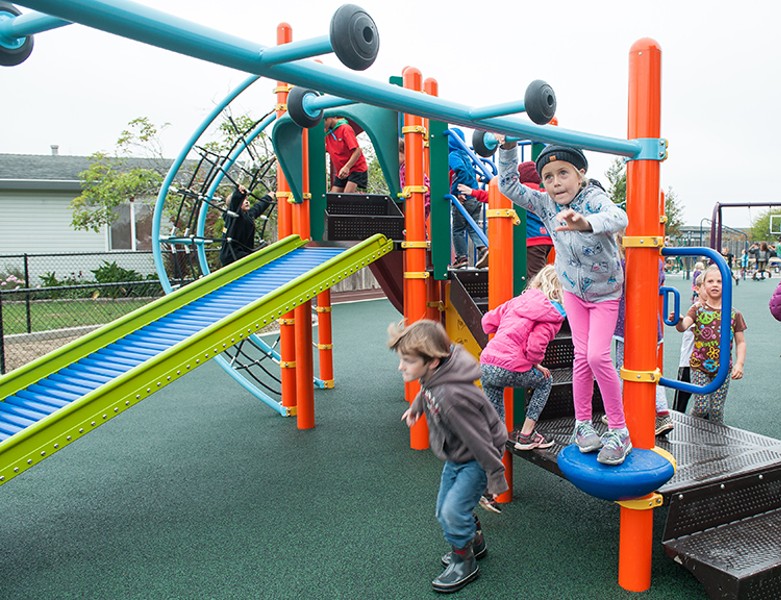 Photo by Mark McKenna Madison Lehto plays on the bars at the park. 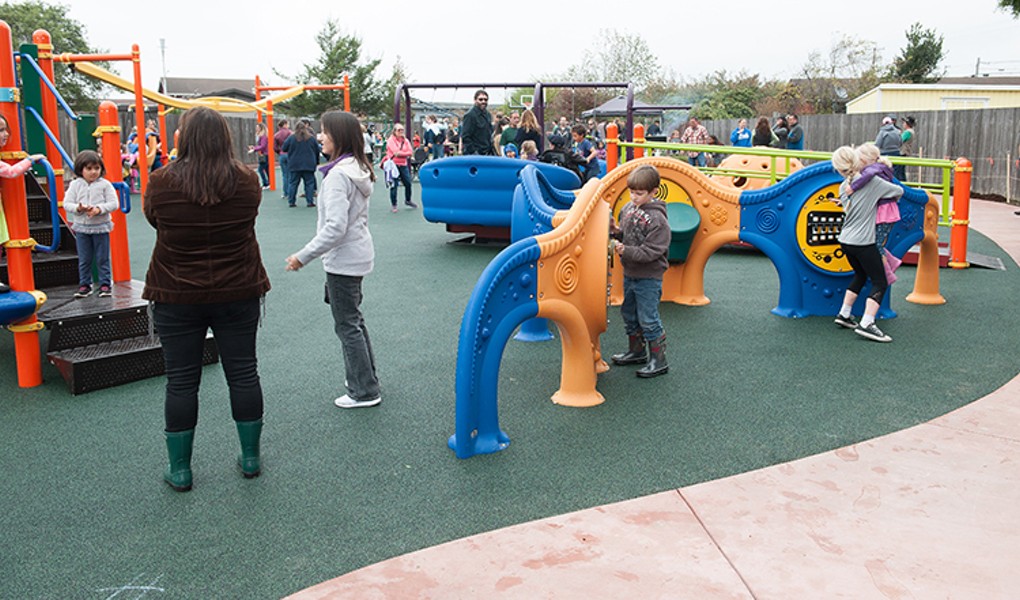 Photo by Mark McKenna Around 200 people turned out for the Greenview Playground opening in Arcata.

When Ernesto Cappuccio arrived in Arcata with his family just over four years ago, a lot about his life changed. There were all the usual things that such a move entails for a fifth grader, which in this case included starting over at a new school in a small town where everyone seemed to have known each other forever.

But that wasn't the hardest part. It turned out that a seemingly simple thing proved to be one of the toughest adjustments — he could no longer play basketball.

Born with spina bifida, Ernesto uses a wheelchair. Back when he lived in the Bay Area enclave of Livermore, the now 15-year-old was part of a competitive basketball team that had access to a court with an adjustable hoop. But here in Humboldt County, there were no similar programs.

And while there was a park with a court just down the street from his new house in Arcata's Greenview neighborhood, the lone basket stood at regulation height and Ernesto was blocked from using it by a swath of grass that was difficult, if not impossible, for his wheelchair to traverse.

When his two younger sisters — Chloe and Zoe — played on the swings or climbed the jungle gym, Ernesto was often relegated to the sidelines, or — more accurately — the sidewalk.

And considering that he not only played competitive basketball and sled hockey, but also went caving and rock climbing through the nonprofit Bay Area Outreach and Recreation Program, Ernesto was not accustomed to sitting things out.

Now an Arcata High School freshman, he's on the track and field team in discus and shot put, while also playing trumpet in the orchestra.

"It was tough," Ernesto says of the move. "I liked to do all of those sports. They were fun."

So, when neighbor Daniel Bixler organized a meeting in the spring of 2015 to look at replacing Greenview Park's outdated equipment, Ernesto and his father Frank went to talk about more than just what play structures should be installed.

They went to talk about access for everyone. And they were not alone.

Bixler says he still becomes emotional when thinking about the families who came forward in those early planning stages to explain how playgrounds are often symbols of isolation to their children.

Instead of welcoming places to shoot a few hoops or zoom down slides with abandon, the combination of a lack of access and equipment they could use made the parks seem more like exclusive clubs that didn't include them on the guest list.

The father of two young daughters, Bixler says he couldn't believe he'd missed what should have been so obvious.

"It was more than a lightbulb that went off," he says, recalling he immediately turned to Dan Diemer, then the city's parks superintendent, and asked, "What would it take?"

What it was going to take was money, about twice as much as a traditional playground build, not just for the specialized play equipment but also to install wheelchair-friendly surfaces and things like accessible picnic tables.

With his eyes now opened wide, the owner of Humboldt Hot Sauce knew there was only one way forward and the stage was set for Arcata's first fully inclusive playground. Then the hard work began.

"There was no turning back," Bixler recalls.

Playgrounds haven't always been the neighborhood fixtures that most people now take for granted. The idea first appeared around the mid-1800s, in the wake of the Industrial Revolution, to offer children a safe place to play and respite from the bleak tenement life so many faced in inner cities.

With the baby boom following World War II and the rise of suburban neighborhoods, playgrounds became more common place and have continued to evolve over the years, embraced not only for providing needed green space amid urban sprawl but also as an outlet for unfettered play that helps children learn to interact and use their imaginations.

But there's also a more serious side — psst, don't tell the kids — especially for children with developmental delays.

All that playing builds physical coordination, which in turn helps kids who have trouble navigating the complicated dance of social interaction to develop those skills, according to Jayne McGuire, a professor of recreation administration at Humboldt State University.

Children who might have a tough time communicating can find themselves on more even ground with their peers when they can go head-to-head on the monkey bars just like everyone else, she says.

As an added benefit, those skills can develop faster on playgrounds than with rote exercises because the kids are simply having fun, McGuire notes.

"They're little microcosms of social engagement that develop a sense of self and a sense of independence," says McGuire, who consulted on Greenview Park's design. "It lets parents take that one step back and let their kids be kids."

Along that vein, inclusive playgrounds are gaining a foothold following the passage of the Americans With Disabilities Act and special education laws in the 1990s.

McGuire notes that inclusive playgrounds are not just for children who might have difficulties using traditional play structures. They ensure there is something for everyone to enjoy — and to enjoy together.

"The goal is that everyone plays side-by-side and we break down those barriers," she says.

While it's hard to quantify how many now exist, National Public Radio's "Playgrounds for Everyone" app — which crowdsources locations and information on the growing movement — lists nearly 3,000 inclusive playgrounds in the United States.

For Mara Kaplan, founder of Let Kids Play, a Pittsburgh-based national consulting firm on inclusive play areas, the importance of making sure all children and adults have access to playgrounds can't be overstated.

The mother of a special needs son, Kaplan knows first-hand the heartbreak of not being able to do what so many people take for granted — spending a day at the park with her children.

"It really isolates a family and takes them out of the community when you don't make the community inclusive and welcoming for everybody," she says.

While there are ADA requirements for newer parks, both Kaplan and McGuire say those are "low bars" that mainly address access.

But things have changed by leaps and bounds in the 24 years since her son was born, with many communities, like Arcata, embracing the idea that making inclusive playgrounds can be the rule, rather than the exception, to the benefit of everyone.

"You see children learn about one another in a way that no other place else than a playground can be," Kaplan says. "A playground is normalizing."

While Arcata might not have been on the forefront of fully inclusive playgrounds, the city is now moving toward leading the nation by making Greenview Park just the starting point.

"We hope it will be the first of what will be many," says Julie Neander, the city's director of Community Services. "That is our goal. ... It means it will cost us more money but it's so worth it. We want our parks to be for everyone."

This past Saturday marked a major milestone when, after more than two years of planning, fundraising and hard work, Greenview Park officially opened to a crowd of about 200 who gathered at the one-acre site tucked into a cul-de-sac off 11th Street.

If it takes a village to raise a child, it also took one to reinvent Greenview Park.

Between the spare change dropped into collection cans, $200,000 in state funds granted to Arcata because of its commitment to affordable housing and the donations of community members and local businesses, more than $300,000 was raised.

"Our world is better by our actions," Bixler told the crowd in a voice choked with emotion.

As children scrambled across the spongey green and black speckled matting that replaced the grass to explore their new space, grownups wandered about the vibrant yellow, orange and blue play structures, where once only meager swing sets and a lone steel jungle gym the color of a dreary Humboldt day stood.

There are still swings, but this set includes one with a specialized seat to strap in children who might not have the ability to hold on for themselves. Near the entrance, a sensory wall with patterns to trace and music makers to play stands at the ready, along with the obligatory climbing structure and side-by-side slides.

Toward the back and off to the side, sits a dome that can be scaled while also providing a quiet refuge inside for autistic children who can become overwhelmed by sensory overload.

There is also a sway glider with a ramp to accommodate wheelchairs that rocks back and forth.

None went unused. Still in the back but with a paved path leading the way, there is a basketball court with an adjustable hoop.

By far the most popular feature on Saturday was a zip line structure with a large chair resembling a child's car seat that zooms back and forth along a track on the park's outer edge, the idea of Zoe Cappuccio — Ernesto's 8-year-old sister.

Standing at the head of a long line waiting to take a turn, her sister Chloe could not be happier with result.

The pair — like the rest of the family — took part in the park's fundraising, with the girls setting up a lemonade stand that raised $60 for the cause.

"I think it's fun," Chloe says of the zip line. "It feels like you're flying."

What started out as a simple renovation project had transformed into something much more — a place with something for everyone, where children and adults, regardless of whether they are blind or deaf, autistic or use a wheelchair, can mingle and play — together.

Calling Greenview Park "a great example of collaboration," Bixler notes his tiny Arcata neighborhood now boasts the only fully inclusive playground in the 350-mile stretch between Oakland and Medford, Oregon.

After Ernesto cut the opening day ribbon, Bixler was there to give him a high five.

As the celebration in the park continued, Lucy Bixler stopped by the sign with glass blocks denoting the 66 donors who gave more than $250 toward the effort — proudly pointing out the block with her and her sister Bella's names.

Her father says that, years from now, his girls and other children will still be able to look up at those names and know there were people who cared enough about them and their community to make a difference.

"I think it's going to work out very well for everyone," Bixler says.