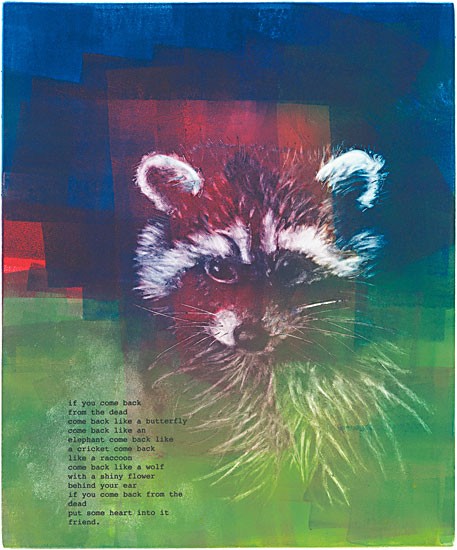 It began with the notion of auctioning off a poem. A friend had asked poet/filmmaker Anthony Lucero if he might contribute one of his poems for a benefit auction she was putting together.

"I told her you can't really do that," said Lucero over lunch at his Arcata bungalow. He figured that only works by a dead poet would sell at auction. "And I wanted to be alive," he said with a laugh.

Instead he decided to find a collaborator, an artist who could create some sort of piece to accompany his words and create something akin to a broadside. He found one in Carol Andersen, an Arcata painter probably best known for her whimsical paintings of animals. Dancing foxes and birds that seem to smile at you leap from the large sheets of paper she works on, suggesting illustrations for some unknown story.

Lucero gave her a couple of short poems. One touched on bees; the other was a three-line epigram:

fairy on the back

"I ran over to my studio and I only had a little while to paint," Andersen recalled. "I'm usually so meticulous, but those [two pieces] just came right out of me. And people loved them."

The bee piece was decorated simply, with life-sized images of bees. A quizzical black crow spills off the page as he eyes the crow/angel poem.

As the artist noted, both pieces were well received at the auction. Bidding was brisk, somewhat to the dismay of Andersen who'd decided she liked the crow piece so much, she bid on it herself. "But after it went to over $100, I figured I'd just paint another one for myself."

With their first collaboration a proven success, Andersen and Lucero decided they'd continue. New poems inspired new paintings and vice versa. "Sitting alone working as a writer in your room, basically the only mirror you have is a faraway editor," said Lucero. "Working directly with an artist and seeing them interpret your work is just amazing. I ended up writing so many more poems once the process began."

Andersen echoed his thoughts: "What I'm finding is, taking a poem and working from it, I come up with so many ideas I can hardly contain myself," she said.

The project took on new life when Andersen discussed it with Sue Natzler, curator/owner of Piante Gallery in Old Town. Might she be interested in a show?

"She said yes and gave us two rooms," said Andersen.

More energy was injected into the collaboration as the circle of poets and painters expanded. "It's not as much fun doing a solo show because of the pressure," said Andersen. "This is so much fun."

Natzler suggested inviting Karuk painter/sculptor/poet Brian Tripp, who often integrates text in his work. Andersen contacted the poet Jerry Martien. "He gave us this beautiful poem and told me about the imagery he was thinking about when he was writing it."

She also enlisted a couple of her neighbors from StewArt Studios in Arcata: Patricia Sennott, who has been focusing on monotypes of late, and Libby George, who works in pastels -- and also writes poetry.

"We encouraged the artists to reach out to poets they know," said Andersen, and the circle expanded further as George asked Jim Dodge if he might have a poem to contribute.

Meanwhile Lucero contacted the wild young painter Gus Clark from Eureka and reached out via e-mail to some European photographers whose work he admired.

Each collaboration was unique. As Andersen put it, "The thing I like best is everybody created something utterly different."

Sennott created a monotype of a raccoon to illustrate a poem by Lucero about reincarnation that makes direct reference to a raccoon. George juxtaposed a pair of mirrored figures with a poem by Dodge, leaving it to the viewer/reader to make a connection. Lucero paired a mystical poem touching on angels with a haunting image by Romanian photographer Razvan Pleteriu showing a Gypsy boy blowing smoke. Andersen continued working from Lucero's words, but also collaborated with her writer daughter, Rose.

The oil painter Clark experimented with digital manipulation working with a handful of Lucero's poems and some images drawn from the European photographers. "[Gus] mixed it with some of his own imagery and sometimes my text to create these sort of layered collages," said Lucero. "The end result would be that you rarely see the poem itself, but he said he'd let it guide where he went and let it speak from beneath the layers. I don't know if that's true, but I like the pieces and I like Gus and that's good enough for me."

When I spoke with the "Picture Poems" instigators last week they were not totally sure what shape the gallery show might take in the end. Andersen still had over a dozen pieces on the verge of completion, and they were still assembling dozens of pieces from various contributors. They would leave it to Natzler to winnow the collection.

"What's great about Piante is Sue always takes your work and makes a cohesive show," said Andersen. "She has a vision, and I know she'll make it all work together."

An opening reception for the artists and poets will be held Saturday, Oct. 3, from 6-9 p.m. as part of Arts Alive! Piante Gallery is open Wednesdays through Saturdays from 11 a.m. until 5 p.m. at 620 Second St. in Eureka. The show runs through Oct. 31.