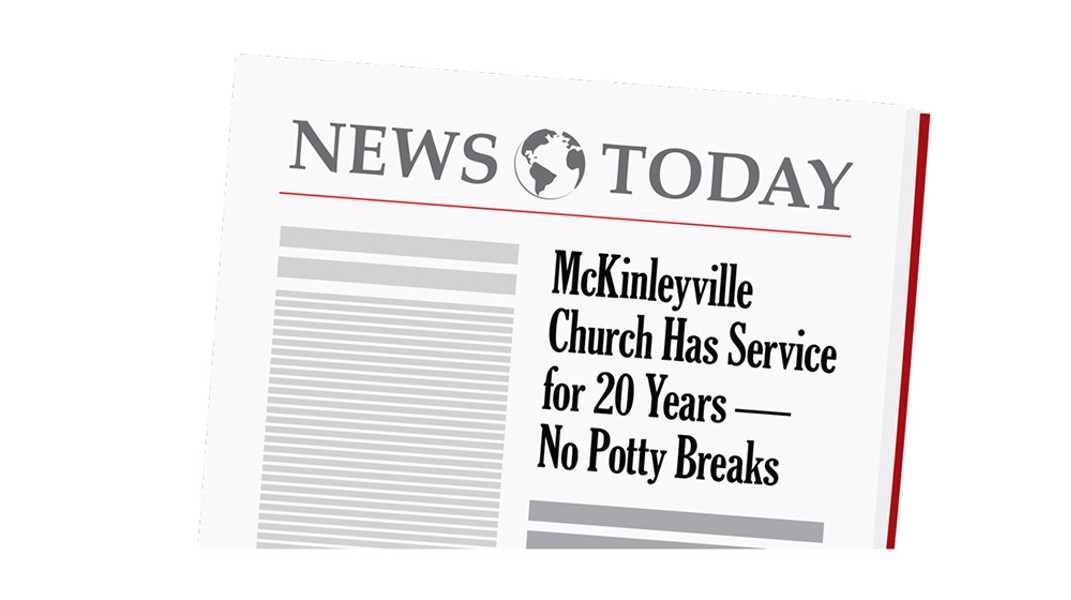 "Good satire goes beyond the specific point it's trying to make and teaches you how to think critically. Even after your favorite cartoonist retires or [Stephen] Colbert wraps it up, you're not left believing everything they're telling you."

— Aaron McGruder, creator of The Boondocks

The Humboldt State University journalism major grew up watching news every day. She hated it.

"It was almost like the witching hour," says Mikayla Moore-Bastide, who transferred to HSU from San Diego's Southwest Community College. "Nothing but death, murder, theft, burglary. Just bad news all over."

Moore-Bastide discovered parody news in high school. She loved it.

"The news is becoming more ridiculous every day," she says. "When the world is falling apart, sometimes you just need to laugh."

This semester, Moore-Bastide enrolled in a class I offer every couple years called "News Parody: Theory and Practice." I warn students it will be one of the hardest classes they'll take in college. It sounds like kick-back slacker stuff. But immersing yourself in news and learning how to write comedy is a tough combination.

At its best, parody news uses satire to explore absurdities and contradictions in the news. It also exposes the wacky practices of media institutions. Scholar Rachel Sotos refers to parody news as the "fifth estate," the watchdog of the watchdog press (the "Fourth Estate").

With that in mind, my students read local publications more than most college students. They scan Humboldt news for stories with parody potential.

"McKinleyville Church Has Service for 20 Years — No Potty Breaks."

"Is Your Heart Still Beating? Come to Eureka to Find Your New 'Silver Fox.'"

Our class goal is to resurrect The Dumberjack (www.dumberjack.wordpress.com), invented by HSU students who graduated and went off to work for alt weeklies. The name's a twist on HSU's student newspaper. "The Lumberjack, but dumber," reads a house ad from the one-off print publication in 2016.

My journalism colleagues fear my class promotes fake newsery. I get that. One professor emailed me, as cautionary tale, Nieman Lab's: "Maybe You Know The Article's Satire but a lot of People Can't Tell the Difference." Nieman researchers spent several months surveying readers about the believability of various fake news bits. Some came from satire sites.

"Many people seemed to believe them," the article states, proposing labels for parody news.

I'm on board with labels. All iterations of Dumberjack — print, website and social media — include tags like "Fake HSU news," "Fake Arcata news" or "Assorted lunacies." It's important to ensure the audience knows my parody students' work is total bullshit. Unlike everything else they read or watch in the news.

Are some subjects off limits for parody?

We debate this after watching Last Week Tonight with John Oliver's "Bias in Medicine." Oliver delivers heartbreaking interviews and well-researched facts. A cancer institute studied effects of diet on estrogen levels and uterine cancer — but all the subjects were male.

"They studied a way to prevent cancer of the uterus on people who didn't have one!" observes Oliver, likening this to studying the benefits of conflict resolution by watching Real Housewives of New York.

My students laugh, cringe, learn. Several agree the topic seems too meaningful to mix with comedy. But. They would not have encountered this information elsewhere. Nor would their peers. They aren't searching for documentaries on racial and gender bias in the health care system.

"People will watch John Oliver because it's John Oliver," one student says.

Or Trevor Noah. Or Jimmy Kimmel. Or Samantha Bee.

Students dive into our weird social experiments with intelligence and passion.

In late September, we dressed as various Humboldtian stereotypes and walked the campus — like wannabe satirist Sasha Baron Cohen in Who Is America? Students performed as a Prius-driving HSU professor with dreadlocks, a gun-toting wildlife major, a hula-hooping astrologist and a native Humboldt kid from a grower family, whose chores include trimming and selling weed.

Performing as the latter, HSU journalism student Carlos Holguin dressed in Carhartt overalls, carrying kombucha and a notebook. In video clips I've seen so far, Holguin asks students if they've seen his mom, who owes him his $5 allowance, or his teacher, who owes him for two bags of weed. Students are curious and helpful. One directs him to Siemens Hall on campus, home to the HSU president's office.

"Parody opens the door to the echo chamber and allows us to hear new voices and see new perspectives that we otherwise may have ignored," Holguin writes in a "why parody" essay. "By poking holes at the daily occurrences in our mundane lives, or taking pot shots at the worldly events that grace the news, we can start discussions."

Deidre Pike is an associate professor at Humboldt State University. She prefers she/her pronouns and earned her doctoral degree by writing about South Park and Bambi. She came to Humboldt from the University of Hawai'i at Manoa because she prefers the weather on the North Coast.