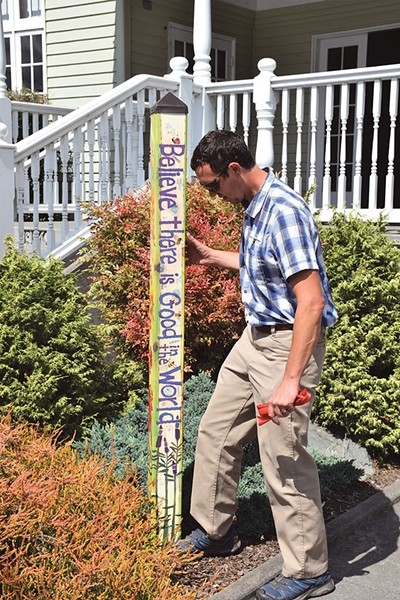 Thad Greenson The new artists pole in front of the Monday Club.

Fortuna City Councilmember Dean Glaser wanted to be very clear that he didn't intend to sit passively by and watch the Arcatafication of his city.

"There's two people in the audience. There's 14,000 people in this city," Glaser declared at the council's Aug. 18 meeting. "Where is the support for this monumental idea to put something in our city that makes a statement, just as the statement of any single liberal city, whether it be in California or the other 50 states, that expresses pacifism, liberalism, the conquest of the ideals that a community or a city has? I consider Fortuna to be a very conservative city. ... I don't think something like this should be on any city property. I don't need to be driving down Main Street and seeing it in front of the Monday Club. It's going to tick me off. I don't like this kind of political statement."

So just what was the focus of Glaser's ire — in his words, the physical political expression of "pacifism" and "liberalism" that was going to conquer the very ideals of the Friendly City? A 6-foot-tall pole that the fledgling Fortuna Chamber Art and Culture Committee had proposed to put in front of the Monday Club. The offending message? The words "Believe there is good in the world," scrawled in purple paint, amid flowers, bees, butterflies and assortment of affirmations, like "Be Kind" and "Be Happy."

Glaser's staunch opposition to the placement of the pole on city property — which the committee hopes will be just the first of many such art poles placed throughout the Friendly City — seemed to surprise those in attendance.

"It just says, 'Believe there is good in the world,' and I don't really see how that's, like, too liberal or too crazy or too out there," said Art and Culture Committee Chair Jennifer Brown, who later returned to the podium to clarify that the pole says "good" not "god," just in case there had been any confusion. There hadn't been.

But much to Glaser's dismay, the balance of the council saw the proposal much differently.

"I'm not offended by it whatsoever," said Councilmember Jeremy Stanfield. "'Believe there is good in the world' should be a message everyone should embrace. There's nothing political about it."

The council voted 4-1, with Glaser dissenting, to accept the committee's donation of the pole and approve its placement in front of the Monday Club, where it was officially unveiled with a ribbon cutting Sept. 9. It will soon be joined by others.

Renee Lindsay, president and CEO of the Fortuna Chamber of Commerce, said two anonymous Fortuna residents have already pledged $1,000 each in matching funds for additional installations. The hope, Lindsay said, is that local artists will come forward to design vinyl wraps for the poles — which are made of 5-inch-square PVC piping. (The first installation, she said, was purchased online.)

At the council meeting, committee member Dianna Rios explained that inspiration from the project came not from Arcata but from Fortuna's scrappy neighbor to the north, Eureka. Rios said the committee was impressed by Eureka's recent public art efforts — from the plethora of new murals around town to the utility box project that has transformed the dull, street-side boxes into vibrant, whimsical works of art.

"We don't have utility boxes so we had to think outside the box, no pun intended, and things we can do in Fortuna," Lindsay said.

Rios told the council the committee also didn't want to "steal" Eureka's ideas, explaining that the committee then looked for other options and settled on the Peace Poles. She later clarified that Peace Pole is trademarked and the committee had purchased a knockoff — or a Peace Pole-inspired alternative — so they would call them "artists poles."

True Peace Poles — handcrafted, 6-foot-tall monuments emblazoned with the message "May Peace Prevail on Earth" on all four sides — began in post-World War II Japan, the brainchild of Masahisa Goi, who crafted the first one in 1955. The idea eventually blossomed into the Peace Pole Project, which is promoted by the World Peace Prayer Society and sells the poles for $100 apiece online.

Lindsay said she's excited to see artists poles pop up throughout Fortuna, noting there are already several on private property.

"There's such a great talent pool of artists in this area and I think we'll have some really beautiful pieces in the short run," Lindsay said. "It's not real intrusive. Just something to add some art into Fortuna and allow our creative residents to really showcase their talent."

The long-term plan, Lindsay said, is to have some kind of artists pole trail through town with a map that storeowners can give to tourists, allowing them to take a self-guided tour. She said anyone interested in donating to the effort, designing a pole or putting one on their property should contact the Fortuna Chamber of Commerce.

While Lindsay said the chamber has not received any negative feedback about the pole, it's clear at least one resident is mighty unhappy about it.

At the Aug. 18 meeting, Glaser tried several approaches — all of them unsuccessful — to sway his fellow council members into seeing that these artists poles may prove to be the city's downfall. First, he argued the words were the problem: "It should be neutral ... you want to put colored pasties and rainbows and whatever ... that should be the standard." Then he argued that if the city were to allow this pole on city property, it would "open up Pandora's box" and people could propose "any kind of horrific, nasty statement and you cannot deny it." Finally, he suggested the pole itself was the problem: "Instead of a pole, why can't you just do a plaquard? Four-feet tall, 1-foot wide and a quarter-inch-thick steel plate painted. ... It wouldn't have this symbolism that is Arcata blazing into our faces."

Really, he just hated the whole idea, throwing in a bit of Islamophobia to underscore his point.

"This is a personal insult to me," he said. "It says the same thing as a mosque being built by the Muslims. They conquered that spot, they made their statement. This peace pole is pacifism, this peace pole is liberalism and I don't believe in it."

Lindsay, however, does and said she is ecstatic with the new installation.

"For us, it's a very positive piece of art," she said. "We're not doing this to make a statement. It's just to bring art to Fortuna. It's a great design. It's got that nature aspect, which is what Fortuna is all about, with trails, heather gardens, the river."

Thadeus Greeson is the Journal's news editor. He prefers he/him pronouns and can be reached at 442-1400, extension 321, or thad@northcoastjournal.com. Follow him on Twitter @thadeusgreenson.