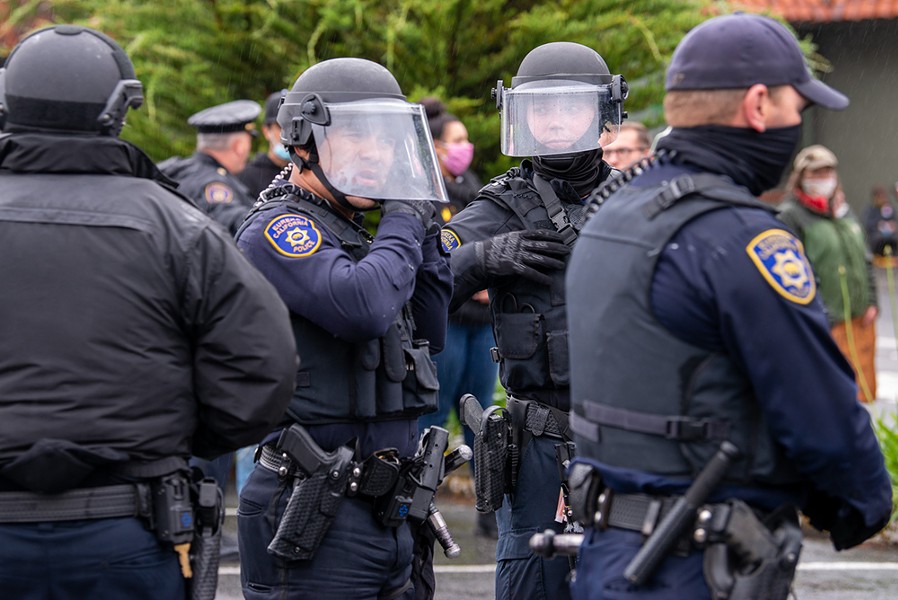 Photo by Mark McKenna EPD officers donned helmets as things got tense between law enforcement and protestors on May30.

When protesters convened in front of the Eureka Police Department headquarters June 1 for a far-reaching dialogue, there were calls for increased transparency and accountability, but one of the few tangible suggestions floated was implementing some form of civilian police oversight locally.

It's far from a new idea

The topic most recently gained traction in 2014, after Eureka police officers shot and killed Thomas "Tommy" McClain in a shooting the Humboldt County District Attorney's Office deemed legal and EPD determined a justifiable use of force but remained controversial. And seven years earlier, when Martin Cotton II died in police custody after a violent altercation with officers on the heels of four officer-involved shooting deaths in Eureka in less than a year, the subject reached a fever pitch. (Eureka settled a civil suit brought by McClain's family after a jury found EPD and McClain equally negligent in the shooting, and a jury awarded Cotton's family $5.4 million in 2011.)

But efforts at enacting some form of civilian oversight have repeatedly stalled, generally stuck between activists' desire to see something with teeth and the ability to hold officers accountable, and police officials and unions' unwillingness to relinquish control.

Currently, there are more than 200 civilian law enforcement oversight bodies sprinkled in communities throughout the country. They range widely in form and function, from robust independent bodies with paid staff and the power to conduct independent investigations into critical incidents and citizen complaints to less formal affairs that act largely as advisory boards.

In a paper submitted to President Barack Obama's Task Force on 21st Century Policing, the National Association for Civilian Oversight of Law Enforcement (NACOLE) said the "current crisis of mistrust and breaking or broken relationships between police and the community they are sworn to serve and protect is one of the most pressing challenges facing our nation." The paper goes on to tout civilian oversight bodies as a way to foster accountability, transparency and confidence, and to generally break down the walls that often exist between police and the public.

Yet this has repeatedly proven harder to achieve in practice. As examples, a critical incident review board empanelled by EPD after McClain's shooting was widely criticized in activist circles because it was comprised heavily of current or former officers and its findings were never made public, while a chief's advisory committee created at the same time was seen as having little authority.

Several questions need to be answered when weighing whether to enact some form of civilian oversight. Central among them are whether the oversight entity will exist simply to give police feedback on policies and procedures or to review critical incidents and citizen complaints. If the entity is the latter, the question is whether there's a budget, as the ability to have a paid staff — like is the case in Berkeley, Oakland, Long Beach and Los Angeles — greatly increases an entity's ability to conduct independent investigations, allowing it to act as an effective check and balance. Then there's the question of power: Would this entity have the authority to discipline officers if a citizen complaint is substantiated or an officer is found to have violated policy? Should the entity have subpoena power, or the ability to compel witnesses to testify and turn over evidence?

Traditionally, the more autonomy and authority a citizen oversight or review entity is given, the more pushback it gets from police chiefs and unions. It's generally a conversation fraught with competing interests, which is why — in Humboldt County, anyway — it is one that has yet to bear real fruit.

Thadeus Greenson is the Journal's news editor and prefers he/him. Reach him at 442-1400, extension 321, or thad@northcoastjournal.com. Follow him on Twitter @thadeusgreenson.