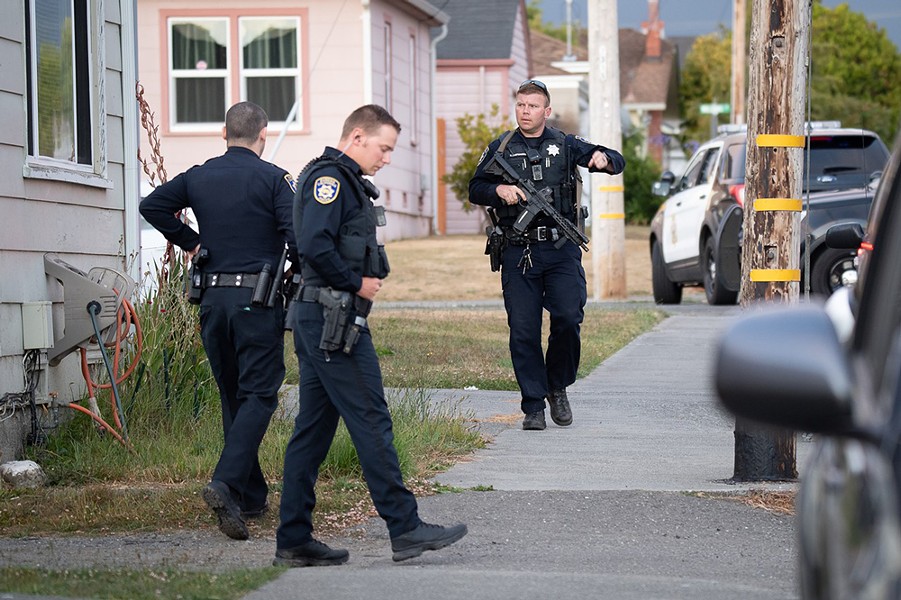 Mark McKenna Under a proposed ordinance, all critical incidents involving the Eureka Police Department would be reviewed by an independent police auditor.

With little fanfare, the Eureka City Council voted unanimously Nov. 2 to move forward with what, if finalized, will become the most robust police oversight policy in Humboldt County.

The council directed staff to issue a request for proposals (RFP) to hire an independent police auditor to work with the city's re-christened Citizens Accountability Board to provide independent reviews of Eureka Police Department policies and procedures, as well as citizen complaints, internal affairs investigations and serious uses of force.

Once the RFP process is complete, an ordinance outlining the transformation of the "Citizens Advisory Board" into a body with a sharper focus on oversight will come back before the council at a future date, but discussions at two recent meetings indicate broad support.

The advisory board's roots stretch back to 2015, when former Chief Andrew Mills launched a Chief's Advisory Panel, an informal group whose members were appointed by Mills and offered feedback on EPD policies and internal reviews. That panel was turned into a Citizens Advisory Board last year, with members appointed by the mayor and meetings held publicly and governed by the state's Ralph M. Brown Act. And if it wasn't evident in the name itself, the ordinance made very clear the board was solely there to provide input.

"The board acts as an advisory body to the chief of police," the current ordinance, which is slated to be repealed and replaced at a future meeting, lists as the board's first charge under its "powers and duties" section. "Recommendations made by the board are not binding on the chief."

The proposed ordinance doesn't really give the board more power — its recommendations still won't be binding and it won't have any ability to discipline officers — but it changes its mandate from acting as a "liaison" between the department and the community to one of oversight and transparency. Perhaps most importantly, the ordinance provides that the city would contract with an independent police auditor — a kind of third-party investigator — who works out of the City Manager's Office and in consultation with the board.

Under the RFP approved by the council Nov. 2, the independent auditor would have broad access to a wide breadth of materials to evaluate internal affairs investigations, the handling of complaints and allegations of misconduct, and probes of police shootings. In fact, not only would the auditor have access to full investigative files, but it would be cleared to conduct independent interviews of civilian witnesses and sit in on interviews of sworn officers and ask questions through the lead police investigator.

"IPA will provide evaluations as to whether an investigation is complete, thorough and objective and/or an explanation if more investigation or a change in finding is recommended," the RFP states, adding that if a third party is selected to conduct an investigation, the auditor would "assist in the selection of the investigator."

The system is essentially designed to put an independent check on internal departmental discipline processes.

Much of the information the auditor would have access to is confidential under the Police Officers Bill of Rights, which holds that almost all complaints and disciplinary actions are to be shielded from public view unless there's a sustained finding of dishonesty or sexual assault. But the draft ordinance and the RFP moved forward by the council make clear the auditor and the accountability board would be expected to distill the findings of their oversight into regular reports to the public.

And in cases in which the auditor deems an EPD investigation "insufficient" or the department declines to open one," and the auditor's recommendations aren't heeded, they could — with approval from the city manager and city attorney — launch an independent investigation. In those cases, EPD "will provide full access to all materials concerning the incident underlying the complaint and all relevant personnel."

The new system would also require that the auditor be notified as soon as the department receives a complaint or misconduct allegations, and that they be called out whenever there is a critical incident, whether it be a police shooting (regardless of whether anyone was injured) or a serious use of force.

It would also offer another venue for lodging complaints or misconduct allegations, all of which currently must go through the department, either by phone, an online form and in-person. The new system would allow members of the public — and departmental employees — to instead go to the auditor or a member of the board, who would then be required to also pass the complaint or allegation on to EPD.

The RFP is based on one recently issued by the city of Santa Cruz, where former Eureka Police Chief Andrew Mills served as chief for four years before recently accepting a similar post in Palm Springs. Eureka City Manager Miles Slattery said Mills was consulted on Eureka's proposal and seemed to feel using an independent police auditor had worked well in Santa Cruz.

Slattery told the council it's unclear exactly how much the auditor will cost, but estimated it will be around $70,000 to $80,000 annually based on what he's seen in other jurisdictions.

Regarding the Citizens Accountability Board, the council agreed at its Oct. 5 meeting to allow the previous board's seven members the opportunity to stay on under the new mandate. Moving forward, members will be nominated by the mayor and approved by the council. None of the board's members — or their close relatives — can be current or former EPD employees.

During the council's Oct. 5 meeting, the question arose of whether all former police officers should be prohibited from serving on the board. Councilmember Kati Moulton, who brought the issue of enhanced oversight forward at the council's July 20 meeting, setting the process in motion, said her intent was to make sure there was "citizen" oversight of police. But current EPD Chief Steve Watson said that while he understood that, he felt having the perspective of someone with police training on the board could be valuable, saying they can view use of force instances through a "radically different lens" than people who have never been trained.

Ultimately, Moulton and the council said they saw value in including that perspective, but only amended the ordinance so that a maximum of one of the board's seven members can be a retired officer.

The new system is being pushed forward at a time of turmoil and transition for EPD, with Watson having recently announced that he will step down as chief at the end of the month and an outside law firm currently evaluating disciplinary actions proposed by the city against EPD officers after a months-long investigation into violent, misogynistic and dehumanizing text messages shared between a unit of six EPD officers.

Moulton made clear at the council's Oct. 5 meeting, however, that her request for a more robust system of oversight was based on general principle and not any specific allegation or investigation at the department.

"I think this is a protection that we need to put in place for the future health and accountability of our police department and our community," she said.

The RFP requires that proposals to serve as the city's independent police auditor are due Jan. 7, and the city hopes to have the position filled early next year. Once the auditor is in place, the council would take up final approval of the accountability board ordinance.