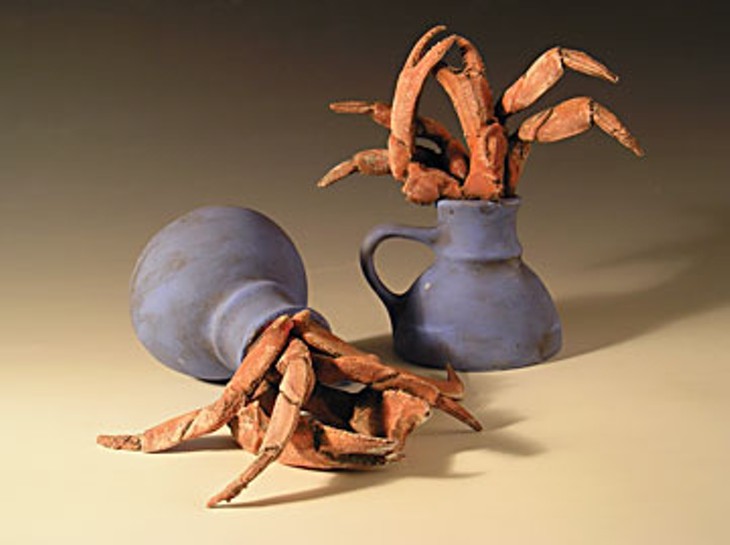 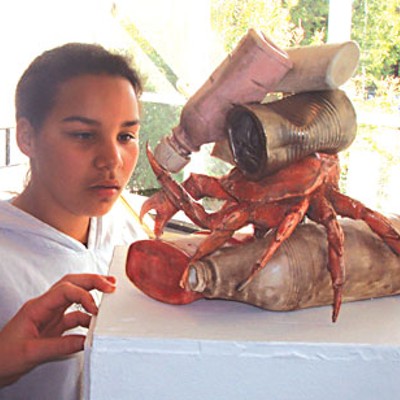 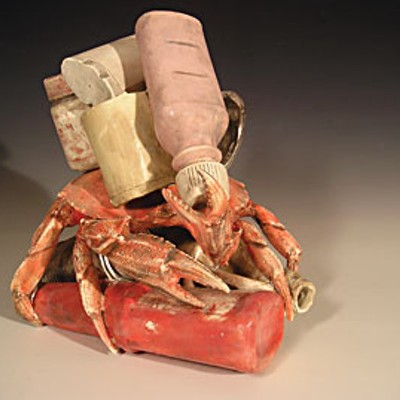 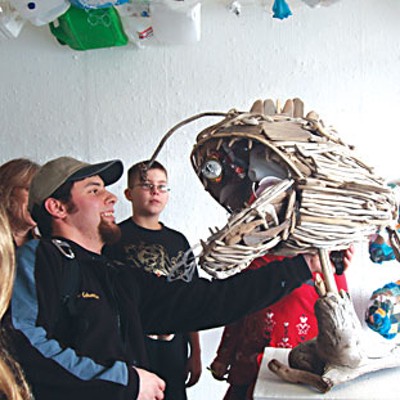 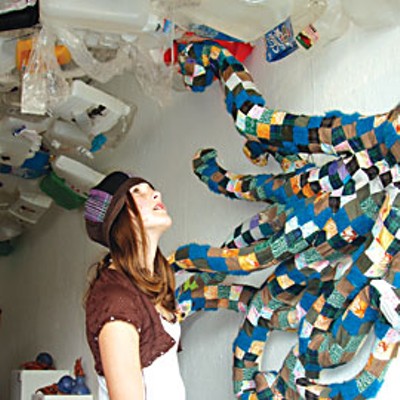 Walking into the Foyer Gallery on the HSU campus yesterday, I was overwhelmed with a feeling of oppression. The installation piece there consists of a net of plastic garbage, glued, stapled and tied together and suspended from the ceiling. The idea is to give the viewer a feel for what it might be like in the ocean directly beneath what's known as the Pacific Garbage Patch.

Have you heard of this phenomenon? I hadn't, although I like to think of myself as environmentally aware. It's an area called the North Pacific Gyre in a remote part of the Pacific, also known as the horse latitudes. Sailors historically avoided it because of the lack of wind and currents. Everything that floats on the Pacific is pulled into this vortex of ocean currents and winds up stuck there. For centuries that was just fine, but with the invention of non-biodegradable materials — plastics — comes a problem. A mass of garbage has accumulated. Its size is a point of contention, but it's safe to say it's at least as big as Texas.

Ponder that for a moment, if you will. The size of Texas. Some say twice the size of Texas. Now you know where all those plastic water bottles discarded at the beach end up. I've always wondered myself.

The point that artist Jimmie Nord is trying to make is immediately apparent when you walk in the place. Pollution is a big problem, it's oppressive and it's up to us to get creative about it.

Jimmie is young, enthusiastic and bristling with big ideas. He's been part of the Arcata Plaza Beautification project (the sculpture on the northwest corner of the Plaza is his). He's won awards for his sculptures at HSU and at the Junque Arte show at the Morris Graves Museum. He will be finishing up at HSU in the next year or two and is planning on graduate school when he's finished.

He didn't set out to make art with a political stance. His first involvement with art was through his interest in the Kinetic Sculpture Race. "I've been watching the race my whole life," he says. "When I was a little kid I looked up at my mom and said, 'I want to do that some day.'" And he did — he's been in the race for the past four years.

The environmental angle came out through his art because it's something that concerns him, and now he wants to pursue that angle. He's interested in educating people through his artwork — being the voice of the ocean animals, as it were. So his ceramic crabs sport discarded cans and plastic bottles, a giant sea turtle made of driftwood struggles with a trashed fishing net and crab legs poke out of the top of a coffee mug.

The largest piece in the show is a giant squid whose skin is patchworked fabrics. "The Squilt is the problem and the solution. The fabric is made up of non-natural materials that won't biodegrade in our lifetime," he says in his

Quilting has a tradition of group creativity, and indeed, Jimmie enlisted the help of his family to create his "squilt." People working together to find solutions is, he believes, the direction we need to be going in. As he states, "We are the problem but we must also be the solution."

So the message is serious, but the medium shows a sense of humor. I thought about this, especially in comparison to John Mahoney's Exclusion Zone, the last show I wrote about. I asked Jimmie point blank: At this point do we have the luxury of humor?

"With humor people are coming out of [the show] with a positive aspect," he explained. "If we think negative, that's what we're going to get."

Personally, I'm still wavering on this point. I'd like to believe in the power of positive thinking, but I also see humor used as a way of avoiding serious issues. It can be a great educational tool, something to draw people into the conversation, and that is certainly Jimmie's overarching goal.

And for that reason, it was fortuitous that he happened to be around when a group of students from Peninsula Union School showed up wanting a tour of the art department. We were five minutes into our interview when the department secretary interrupted us and asked if he could do it. They both looked at me apologetically, but I thought it was serendipity. I enjoyed watching Jimmie share his enthusiasm for art, watching the kids take in his show. They were full of questions, barely able to wait for the answers before they were on to new ones. It's difficult to say how much of the pollution point they absorbed, but they certainly recognized the garbage for what it was.

It's clear that Jimmie is an artist to watch. His craftsmanship is meticulous, his work is intriguing. He has the ability to capture the viewer right away, and his ideas are powerful. In fact, the weakest point of this show is his artist's statement, which explains too much. My advice: Look at the artwork and draw your own conclusions. His passion and concern are readily apparent without any

Jimmie Nord's installation How Do You Explain Pollution? will be up at the Foyer Gallery on the HSU campus until March 15. A closing reception will be held during Arts! Arcata on March 14.