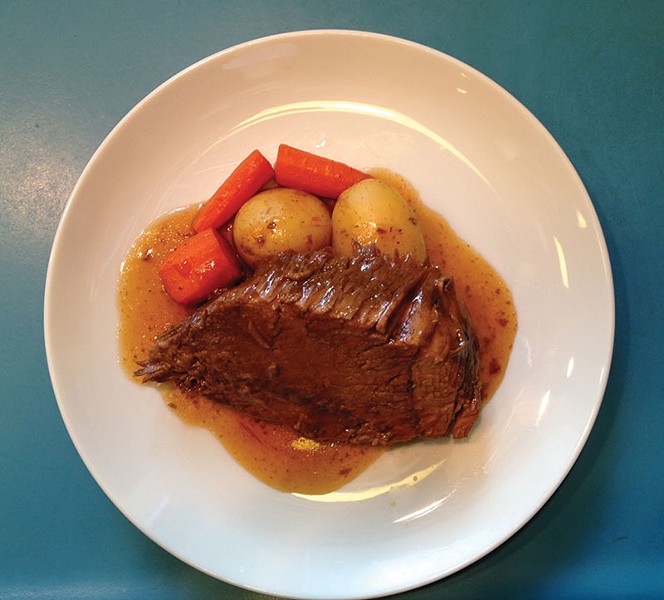 Photo by Jennifer Fumiko Cahill A Sunday dinner that doesn't eat your Sunday.

Even amid sea changes in family and gender roles, with parents sharing more equally in childrearing and wage-earning duties, Father's Day continues to kind of suck rocks. More and more dads are changing diapers and making dinner, so where are the brunches and spa days? Where is the birthstone-encrusted man jewelry?

One mother I know, who shall remain nameless, even forgot Father's Day all together a few years ago. OK, I did that. And the "Surprise Father's Day" I tried to pull off a few weeks later did nothing to assuage my rightful mortification.

I offer this recipe — something fathers will love cooking and eating —by way of universal apology. It's from my husband's paternal grandmother from Oklahoma, where beer was cheap and soy sauce was an exotic ingredient. The sliced beef falls apart and the gravy is gravy — a rich, dark and roasty sauce you will want to mop up with bread (and later, alone in the kitchen, with fingers). It's also shockingly easy. Just dump beer, soy sauce and meat in a Dutch oven, then a little thickening for the gravy. No browning, no turning, nothing. Put it in the oven and walk away.

But shouldn't you at least ... No. Walk away. Watch the game, read a book — whatever it is you usually dream of doing when you're trapped at the stove. If you need carrots and potatoes with your pot roast, you can toss small potatoes and chunks of carrot in the pot for the last 20 to 30 minutes. Otherwise, relax. Maybe call your dad.

Cooking this a day ahead just makes it better. The traditional beer is cheap and canned, yielding a mild gravy with some depth, but a stout will give it a heavier Guinness stew flavor.

1/4 cup flour or cornstarch mixed with water until runny

Preheat the oven to 325 F. Rinse the roast and pat it dry. Trim the excess fat on the outside and place the roast in a heavy, oven-proof pot with a lid. Pour in the soy sauce and the beer. Cover it and place it in the oven for 3 hours, until tender. A 4-pound roast may need 3 1/2 hours.

Remove the meat and let it rest for 15 minutes before slicing. Meanwhile, skim some of the fat from the juice in the pot and whisk in the flour or cornstarch until it's as thick as you like. Slice the meat and return it to the gravy. Serve with egg noodles, rice or a pile of mashed potatoes.