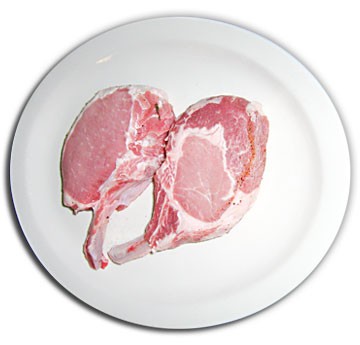 Last week's "Table Talk" described how a national aversion to saturated fats was exploited by the National Pork Board in two ways: First, in creating "Pork -- the Other White Meat" as slogan and campaign. Second, by breeding and raising pigs in confinement, and with low-fat, antibiotic-laced diets. The column detailed the literally odious methods used by commodity hog producers, which have lately been countered, in part, by increased consumer awareness.

Unsurprisingly, marketers have become savvy of this awareness, and have begun to use "green" labeling in their PR. But companies that use phrases like "natural" and "organic" seldom mean "pastured" or "free-range." Corporations love to imply, and their interpretation of green-friendly terminology is often different than what a consumer would infer. For instance, Petaluma Farms' Rosie and Rocky chickens are labeled "free-range" but they never leave the building in which they are raised. Michael Pollan, author of The Omnivore's Dilemma, calls such disingenuous marketing "supermarket pastoral."

Grocery chains do not buy from family farms. Successful marketing of commodity pork has forced most such farms out of business. There are still family-run hog farms, but rising feed prices mean there are not as many. A handful survive by selling direct to upscale restaurants. But that wouldn't help me find my ideal pork chop. I began my quest searching for online farms and farmer cooperatives that used traditional methods: 1) free-range, or pastured animals, 2) piglets not weaned until at least six weeks and 3) pigs fed a hormone/antibiotic-free diet that was not low-fat.

My first two online encounters with a pork chop were, like most blind dates, a flop. They were 1 1/2-inch thick Berkshire rib chops from New York and Chicago distributors who coordinate small farms all around the country. The price ranged from $14 to $25 per pound, including shipping. Alas, while flavorful, the chops were tough and dry -- evident victims of the ubiquitous obsession for lean pork.

I discovered that it's not easy to restore the fat content of hogs to earlier standards. "We strive for 48-51 percent lean," rancher Paul Willis told me. "The commodity hogs are 52-55 percent lean. That may seem like a small difference, but it is major to flavor. And we have difficulty doing it -- through genetic selection, American pigs have been re-engineered, and it's not easy to put the genie back in the bottle."

Willis raises pigs for Niman Ranch, a company based in Oakland/Alameda, which has been a rare positive force over the past four decades, seeking out small farms and creating a brand of natural, pastured meat.

Willis' Iowa farm was featured in a piece by food-blogger Alanna Kellogg, complete with photographs of "happy pigs," some curiously nosing visitors, others blissfully oblivious in mud baths. There were open fields, and hundreds of pigs. Remember the stench of the Kentucky facility? Kellogg wrote, "Much to everyone's surprise, the odor was earthy, almost sweet, completely pleasant."

Do happy pigs taste better? "Pastured hogs get more daylight, which means a lot of natural Vitamin D," Paul Willis told me. "They get exercise, which produces marbled meat, and they get natural nutrients from the soil and air."

From the soil? Really? "Absolutely. That's why pigs root -- they have no natural source of iron, for instance, so they eat dirt, as well as bugs and worms, since they're omnivorous. They eat grass, which has little nutritional value, but is full of trace vitamins and minerals. And good air is an important factor in the health and emotional life of all animals."

Confined animals are consuming hydrogen sulfide and ammonia with every breath. Living unconfined leads to more exercise and more collagen, and better air leads to better respiratory systems, which translates to better health. And healthier animals would seem to mean better meat.

On my third blind date, I fell in love. Thompson Farms in south Georgia, the only small farm I was able to reach (just 50 sows), sent 2-inch thick, perfectly marbled loin chops. It was better than my fondest memory, every bite tender, flavorful, and rich. Mostly Duroc, their hogs are pastured, with wooden huts for farrowing, and weaned at six weeks. Air freight is expensive, but $18 per pound (shipping included) is a bargain for what are arguably the nation's best pork chops.

Finally, I ordered Niman Ranch pork chops. I'd been postponing this, assuming they would be perfection. After all, Bill Niman originated the return to farm-raised pork as a small supplier to Alice Waters' legendary Chez Panisse in Berkeley. (In fact, the whole idea of "California Cuisine" stems from the concept of natural, organic, sustainable and, if possible, local and seasonal food.) The Niman company distributes to two major chains, Whole Foods and Trader Joe's.

Two 1 1/2-inch rib chops arrived: One had perfect marbling; the other was unmistakably lean. Both in the same Cryovac packet, but the first moist and tender, the second slightly dry. Why? Well, it could be because they came from different animals. Each farm in the Niman circuit is different. Within the company's specifications, the farmers make their own decisions.

For example, in choosing the breed. Some strains have more marbling, some less. Or letting the young pigs forage in scrub or woods rather than grassland, or in letting them suckle longer. All Niman farmers are involved in returning to natural food. Natural food is diverse, not homogeneous.

The only sure way to get the particular thickness and marbling and flavor I seek is to have a local meat department carry pastured pork, so I can look at the chops and choose for myself (and shoppers who do want lean pork chops can do the same). Niman Ranch (available at Murphy's Sunnybrae) and Beelers (available at the Co-op and Eureka Natural Foods) provide such options.

Are we willing to pay more for superior quality and better flavor?

I called Bill Niman at his Bolinas ranch. "How can our culture of cheap meat be changed?" I asked. "Well," he said, "Respect for the land implies respect for the animals we eat, and that's changed slaughterhouse practices. And most people are coming to recognize that genetic diversity is a good thing, even within a breed -- it contributes to hybrid vigor -- so we respect the farmers, and their right to make their own decisions, within certain protocols, such as ethical treatment." Niman hog farmers are audited for compliance with Animal Welfare Institute rules.

An interesting concept: Underlying the health of the ecosystem, and sustainable agriculture, is a kind of respect. Respect for the land, for the farmers and for the animals.

Philosophical considerations aside, is $15/lb (say, $18 for two thick 10-oz. loin chops) extravagant? Well, it depends. Of course, dining out would cost a lot more. But let's say it is extravagant. It may be worth eating meat less often, only better.

When I feel guilty for indulging my own belly, I turn to the Gospel According to St. Julia: "What's dangerous and discouraging about this era is that people really are afraid of their food," Child said in 1989. "Learn what you can eat, and enjoy it thoroughly."