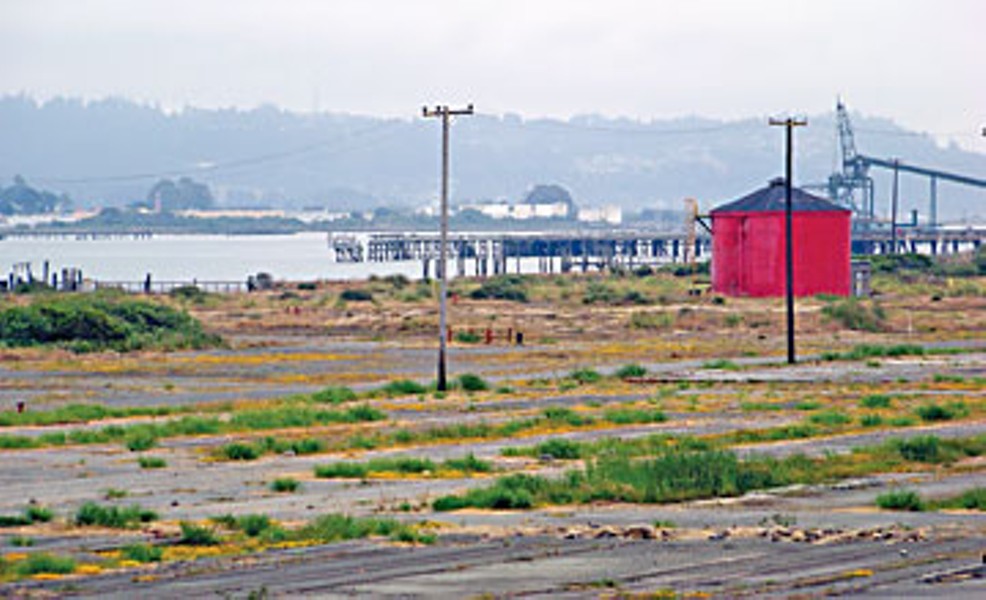 The southern end of the Redwood Marine Terminal. Photo by Heidi Walters

It’s been a month since more than a hundred people crammed into the Wharfinger Building to first hear a plan to turn Humboldt Bay into a major industrial, international shipping port connected to the railroad, with a big cruise-ship enterprise on the side -- and to let one of the world’s top investment banking firms, Goldman Sachs, auction off the whole shebang to private investors. In another month, a decision will likely be made on both of these.

The proposed deal has launched yet another battle in the ongoing Humboldt war of the angsts, pitching the we-need-jobs set against the beware-corporate-rule set, the let’s-revive-the-railroad-and-port set against the let’s-?conserve-?and-?market-?our-?environmental-?assets set.

But it could be a definitive fight: If the Humboldt Bay Harbor, Recreation and Conservation District’s Board of Commissioners votes to approve consultant TranSystems’ business plan for developing the Redwood Marine Terminal, on Samoa, and if it votes to allow the district to contract with Goldman Sachs to swing the finances to make it all happen, the Port of Humboldt’s new path will be chosen.

Some say it would be a path to riches. Others, to ruin.

The Redwood Marine Terminal is an 80-acre elongation of post-industrial wasteland, left over from the timber heyday, bordering Humboldt Bay harbor on the Samoa Peninsula. The district obtained the property in two pieces, in 2004 and 2006, to further its objective to make the Port of Humboldt competitive in the Pacific Rim shipping trade. A harbor deepening project was completed in 2000 as part of that plan. Last year, with $200,000 from the Headwaters Fund, the district hired TranSystems to develop a business plan for the Redwood Marine Terminal.

The draft plan that TranSystems presented to a full house on June 26 recommends that the district first build and market a multipurpose berth for handling cargo ships, barges and cruise ships, as well as aquaculture and warehousing. That could take five years. Then, the district would pursue long-term development of the terminal, in conjunction with rehabilitation of the railroad, to entice a steady stream of container ships into port. That could take 10 years. The district would be the landlord port authority, and could turn over the “lease, design, construction and operation” of the long-term expansion to a private sector concessionaire. For the long-term expansion, the district would need to form a joint-concession with the North Coast Railroad Authority (which already has a long-term agreement with operator John Williams of NWP).

The plan suggests the district take on about $35 million in revenue bond debt to construct the multipurpose berth. According to one of TranSystems’ models, the debt could be paid back over five years through various pilotage, wharfage, passenger, storage and other fees, but would start seeing positive cash flow in the sixth year of its operation. Over 20 years of operation, the model says the district could generate a 14.3 percent internal rate of return. But it depends on how well the shipping and cruise businesses actually do -- in a worst-case scenario, the debt would be hard to pay back.

The business plan suggests that the district court private investors to finance the major port infrastructure development. Enter Goldman Sachs -- purportedly unsolicited – who, in May, offered to become the district’s chief financial advisor on the project. The firm would find a concessionaire, auction the port assets and help negotiate other transactions.

“The firm would act as the sell-side advisor to the District for the concession and would be compensated only if and when the concession is successful,” wrote Goldman Sachs Vice President Jeffrey Holt in a May 9 letter to David Hull, Chief Executive Officer of the HBHRC District. Holt noted a promising, growing trend of pension funds investing long-term in infrastructure assets.

Some people have practically swooned over Goldman Sachs’ offer. At the June 26 meeting, Patricia Daly said she’d been in the county 52 years and she’s tired of how things have been going.

“We need barging, we need a railroad, we need so much up here,” she said. “We need to be polished. We need to be helped. I mean, Goldman Sachs -- gosh, international bankers. We need their help.”

Others, however, view the business plan, and Goldman Sachs’ timely appearance on the scene, with a more jaundiced eye. Greg King, executive director of the Northcoast Environmental Center, said the business plan doesn’t include conservation or recreation, let alone consider the environmental impacts of, say, an influx of cruise ships into the harbor. Others worried about giving up local control of the port, one person going so far as to compare it to the takeover of Pacific Lumber by Maxxam. "I don’t know about this idea," said one man. "It sounds kind of fishy to me."

Harbor commissioner Patrick Higgins said at the meeting, and in other venues, that he is against adopting the business plan, and against signing an agreement with Goldman Sachs. He says the plan is based on flawed assumptions about the future of trade with Asia, as well as with Humboldt’s position in that market. He adds that just the time and money the district would have to invest in the pre-project environmental analyses could alone make the district insolvent in a hurry.

Contrary to the business plan’s assumptions, says Higgins, competition among ports is only going to grow. The Panama Canal is being expanded, as are ports on the Gulf, in the East and, more to the point, on the West Coast. But, says Higgins, the slowdown of the United States’ economy has led to a decline in the container and auto shipping trade with Asia. Soon, West Coast ports will be “overbuilt,” he says, and competing for diminished trade. Humboldt’s remoteness puts it at yet a deeper disadvantage.

Higgins adds that efforts to expand West Coast cruise shipping are exploratory at this point -- not a sound basis for making the lucrative projections TranSystems has made.

There are aspects to the multifaceted plan that Higgins finds more likely, such as developing the Samoa museum complex, and aquaculture -- but neither require large-scale development or deep dredging.

Hull answers that the district is just negotiating an engagement agreement with Goldman Sachs. The agreement will have "a long list of conditions" for a future lessee, he said, including who pays for the multiberth construction.

"We’re not selling them the property," Hull said. "And if they default on a condition, we take it back."

Hull says there have been no formal talks with the NCRA yet about the big plan. NCRA board member Charles Ollivier said last week that his board’s too busy on another stretch of the line, and that the Port of Humboldt and Goldman Sachs’ joint concession idea hasn’t come up yet. The goal, says Hull, is to get Goldman Sachs on board first, then deal with specifics. If it turns out the NCRA’s not interested, then Goldman Sachs “walks away.”

As for conservation and recreation, Hull says the district needs money first to be able to tackle those less lucrative, but equally important, endeavors. And he trusts the business plan to bring in the money. The fact that Goldman Sachs has come along also impresses him.

“There’s the credibility: If they think it can work, that says a lot," says Hull. “I don’t know that we would do any better than Goldman Sachs."

It is possible, however, that Goldman Sachs doesn’t care one way or the other if the venture brings in money -- all it needs to do is sell the assets to a concessionaire and take its cut, critics say. If the concession fails, no lease payments. No lease payments, no debt reduction -- or, at best, no money coming in and a port locked up in a private concession. And, in the meantime, the district may have passed up other, less grand-scale opportunities in favor of the big venture.

Goldman Sachs representatives declined to be interviewed for this story.

But Hull insists that the district is beholden to the entire state to do something. “If it looks like, after three or four years, [the plan] is going nowhere, the board will have to make a decision,” he said. “But if there’s any chance of it working, we have to try. To not try would be wrong.”

The next harbor commission meeting is this Thursday, July 24, at Woodley Island. The comment period for the business plan ends Aug. 30.