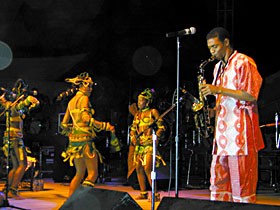 If you dig African music, you probably don’t need to know much more than the fact that saxophonist/bandleader Femi Kuti is the eldest son of Fela Anikulapo Kuti, the undisputed Godfather of Afrobeat. If you know that, then you know you want to hear him play on Monday.

Femi quit school in 1978 to take a place in his father’s band, Egypt 80. A few years later he found himself leading Fela’s band when his revolutionary father was jailed for two years for his rebellious ways. Upon Fela’s release, Femi struck off on his own, creating an outfit he calls Positive Force. With the group, Femi delivers his take on Afrobeat, a horns and percussion-driven merger of primal rhythms and Nigerian highlife with the drive of funk and the freedom of jazz. When Fela died in 1997, Femi was heir apparent to the Afrobeat throne and became the crown prince. The funky style is still going strong, with American bands like Antibalas out of New York City, Albino from San Francisco (playing locally Aug. 22) and, locally, a new outfit called Afromassive. Those who caught Femi at Reggae in 2000 know he’s the real deal.

His show at the Mateel Monday, July 23, is billed as “a very special Mateel Forever fundraising event.” What exactly does that mean? “Essentially any show we do that is referred to as a Mateel Forever event is offered to support keeping the hall open and our programs alive,” says Mateel staffer Justin Crellin. OK, but as opposed to what? It’s not like Femi’s coming up here for free. It’s a show like any other where the Mateel hopes enough people buy tickets to cover costs and have something left for the organization.

I’m guessing flames will flare over my saying so, but I’m growing tired of the bunker mentality that the “Forever” suffix seems to represent, just as I’m tiring of the ongoing “Reggae War,” its associated moral posturing, name-calling and general negativity. Can peace, love and unity ever come back to SoHum?

Is there a connection between the Reggae War and Army , the reggae singer from the Virgin Islands appearing at Indigo on Thursday, July 19? Not the slightest. Born Fritzmaurice Williams and raised on St. Croix, Army was in the U.S. Army before he became lead singer for the X Factor Band. His mission, as noted on the Sierra Nevada World Music Fest website: “To send positive universal messages to people through my music, without the commercialism we see so much today.”

Saturday, July 21, around the time Humboldt Folklife’s All Day Free Fest rolls to a close, the Jambalaya marks the start of the “Everybody Hates The Eagles But Me Tour,” featuring the Portland-based country punk band My Life In Black and White and Blue Lake-based punk country band The Rubberneckers , both of them led by singers whose whiskey and cigarettes voices draw on the sound of Shane MacGowan of The Pogues.

What’s My Life In Black and White all about? “Well, we’re really just a combination of things,” says lead singer Dylan Summers. “We try to be as eclectic as possible. We’re definitely ’77 punk rock in feel and mood, but a couple of guys in the band are metal heads. I really like traditional Irish stuff like The Pogues, stuff like that.”

Wait a second, The Pogues are traditional Irish? Isn’t traditional more like reels and jigs and old Celtic music? “Oh, you mean like The Chieftains? Of course if we tried to go the full extreme and played like The Chieftains or The Dubliners, all those old guys, it’s beautiful and I love it, but it’s not gonna make it. I need something with more of a beat behind it. But as far as the themes of travel and the Irish feel, it’s definitely there, but it’s more of a pub approach.”

Note: While Saturday’s show at the Jam is first on the 21 shows in 22 days marathon (with special guests The Bucky Walters , fresh from Folklife), the official “tour kickoff” is on Sunday at The ’Neckers’ home base, The Logger Bar.

Former local Easton Stuard is back in town this weekend with one of his Oregonian bands, Disco Organica . Easton’s cool keyboard and flute provide part of the organic side, along with jazzy mellow vocals from chanteuse Erin Flood . Turntablist Hector Gutierezz drops in subtle scratching and samples for the disco side; guitar, bass and drums mix in funk and soul. The band has three shows lined up: Thursday at the Jam with funksters The Bump Foundation , Saturday at the Pearl, then Sunday at Six Rivers.

Myshkin plays guitar and sings handcrafted songs telling tales of tattooed vagabonds and such; Sailor Banks is her bass-thumping partner. Together they are Myshkin’s Ruby Warblers , whose “gypsy torch punk chanteuse” self-description doesn’t quite do them justice. Catch them Friday, July 20, at Muddy’s Hot Cup and make up your own description.

Humboldt Free Radio gets busy this week bringing four rock shows to the Alibi: First up is a double-bill Friday with relentlessly loud, hard and heavy locals Dragged by Horses paired with ex-local post-rockers Walking Bicycles . Vocalist Jocelyn Summers and guitarist Julius Moriarty started the Bicycles in Eureka ... when was it? Almost four years back? Humboldt just wasn’t dark and gritty enough to match the jagged music and lyrics they had in them, so they took off a couple of years ago for the bright lights of the windy city of Chicago and found a new rhythm section. Judging by the discs they’ve produced since, the place suits them. BTW, their discs are not just CDs. These old school post-rockers are into vinyl, too.

Saturday at the Alibi: The Baby Arms , a newish punk band from Eureka (former members of The DTs) plus TRICLOPS! a wildly intense psyche-punk four-piece from S.F. formed from the remnants of Bottles+Skulls, The Fleshies, Victim’s Family and Hellworms.

Then on Sunday, July 22, it’s Howlin’ Rain , a semi-folky trio led by Ethan Miller , singer and guitarist for Comets on Fire (another band with local connections) who says, “We put Howlin’ Rain together with the intention of making a good old-fashioned free-wheeling rock album with a bared soul and a body in which joy, hysteria and darkness all lie upon the same rambling bones.” (His songs are as poetic as his self-description.) They’re here with a neo-psyche band from the City (S.F.) called Citay , who somehow remind me of the Summer of Love.

Wait, there’s still another HFR gig Wednesday night at The Alibi, with two more from San Fran: Alt. Tentacles Records’ black metalites Ludicra plus Orb of Confusion with Chris Corona of Floating Goat, both bands playing super-heavy music that will definitely not take you back to the Summer of Love.

More loudness Saturday as the Sound Pollution Tour (seemingly assembled by podcasters) brings an overdose of screaming Fresno thrash to the Boiler Room, including Speakers for the Dead , Mynis and Absit .

Bigfoot may be a local phenomenon, but hard-driving psychobilly band Sasquatch and the Sick-A-Billys ain’t local; they’re from Providence, R.I. A national tour brings them to the Boiler Room Monday, July 23.

I suspected there’d be trouble when I heard Amy from KHUM tell the crowd at Blues by the Bay there’d be no dancing in the area in front of the stage. There was. Apparently there were also strict rules about chair height, with yardsticks wielded for enforcement. (No, not on knuckles.) Those who grew tired of being corralled by caution tape fences eventually succumbed to the beat of Charlie Musselwhite’s band, rose up and broke through. Dave Hardy from the yellow-shirted security crew got the worst of it when Amy reversed her position without consulting the overseers. Poor Dave suffered a broken finger trying to hold back the tide of dancing Baby Boomers reliving their rebellious youth. I’m thinking this’ll be a hot topic at the next Redwood Coast Music Festivals board meeting. We’ll see what rules survive when BbtB rolls around next summer.