by Joseph Byrd and Bob Doran 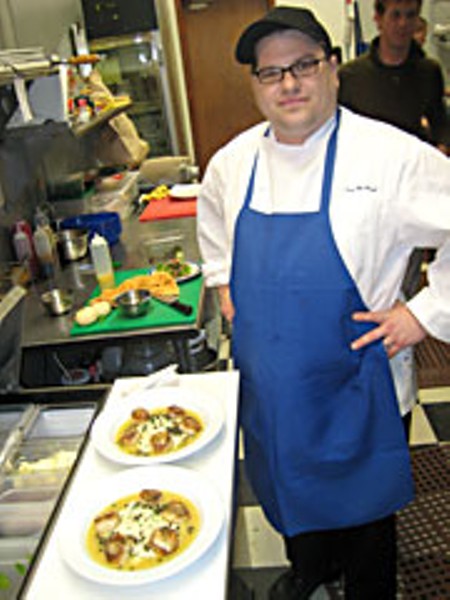 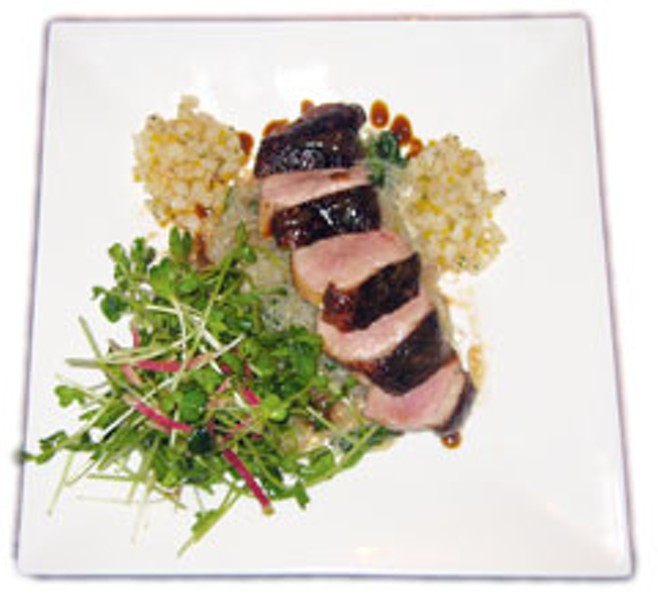 Smashed potatoes? You read it right. I found those intriguing words on a Post-it note my wife Amy left on our kitchen counter a few weeks back, then by chance saw them again on the menu of my new favorite restaurant, the F St. Café. We'll get to how that happened later, but first let's introduce the chef at F St.

Regular readers of this column know that I had a long history in the restaurant trade before I escaped to write fulltime for the Journal. I worked alongside a fair number of cooks, among them Dan McHugh, who was on the line with me at Bay City Grill sometime in the '90s. He's a talented guy with a long history in the local area. He started as a dishdog at Ramone's on Opera Alley (before it became a bakery), and has since worked at some of Humboldt's better establishments, including Restaurant 301 at Hotel Carter, Tomo, Larrupin' and Folie Douce.

He's showed up on the pages of the Journal a couple of times. I interviewed him for a piece on wild mushrooms ("Forest to Table," Nov. 17, 2005) and later wrote about his wedding dinner ("Catering His Own Wedding," Aug. 17, 2006). I've always been impressed by his cooking, so I was delighted when I heard he was opening his own place in Eureka, F St. Café.

A little history of the space: The new café is away from downtown in the same block as Eureka Art and Frame Co., in the place once occupied by the White Cat, a fine artisan bakery run by a young couple who made great bread but had little business sense. It later became La Casita, a neighborhood Mexican restaurant that for a time went international in the hands of the amazing chef Mahmoud Shaheen. Mahmoud's employers disappeared after stripping the place, leaving only the brick oven built by the White Cat kids. As Dan put it when we talked the other night, all that was left was "a layer of taco grease."

Dan and his wife Heidi scrubbed the grease away and put in a new kitchen. They've added some room dividers to break up the dining room and applied a new coat of paint, but otherwise it looks pretty much the same as it did before. It's unpretentious, no tablecloths, the emphasis is on the food. And the food is good.

After my first meal there, I recommended it to my Table Talk colleague Joseph Byrd. He had dinner there last week with his wife Beni and sent me his notes, so you get two reviews — sometimes dueling — for the price of one.

Amy and I started with the wood-fire pizza. The place offers several standard choices at lunch and dinner, large or small. There's the classic "Margherita" (with marinara, mozzarella, parmesan and basil), "The F St. Chicken" (with roast chicken, Pt. Reyes blue cheese, pancetta and fresh tomatoes) and one called "The Goat," with Cypress Grove cheeses and Henry's olives among other things.

We went with that day's special pizza (suggested by Dan): porcini mushrooms, mozzarella, fresh thyme and crispy bits of leek. The crust was absolutely perfect, the subtle flavors of the toppings melding with it for a great starter that could also serve as a main course. Joseph declared his Cypress Grove goat cheese version, "The best pizza we've had in Humboldt County. Crisp, rich crust and a perfect balance of flavors."

We followed with soup and salad — specifically, a Humboldt-style spinach salad, lightly dressed with vinaigrette and sprinkled with bits of Henry's olives, crumbles of Cypress Grove Midnight Moon cheese and — an unusual touch — crispy bits of sliced shallots that supplied a crunch like bacon bits. Marvelous. The soup du jour was a wild mushroom affair with chanterelles, boletes and potato simmered in chicken stock with just the right amount of wild lemon thyme and topped with croutons. My only real complaint about anything was the fact that they don't have proper soupspoons for the soup, just flat tablespoons.

Coincidentally, Joseph's prime complaint was also somewhat silverware-related. He didn't like the steak knife that came with his American Kobe beef, a top sirloin, which he deemed "too tough and uncuttable with the implements provided."

Now this is a point where I disagree, on the steak anyway. (A knife is just a knife.) Amy and I shared the steak and I jotted down a couple of notes on my menu: "spinach bed" (it was sliced and served on top of spinach) and "incredibly tender." Maybe we just got a better piece of meat. I loved it.

Now I'll admit I'd never heard of "American Kobe beef." I know a little bit about Kobe beef — that it's known for its marbling and is prized (and very expensive) in Japan. Kobe is the capital of a region in Japan where the cattle are raised with secret methods that supposedly include giving them massages and feeding them beer. The American version comes from Snake River Farms in Idaho, where they've crossed the Japanese Waygu breed with a Black Angus strain. The cattle don't get beer, but according to the Snake River folks they are fed "a natural diet of barley, golden wheat straw, alfalfa hay and Idaho potatoes."

Regarding the steak, Joseph adds, "On the other hand, it came with the most original potato dish I've had in years: ‘smashed potatoes.'" Here's where that cryptic note comes in. Amy and Dan both happened to see part of an episode of the Food Network show Chef at Home with Michael Smith, where the chef flattened a baked potato then re-baked it, crisping the skin. Amy reproduced the recipe (see below) using day-old bakers and omitting the fennel seeds. (We didn't have any.) Dan adapted the concept. He uses boiled red potatoes and cooks them in the wood-fired oven, which makes them extra good.

Our second dish was skate, a fish I haven't eaten much, baked to a delicate flakiness, served on a bed of cauliflower puree and topped with a mound of arugula and daikon that made for an interesting contrast in color and flavor. Bits of crisped Meyer lemon and capers added flashes of tang and saltiness. Amy is not usually much of a fish eater, but she loved it because it was not at all fishy.

I was tempted by the cassoulet, but figured I'd try it another night. However, Joseph and Beni had it. Joseph writes: "I am impressed that this classic bistro dish has finally found a local home. It was not perfect, but it was actually better than we had in Paris. Chef Dan wisely purchases whole duck for his duck breast entrées, turning the rest of the meat into a confit, and making stock from the carcass. The slow roasting of white beans, homemade sausage, duck shreds and stock, together with carrot, shallot and garlic, makes a magical casserole, aside from a little dryness and too much rosemary (the Humboldt Rosemary Syndrome). But a fine effort overall, which time will only improve. I hope this becomes a signature dish, because I have been procrastinating making it for years and it's still not on the horizon."

Fair warning: The menu at F St. is limited and it changes regularly. Dishes like the cassoulet are made in small batches and seasonal ingredients come and go. As a result, friends who went looking for the skate we'd had did not find it. And when I returned for dinner this weekend the cassoulet was not available. I didn't mind. Instead I had the pan-seared Pekin duck breast with an Asian pear relish, which was positively divine. I brought my mom; she just had soup and salad. It was a different soup du jour, cream of parsnip — drizzled with beet puree, with shreds of mustard greens and bits of pistachio on top. (She loved it.) Her salad was huge (and good; all the produce at F St. is organic), so she took some home to leave room enough for the two of us to split a delicious warm brownie with caramel and vanilla ice cream.

Joseph concludes: "We don't usually have dessert. But the orange brulee tart with citrus [thin lemon and orange slices roasted in the oven] was the best dessert we've had since an Avocado Citrus Napoleon in a one-star Michelin in France. Get the name of the pastry chef – she's a keeper." Her name is Carrie O'Neil and Dan says he'll keep her.

The place is also open for lunches most weekdays with the same pizzas and salads, but sandwiches replacing the dinner entrées. I recommend Dan's specialty, "The Carolina," with tender pulled pork on a Brio ladybug bun, a tangy Carolina-style black pepper/mustard vinegar sauce on the side and the soon-to-be famous F St. cole slaw. (He served it at his wedding.)

One more word of warning: The café is not very big — only a couple of dozen seats — and its reputation has been growing by leaps and bounds through word-of-mouth. You'll definitely want to make advance reservations, especially for weekend dinners. Enjoy!

Push down on the potatoes with a small plate or potato masher until they crack open and are flattened, doubling in diameter.

Bake until golden and crisp, about 15 to 20 minutes.