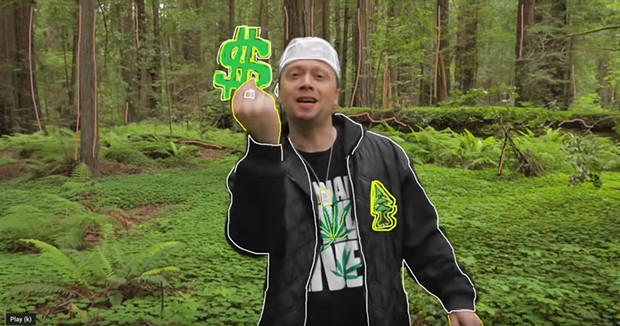 As the nation watched transfixed last week by news that federal prosecutors had charged at least 50 people in a brazen college admissions scandal in which rich parents allegedly paid millions to get their kids into universities like Yale and Stanford, young Malcolm Abbott strolled out of his family's posh Upper East Side apartment in Manhattan.

Abbott's parents, Gregory and Marcia, who own an international beverage distributing company and reportedly split their time between Manhattan and Aspen, Colorado, were indicted in the case after allegedly paying at least $125,000 for a sham nonprofit to doctor their daughter's SAT and ACT college entrance exam scores. But while most affiliated with the indictments were hiding out and laying low, the young Mr. Abbott took to the streets, where a bevy of reporters were hanging out, to defend his parents and — apparently — promote the rap album he'd released under the name "Billa."

Abbott told reporters that prosecutors were blowing the situation out of proportion, asserting, "I believe everyone has the right to go to college, man," before handing a reporter a copy of his album titled Cheese and Crackers, which the Chronicle notes, "appears to play on Billa's whiteness (the titular 'cracker') and wealth ('the cheese')."

"They're in their 60s but they're also ... removed from the real world," Abbott told reporters of his parents, according to the New York Post. "They don't fucking understand this shit."

What launched young Billa's rant from pedestrian to internet-conquering was the fact that it was entirely delivered while he smoked not just a blunt, but the ugliest, most sloppily rolled blunt this side of a junior high school. But much of the online ridicule that followed reporting on the spectacle missed an important point.

Abbott was smoking his weed brazenly and defiantly in broad daylight in a city in which some 17,500 are arrested on simple possession charges annually, with a New York Times analysis finding that a vastly disproportionate number of the arrestees were people of color. The city announced in June that it was ending arrests in most simple possession cases, which Mayor Bill de Blasio estimated would result in about 10,000 of those folks receiving criminal summonses, meaning they would still face criminal charges.

So Billa took to the streets — while engaging in an activity that people of color are still arrested and cited for daily in New York City — to lament the unfair treatment of his parents, who were just doing what they could to make sure their daughter was admitted to an elite school, where she would presumably take the place of a more qualified applicant.

Meanwhile, in Humboldt, a pair of white rappers apparently asked Abbot to hold their metaphorical blunts.

Local reporter Kym Kemp recently posted a music video to her website released by UnderRated and Garth Vader for their new song "Black Markets Matter," a track from an album of the same name due to be released on April 20.

Many here in Humboldt County might sympathize with some of the sentiments in the track, as cannabis legalization has simultaneously caused black market prices to plummet while regulation and fierce, deep-pocketed competition combine to squeeze those in the legal industry. But the song and album titles are unquestionably in terrible, privileged taste.

First, consider the play on words, appropriated directly from the Black Lives Matter movement designed to bring attention to systemic racism toward black people, generally, and more specifically to police killings of black suspects. According to a Washington Post database, 23 percent of suspects killed by police in 2018 were black, though they make up only 12 percent of the U.S. population. (Blacks also accounted for 38 percent of the unarmed suspects police fatally shot last year, according to the database.)

That should be enough right there to say that maybe Black Lives Matter isn't the slogan that should be co-opted by a couple of weed farmers looking to make a point about economic challenges.

But we can even delve a bit deeper and ask ourselves who has suffered most in the black market cannabis economy. A 2013 report by the ACLU found that blacks were almost four times more likely to be arrested for cannabis possession than their white counterparts, despite the fact that whites and blacks report using cannabis at similar rates. Perhaps more startlingly, the report found that in more than 96 percent of counties with populations of at least 30,000 in which at least 2 percent of residents are black, blacks were arrested at higher rates than their white counterparts.

Prohibition is a system that has disproportionately impacted communities of color and that's something white people especially should keep in mind when lamenting changing economic realities, defending their wealthy parents or promoting their rap albums. After all, optics matter, too, and it's a very bad look, kind of like Billa's crumpled, disfigured wet paper bag of a blunt.