They gathered to party uber-grower Eddy Lepp off to prison 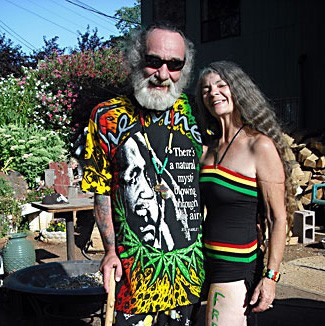 It seemed the whole NorCal pot activist community had gathered -- not to mention patients, musicians, families and community members. The group smoked, danced and sweated in the July Upper Lake heat to live reggae acts and some weed-loving Mendo hip hop as well. Donations for the Eddy Lepp cause were collected, and a rainbow of canna-friendly publications and products were to be found amongst the partygoers.

The Reverend himself appeared, after his long interview with the CNBC crew. He was dressed in baggy rasta-gear, supporting himself on a cane and the arms of well-wishers and fans. He seemed frail; one could expect that his spirit and body would be damaged from the stress he has put himself through.

But when the Lake County sheriffs came to bust up the party for being an unlawful gathering, Lepp laid the smack down and sent those cops home with their tails between their legs. The crowd chanted and cheered for him as he walked proudly back up to his home after dealing with the interference. The incident definitely gave a needed boost to the stoney Independence Day gathering.

So what was the deal? Well, if you follow the news in the cannabis community, then the Reverend Eddy Lepp has certainly come on your radar screen a number of times in recent years. Some might argue he's the renegade medical marijuana growing badass of our 215-time. He became a Rastafarian and a minister of the Universal Life Church to defend his right to grow on spiritual grounds. He founded the Ministry of Cannabis and Rastafari on his large Lake County property -- right along Highway 20 -- offering patients and caregivers the chance to have personal plots of weed on his land. Then he planted 20,000-plus pot plants right in front of everyone. Fields of weed, waving in the wind, growing the way weed should be grown: out in the open, out in the sunshine and with good intentions.

Well, you can't tempt the Man like that and expect him to leave you alone. This May he was sentenced to 10 years in federal prison.

But what's a grower to do? Residents are sick of all those growers out there secretly using homes in their ’hood to grow pot for whatever reason, judging by the community outrage every time one burns down. They're fed up with the covered windows, the homes populated by large, snarling pit bulls instead of people and the burglaries and violence associated with the many vacant, money- and weed-storing homes behind our Redwood Curtain.

Certainly the complaints are valid. The big money associated with big weed has led to community vice. But did you ever think, for a second, when you were shaking your fist at the dark, loudly humming house with the car-less driveway across the street, that people wanting to grow herb don't really have too many options in terms of where they can plant their crop?

Who do you know who's just growing bud right out in the open, with their middle finger raised up high toward the man? Probably a few people. But for every daring, in-your-face grower, there's a dozen who are trying to quietly work within the industry to whatever end.

Needless to say, Lepp got busted and tried, and received the minimum sentence under the law. His surrender date was July 6, 2009, so by the time this paper hits the streets, Lepp is sure to be behind bars. Being that Humboldt has a vested interest in all things weed the Journal seized the opportunity to attend Lepp's final hurrah as a free man: a "Freedom Party" held on a most fitting day, the Fourth of July. The shindig went down at Lepp's Lake County estate, the very place where so many bud plants were hacked down by the feds.

Sitting amongst joint-laden "Freedom Fighters" who bobbed their heads to the bass-heavy beats, one could easily recognize each attendee's desire to be a part of the fight for cannabis rights. One guest to the estate, a "traveler" named Josie conjured up the age-old argument of weed being a harmless substance to ingest. "Have you ever seen anyone on pot flip out and shoot anybody?" she asked. Regardless of being unfamiliar with the details of Lepp's case, she thought her support was necessary. It seems she's heard enough in her lifetime to oppose sending someone to prison for growing pot regardless of the quantity involved.

Lepp's loud mouth and daring tactics have won him some haters, and it is known that some folks have written him off as money-loving wanna-be cult leader who got what he asked for. You just wouldn't know it as the smiling, cheerful group passed around steamrollers and volcano bags. The partygoers just seemed happy to have a real life person to stand behind in this fight against the criminalization of marijuana.