In Deathly Hallows, Harry and his teen chums finally upstage the supporting cast 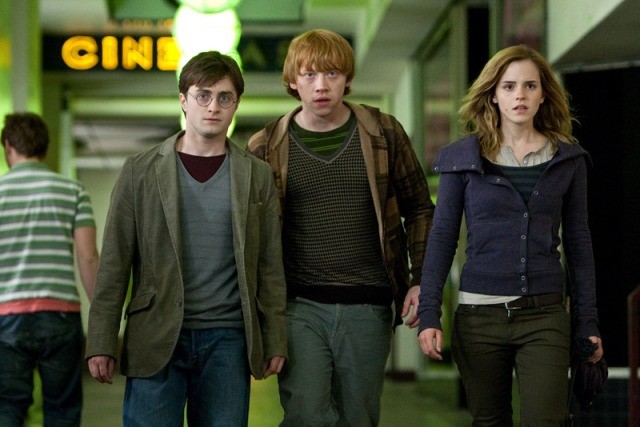 TANGLED. Disney checks the Rapunzel box off its "fairy tales to animate" list with its latest kid-seducing 3D computer-generated release. Rapunzel (voiced by Mandy Moore) kidnaps a charming bandit but agrees to release him if he'll help her escape her tower. Disneyesque adventure and intrigue ensues. Rated PG for brief, mild violence. 100m. At the Broadway, Fortuna (in 3D) and Mill Creek (in 2D).

LOVE AND OTHER DRUGS. Anne Hathaway and Jake Gyllenhaal recently posed nude on the cover of Entertainment Weekly to promote this film and we hear that that's actually fairly appropriate, considering how often the pair is sans clothes in the movie itself. Oh, there's a story in there somewhere -- she's a free spirit, he's an uptight company man. Commence romance. Rated R for nudity, language and drugs. 113m. At the Broadway, the Minor and Mill Creek.

BURLESQUE. Cher and Christina Aguilera star in this tale of a small-town girl who makes that all-too-familiar trip to Los Angeles to make it big. She lands a job as a cocktail waitress in a majestic but ailing theater and learns the ropes from the club's proprietor/star. Lots of singing, dancing and sparkly costumes. Rated PG-13 for sexually suggestive dance routines, partial nudity, and language. 119m. At the Broadway, Fortuna, the Minor and Mill Creek.

FASTER. After 10 years in prison, Dwayne "Don't Call Me The Rock" Johnson is looking to avenge his brother's bank robbery-related death by picking off those who done wronged him. One. By. One. Can a veteran cop (Billy Bob Thornton) stop him? In case it sounds too run-of-the-mill action film-y, we'll mention this one's actually getting good reviews. Rated R for violence, drug use and language. 98m. At the Broadway.

As usual, the ATL offers a few more tasty cinematic treats this week. Academy Awards Best Picture winner Chicago (2003) classes up the big screen with singing, dancing and all that jazz on Saturday. On Sunday, Frodo begins his (very) long journey to destroy the Ring of Power in the fires of Mount Doom in the first Lord of the Rings installment, The Fellowship of the Ring. Keep it secret. Keep it safe.

The first day in December sees the return of the ATL's Science Fiction Pint and Pizza Night, which features an invisibility theme. First, The Astral Factor (1976) tells the story of a boy who strangles his mother and is banished to a mental institution. While there, he comes across some books that teach him how to harness invisibility. Naturally, a murder spree ensues. Second, The Amazing Transparent Man (1960) chronicles to what lengths a mad man will go to produce an army of invisible soldiers. Don't let these films sneak by you.

HARRY POTTER AND THE DEATHLY HALLOWS PART 1. Unbidden, snatches of one of my favorite hymns came to mind while watching the next-to-final Harry Potter film: "In the bleak midwinter, frost wind made moan/Earth stood hard as iron, water like a stone." Unfortunately for Harry Potter, though, no savior makes an appearance here and Harry's situation seems grim indeed at the end of this first part of the film adaptation of J.K. Rowling's final novel in the Harry and friends saga (perhaps).

My first review in the Journal was of the first Potter film adaptation, Harry Potter and the Sorcerer's Stone, which opened Nov. 16, 2001. Publisher Judy Hodgson was looking for an adult who had not read the novel to review the film alongside a story about the reaction of a trio of 10-year-olds who'd read the entire Potter series (the presumed target audience). I'm not sure about the adult part of the requirements, but I got the nod thanks to the fact that Judy was on my e-mail list for brief, generally sarcastic film reviews.

While I mostly enjoyed the first Potter, I found it to be a bit cutesy in parts and I hated the seemingly endless Quidditch match. Since then, armed with a better knowledge of the stories and their conventions, I have increasingly enjoyed the Potter adaptations as the young wizards grew up and their world became darker.

Not surprisingly, the latest film is, in most respects, the darkest yet, and the winter setting is indeed appropriate. As everyone knows, the books relate Harry's struggle with coming to grips with his heritage and with the battle between Lord Voldemort (Ralph Fiennes in the films) and Harry, along with his allies from Hogwarts, the Order of the Phoenix. As the multi-book multi-movie story nears conclusion, the battle is not going well for Harry's side. Voldemort's allies have gained control of the Ministry of Magic and Harry is at the top of their seek-and-destroy list.

While Harry has come to grips with his destiny, he is now concerned with isolating his friends from the danger he faces, but he can't shake Hermione and Ron Weasley and, in any case, he needs them. The primary plot centers on the trio's attempt to locate and destroy the Horcruxes, bits of leftover soul from departed individuals that Voldemort is trying to use to become immortal, with a little Weasley jealousy on the side.

In many ways, though, Part 1 is simply a preparation for the final battle between Harry and Voldemort. The fine cast of the series is back (save for those whose characters have been killed off) including, of course, the three young principals, Daniel Radcliffe (as Harry), Emma Watson and Rupert Grint (Hermione and Ron). Not only have the actors matured; so has their acting ability and the film takes advantage of that by including a number of scenes of their personal interaction. As well, the film is clearly isolating the three in preparation for the final confrontation, where they will have to stand on their own without adult protection.

Director David Yates, who assumed the helm of this series with the Order of the Phoenix in 2007, gives viewers a solid film, and it is clear that Radcliffe, Watson and Grint are up to the task of taking over from the established actors who have populated the films to date. Rated PG-13 for some sequences of intense action violence, frightening images and brief sensuality. 146m. At the Broadway, Fortuna, the Minor and Mill Creek.

THE NEXT THREE DAYS. Based on the 2007 French film Pour Elle, The Next Three Days is a thriller with an interesting premise. Lara (Elizabeth Banks) and John Brennan (Russell Crowe) seem to be living a happy life together with their young son Mick (Michael Buie). He teaches literature at a community college, she works in an office and they juggle childcare. However, their life is overturned when Lara is arrested for, and subsequently convicted of, the murder of her boss, with whom she had an argument the night before.

Three years later, when Lara's appeal is denied, a devastated John, convinced of his wife's innocence, decides to find a solution outside the legal system -- namely, breaking Lara out of jail. Initially seeking advice from someone who wrote a book about breaking out of jails (Liam Neeson), John soon discovers that he can get all the advice he needs from the Internet.

The story that follows is reasonably tense as the task would seem to be beyond the reach of a literature professor and the planning, including buying new identities, is complicated. But this is a Russell Crowe film so, sadly, characters other than his are given short shrift. We see nothing of Lara's trial and only snatches of her time in prison during visits from John and Mick. Interesting single mother Nicole (a fine Olivia Wilde, who played "Thirteen" on House) is reduced to a plot device, and Mick's grandparents (Brian Dennehy and Helen Carey) are virtually undeveloped characters. Crowe is not bad, but he is always the same in these types of roles. As so often happens in Hollywood thrillers with a major actor, everything is subsumed to highlighting that performance. I wanted more. Rated PG-13 for violence, drug material, language, some sexuality and thematic elements. 122m. At the Broadway and Mill Creek.

DUE DATE. Good rule: If your wife is expecting, don't go on a cross country road trip with Zach Galifianakis. Rated R. 95m. At the Broadway and Mill Creek.

MEGAMIND. The world's most brilliant supervillian is also its least successful. More CGI for the kids. Rated PG. 96m. At the Broadway, Fortuna and Mill Creek.

MORNING GLORY. Rachel McAdams defines the word "effervescent" with her performance as a producer in this film about a last-place television morning show. Rated PG-13. 107m. At the Broadway and Mill Creek.

RED. Being privy to CIA secrets is all well and good when you're a part of the agency. But when you try and leave, watch yourself. Rated PG-13. 111m. At the Broadway.

UNSTOPPABLE. Tony Scott's latest stars Denzel Washington, who must stop a runaway train carrying combustible liquids and flammable gas before it, like, totally blows up a city. Rated PG-13. 98m. At the Broadway and Fortuna.