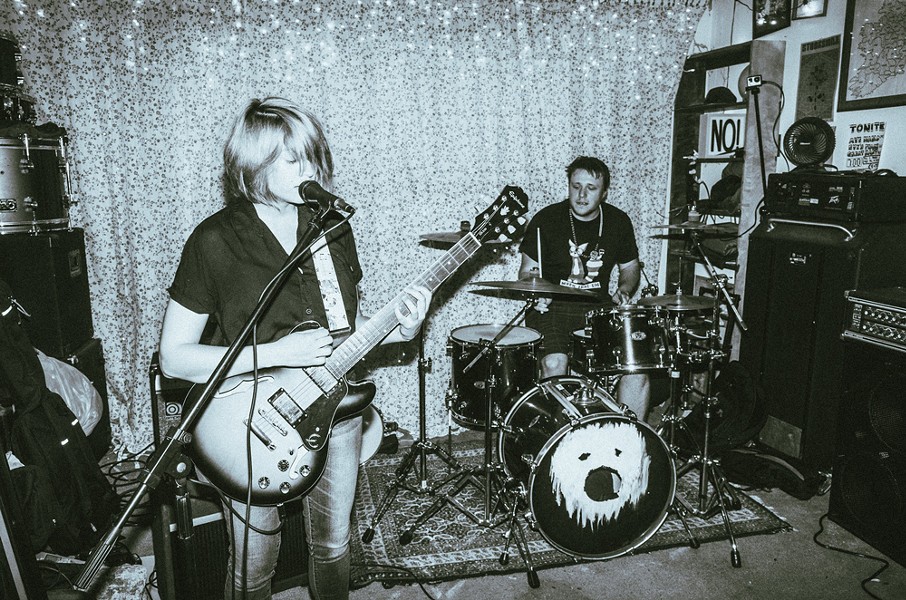 Last week, local heavy music aficionado, New York native and Natty Dog Hot Dogs cart wrangler Eric Riccio died. That he died of a heart attack at a local heavy metal show should not be a source of grief for his many friends, customers and casual acquaintances, but one of pride. Eric loved OG punk and metal music, and every conversation I ever had with him involved rhapsodic retellings of shows he had seen and bands he had watched go from nothing to huge. The man died doing exactly what he loved: hearing live heavy music. That's a happy death as far as I'm concerned and, judging from the interactions we had, I suspect he'd agree. Years ago in another life, I was lucky enough to share the stage with guitarist Mike Scaccia, famous for playing with Ministry and Revolting Cocks on their best records, and who met a similar fate onstage seven years ago while playing with his first and perhaps best big band, the Texas thrash titans Rigor Mortis. People live and die playing music, and people live and die listening to that music. And the human world would be a gray mistake if that relationship ever faltered because the sonic universe is a glorious argument for the righteousness of our species, and an ever expanding frontier where we can all live and die free.

Have a wild week.

It's the last Friday the 13th of this year and decade, and the next one won't be along until March of 2020. It's also the night after the full moon, which in December is creatively called the "Cold Moon." So it's probably best to take things slowly tonight and not press your luck out there in the fields and on the black-top. Here's a safe little bit of fun: The Eureka Chamber Music Series presents the Arianna String Quartet with pianist Tian Ying performing an evening of Mozart and Brahms at the Calvary Lutheran Church at 7:30 p.m. ($30, $20 seniors, $10 students). If listening to chamber music still manages to angry up the blood and grow wild hairs, I can't help you: You're a gosh dang werewolf.

Country Western and Folk act The Handshakers — whom I have called one of the best bar bands in the area and whose delightful album I reviewed some months ago — are sadly calling it quits. But not before saying goodbye in good fashion at the Basement tonight at a no cover swan song show starting at 8 p.m. Singer/songwriter and collaborator Georgia Ruth will be on tap to lend some talent to the already over-running cup. If you like good country and barroom blues, you are a fool to miss this final second line of a very fine band.

The All Seasons Orchestra is presenting its "that time of year" thing with a Winter Rhapsody Holiday Concert at The D Street Community Center. Having gone to these seasonal shindigs in years past, I will tell you this is a fun place to hear thematically uncomplicated orchestral music in the very definition of a neighborhood space. Free to all comers, this delightful set will kick off dusk around dusk, which I am going to call 5 p.m.

New York City hatches a lot of creative critters and we are lucky to snare a few here and there for an evening or two to share an artistic symbiosis of starving artist/hungry crowd until, detaching, our guest flits off, leaving both parties, miraculously, in satiety. Anyway, WSABI FOX is one such cool creature, a prog/punk/performance art spectacle guided by Filipino artist Jennae Santos. I like the whole thing, it reminds me of the bygone days of VHS, Asian noise bands and the cold piquance of pre-grunge Steve Albini productions. The place is Siren's Song at 7 p.m., and the local support is all unimpeachable: Blackplate, Tessoulation and Sad Krotch ($8).

The Outer Space had to close its doors this week and until the new spot is ready, some shows booked at the now-erstwhile venue will be held out in the greater community. One such escape vessel blasting off of the mothership has landed in the friendly atmosphere of the Siren's Song tonight at 7 p.m. Bernie & The Wolf is a Chicago-based slowcore and math rock duo who would sound equally at home opening for Florence and the Machine or the defunct '90s band Hum. In on the scheme are Blood Hunny and Sundazed, so if you like the glorious aesthetic of quarter-century-old B-sides from the alt-rock world, this is the show for you ($5-$20 sliding scale).

WHOMP and World Famous Productions are joining forces to put on a big blowout in the form of ZEE, a collaborative jam by visual artist Zebbler and music producer Encanti. It's a big drum and bass electro doo-dah, likely with many massive digitally enhanced peaks. It should be big enough to fill the Arcata Theatre Lounge at 7:30 p.m., anyway. Also on tap for this breaker-melting party are electronic artists Supertask, Pagan and A Hundred Drums. If you like this sort of thing, I need hardly say more. If you are curious and uninitiated, presale tickets are $15 and it's $20 at the door.

Collin Yeo would like to remind his loved ones that, with shipping and quarantine times factored in, this week is probably the deadline to purchase him a giant, volatile and joust-ready war bird. He prefers he/him and lives in Arcata, or as it might be called in a month: The Mecha-Ostrich Forbidden Zone.