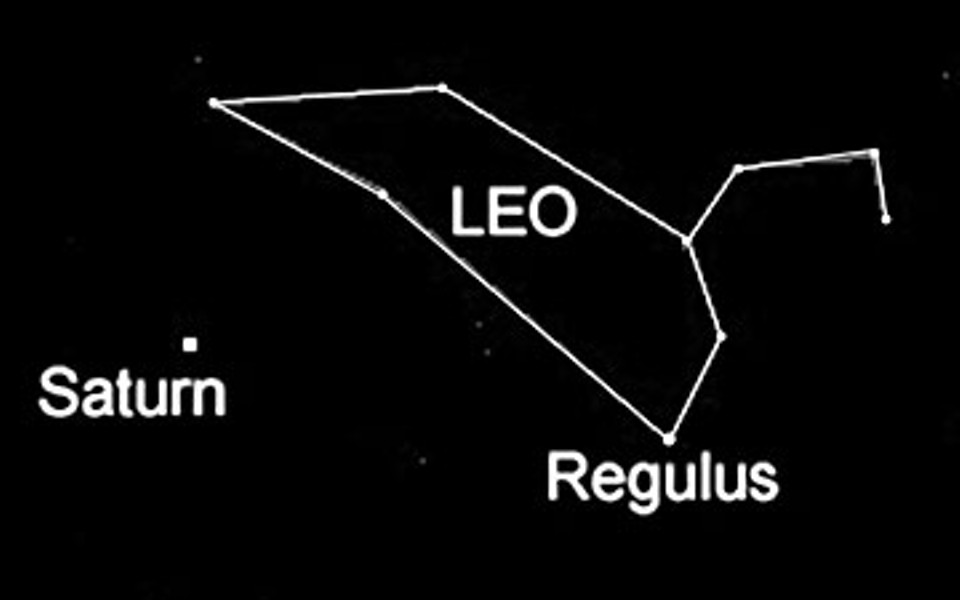 Simplified sky chart for late January at Humboldt's latitude, looking southwest. Saturn lies about halfway up the sky, below the constellation Leo (the Lion). Leo's brightest star Regulus is one of the brightest in the sky.

Trying to stargaze from downtown Eureka is a bit like someone suffering from agoraphobia setting up camp in the middle of Times Square: not the smartest move. Still, the optimists in our ranks can try to spot a few glimmers in the night sky, especially the most prominent ones. My shortlist would definitely include the bright planets Venus, Jupiter and Saturn.

Saturn's an easy target now, unless the pre-dawn sky is completely socked in by clouds. At 5 a.m. in January, a Humboldt county resident would see the planet about halfway between the southwest horizon and the zenith (directly overhead). Saturn is unmistakably bright and colored ochre (to make the point, there's an official pigment color, "Saturn Yellow"). Of course, if you have a telescope, even a very modest one, you'll be able to make out Saturn's bright rings. Binoculars won't quite do it, unfortunately.

However, at 5 a.m. this New Year's morning, when I walked out onto the balcony, Saturn was nearly overhead! Instead of shining from 45 degrees up in the sky, it was all of 65 degrees up from the horizon. How can that be? Well, the planet sure didn't move -- it's been cruising around in the same orbit for a few billion years, and it's unlikely (make that, impossible) to suddenly switch tracks. Meaning, it must have been me that moved.

Let's look at this more closely: Eureka's latitude is about 41 degrees, meaning it's located on a circle of latitude that makes an angle of 41 degrees with the equatorial plane. (So the latitude of the North Pole is 90 degrees.) If I'm seeing an object in the night sky 65-45 = 20 degrees higher than it appears in Humboldt, I must be 20 degrees of latitude closer to the equator, that is, 41-20 = 21. Bingo! My present latitude is 21 degrees.

If I tell you that I didn't cross any oceans to get from Eureka to where I am now, you could easily deduce that I'm in Mexico. And if I gave you the added information that I'm equidistant from the Atlantic and Pacific, you could look at a map of Mexico, check what towns lie right in the middle at a latitude of 21 degrees, and guess that I'm in Guanajuato, right in the geographical center of the country.

And you'd be right. ¡Felicitaciones!