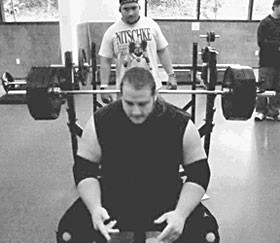 When Chad Helmonds entered Humboldt State University five years ago, he weighed 315 pounds -- a football player, 6'2'', a big guy by any standard. He had lifted weights in high school as a part of his football training, so he took some notice of the weightlifting records on the wall the first time he walked into the HSU gym. The bench press record was 505 pounds -- something that seemed unthinkable to the young freshman.

But when he went out for football at Humboldt, strength and conditioning coach Drew Petersen noticed Helmond's knack for lifting, and when a shoulder injury stopped him from pursuing football, he began devoting more and more time to lifting.

"That was when I guess my body started maturing more," Helmonds said. "From there, I kept on lifting and kept surpassing everyone ... out of nowhere, it just took off like a bat out of hell."

Helmonds became a rising star in his weight class, which by this time was 325-plus; at the time of his graduation last month, Helmonds was up to 350. "I'm not saying that's all muscle," he modestly points out.

That untouchable bench press record began to seem closer as Helmonds set HSU weight class records in the clean -- think the Olympic clean-and-jerk, without the jerk -- at 405 pounds, and squat, at 670. Helmonds woke up the morning of Monday, May 9, knowing that if he wanted a shot at the record, he'd have to do it while he was still enrolled in classes, which was just a few more days. During a recent previous attempt, he'd barely done one rep at 475 pounds. In order to set the record, he'd have to do more reps.

See, you don't actually have to lift, say, 500 pounds, to prove that you're strong enough to lift 500 pounds. Here's how it works: You (well, probably not you, dear reader) load the bar with the amount of weight you think you're capable of lifting. Then you do as many reps as you can, and your "maximum lift" is calculated by a complicated formula, which is something like number of pounds lifted, divided by 1.0728 minus .0278x, where x is the number of reps. But math isn't really the point here -- brute strength is.

Helmonds called the 475 a "semi max" for him, so only lifting it once was disappointing, a mental barrier. He tried to clear his head in order to try another lift that Monday.

Helmonds spent the morning mentally preparing, going over the lift again and again in his mind. By the time he arrived at the gym, a small crowd had gathered. Would this be the day, or would Helmonds again be unable to lift more than one rep? He decided to go with a slightly lower weight this time -- a mere 465 pounds -- and took his position on the bench.

He lifted the bar once.

Then a second time.

And a third, and a fourth.

Someone consulted a chart. Helmonds had proven he could bench press 510 pounds -- more than anyone else had at Humboldt State in its 93-year history.