By Jackie Botts and CalMatters

Photo by David Rodriguez, The Salinas Californian Jose Suarez, a strawberry farmworker, wears a medical face mask as he stands near rows of strawberry fields in Watsonville, California, on Wednesday, July 29, 2020.

Paz Aguilar continued working seven days a week at two fast food restaurants and as a janitor, even as Oakland seemed to be grinding to a halt around her.

Then in late June, her life did, too.

By then two of her coworkers at a combo Taco Bell and Kentucky Fried Chicken joint stopped showing up to work — Aguilar said a manager told her they were on vacation — after one woman stayed home with a fever. Aguilar, 54, had spent hours rolling burritos within arm's length of her.

First Aguilar felt weak, dizzy and tired. Then, a severe cough and fever. A total of at least seven employees would fall ill with the virus, by her count. So would Aguilar's sister-in-law.

Three weeks into her illness, Aguilar had a stroke, which she attributes to the virus' toll on her body. When she left the hospital a month later, one side of her body and face was paralyzed. She struggles to walk and talk. Her doctors say it may be a year before she fully recovers. 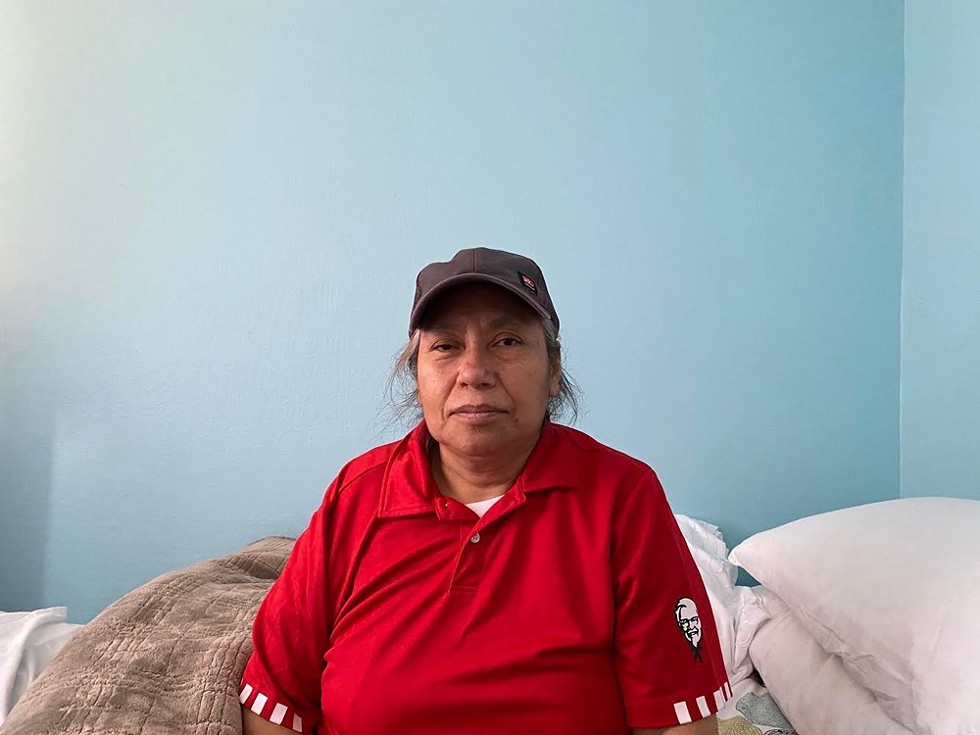 On Sept. 4, Aguilar filed a complaint with Cal/OSHA, the California Occupational Safety and Health Agency and the Alameda County Public Health Department. She alleged that her managers had failed to enforce mask-wearing or social distancing, and had hidden COVID-19 diagnoses from her and others. Kentucky Fried Chicken and Taco Bell did not respond to requests for comment.

Aguilar said she filed the complaint so her coworkers wouldn't have to go through what she has. "El riesgo sigue todo el tiempo," she said — the risk continues.

Aguilar said the county health department never followed up. Cal/OSHA's response: a letter asking that the manager explain how the issues had been fixed.

"The Division has not determined whether the hazard(s), as alleged, exist(s) at your workplace and, at this time, the Division does not intend to conduct an inspection of your workplace," the letter reads.

Cal/OSHA has sent a version of this letter to employers accused of not keeping workers safe from COVID-19 more than 5,800 times since February.

Letters instead of inspections

During the pandemic, Cal/OSHA has defaulted to responding to the vast majority of worker complaints about coronavirus hazards with letters rather than on-site inspections, even as workplace outbreaks have fueled spread of the virus across the state.

Of the 6,937 COVID-related complaints the agency had received between Feb. 1 and Sept. 27, Cal/OSHA has conducted on on-site inspection for just 352 of them — or 5 percent, according to a CalMatters analysis of Cal/OSHA data.

It's a steep drop from the typical annual inspection rate, which Cal/OSHA pegged at 25 percent over the past four years. For non-coronavirus complaints filed during the pandemic, the rate is 12 percent, revealing how the agency has specifically limited its enforcement of workplace hazards related to the virus.

The strategy follows a March directive from Gov. Gavin Newsom to focus on compliance assistance instead of enforcement. It has characterized the chronically understaffed agency's answer to a deluge of COVID-related complaints.

But the low inspection rate raises questions about how many COVID hazards the agency may have allowed to persist, and how many negligent employers may have been given a free pass, despite endangering their employees' lives.

"There appears to be a very direct connection between workplace enforcement and being able to stop the spread in our communities," said Sen. María Elena Durazo, a Los Angeles Democrat, at a Wednesday legislative hearing on worker safety during the pandemic.

Research from the Harvard School of Public Health backs up Durazo's observation. Waves of COVID-19 deaths have followed waves of complaints about workplace safety across the country, according to a preprint published Wednesday. In Western states, complaints were correlated with deaths 24 days later.

"Worker concerns may be an indicator of real risks, and failure to respond is a missed opportunity to intervene to mitigate disease transmission in the workplace and, in turn, the community at large," the authors wrote.

The Californians enmeshed in workplace outbreaks — from meatpacking plant workers to farmworkers brought from other countries — tend to be low-wage and Latinx. Many are immigrants.

To the heads of Cal/OSHA and its parent agency, the Department of Industrial Relations, Durazo asked: "This is a double, triple crisis in the Latino community. So any thoughts about what you're going to do to really up the ante here?"

Cal/OSHA Chief Doug Parker responded that Cal/OSHA has "tried to focus our efforts on industries where there are low wage and immigrant workers," like agriculture.

"We thought that the use of these letter inspections, while not as effective as an in-person inspection, was going to allow us to triage and then reach the most numbers of workers that we possibly could," Parker said. "We believe our approach is the right one and has made a significant impact."

“We believe our approach is the right one and has made a significant impact.”- CAL/OSHA CHIEF DOUG PARKER tweet this

The choice to triage

During normal times, Cal/OSHA has two ways to follow up on workplace complaints.

Anonymous complaints, unless very serious, generally trigger a letter investigation. Cal/OSHA sends an inquiry to the employer. Depending on how serious the complaint, the employer has between three and 14 days to either demonstrate the hazardous conditions were corrected or do not exist. Employers must post the inquiry letter and their response in a public place at work. If Cal/OSHA is unsatisfied with the response, it might inspect in person. Otherwise, the case is closed.

Complaints that either allege a severe hazard or were submitted by a named worker typically launch an inspection: a conference with the employer, a request for documents, a physical inspection, interviews of managers and employees, and potentially a citation.

Agency staff should "have primary focus on providing technical assistance and support to have maximum effect to address the risk of COVID-19" and "focus enforcement activities where there are allegations of the most serious violations impacting health and safety," the order read.

Parker said Cal/OSHA has adopted a policy of responding to all COVID complaints, "except in the most serious cases," with letter investigations and an offer to provide technical assistance — adding "shockingly few take that option."

Newsom's order was understandable, said former Cal/OSHA chief Juliann Sum, given that compliance assistance means "you can touch more employers." But there are consequences, too: "Some employers could be less conscientious knowing they won't get inspected, and workers might feel discouraged and frustrated."

Labor advocates say on-site inspections are likelier to create meaningful change. Without an inspection, Cal/OSHA can't cite an employer for a health and safety violation.

"That's the crime of what's going on now," said Eric Frumin, safety and health director for Change to Win, a national labor coalition.

Parker said that in the agricultural industry, the agency has conducted more targeted inspections than it has received complaints, a sign of the level of fear among farmworkers who worry they'll lose their jobs if they complain about unsafe conditions.

The agency has also focused on aggressive outreach and education to employers and workers about Cal/OSHA's unenforceable industry-specific guidance on COVID safety in the workplace, Parker said. He pointed out that California has a higher inspection rate than that of the federal government.

Cal/OSHA has long been short staffed, a problem only exacerbated during the pandemic. In June, about 21 percent of Cal/OSHA's field inspector positions were vacant.

Industrial Relations director Katie Hagan told senators on Wednesday that the department has tried to bridge the gap by luring back retired safety engineers, borrowing staff from other agencies and aiming to hire 65 more inspectors by year's end.

The agency has been drowning in COVID work, said one Cal/OSHA employee whom CalMatters agreed not to name because of retaliation fears. Many inspectors are "scared like other people are of being exposed at work," the employee said, recounting that over the summer only 50 to 60 of nearly 200 inspectors volunteered to do field inspections.

In September, the agency announced its first citations of two dozen employers who failed to protect workers at the beginning of the pandemic. That's nearly as many employers as federal OSHA has cited nationwide.

The dinged employers span meatpacking, agriculture, retail, health care and senior nursing facilities, and include household names like grocer Ralphs, as well as lesser-known employers like Overhill Farms, which was fined about $200,000.

In the Cal/OSHA region that spans Orange County, San Diego and the Imperial Valley, at least eight enforcement staff have left since the pandemic's onset, according to an analysis of staffing charts. That leaves a third of positions vacant — including the regional manager and three of four district managers.

Trucks weren't getting cleaned between uses, employees weren't notified when their coworkers fell ill with the virus, and those who brought up concerns were told "if they didn't want to work there, they could leave," Berliner said. CalMatters agreed not to name the company due to retaliation fears.

According to federal records of the complaint, a Cal/OSHA officer noted that the workers reported a "failure of employer to update the Injury and Illness Prevention Program to integrate Cal/Osha guidance regarding COVID-19." Additionally, the workers alleged dangerous work conditions related to truck safety and exposure to silica, a known carcinogen.

Berliner says that the complaint included pictures and text messages, because the workers thought the more evidence they provided, they more likely they'd be to get an on-site inspection and real change.

Instead, records show Cal/OSHA did a letter investigation and then closed the complaint.

It's "pretty disappointing," Berliner said. Letter investigations are "just not sufficient in pushing employers to do the right thing because it doesn't result in a real citation."

This article is part of The California Divide, a collaboration among newsrooms examining income inequity and economic survival in California.