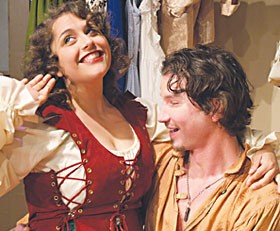 Arnold Saint Subber -- his name even sounds like a musical comedy character -- wasn't the first to notice that backstage goings-on sometimes mirror the scenes onstage, and even exceed them in dramatic pretense and flamboyant comedy. Nor would he be the last. But while serving as stage manager for a production of Shakespeare's The Taming of the Shrew, Subber observed one of the more celebrated couples in 20th century Broadway theatre -- Alfred Lunt and Lynn Fontaine -- acting out as well as acting, and the idea for his first show as a producer was born.

It became Kiss Me, Kate , with music and lyrics by Cole Porter. Porter had begun writing witty hits in the 1920s, became a Broadway legend in the 1930s with hit shows starring the likes of Fred Astaire, Jimmy Durante and Ethel Merman, but his popularity faded in the '40s. Badly injured in a riding accident and in pain for the rest of his life, Porter agreed to try once more with this Broadway show, principally because he had to abandon California and live in New York for a while to avoid IRS penalties. In 1948, Kiss Me, Kate became his longest running success, and its music is often considered his best.

The story mixes a couple of star-crossed romances among actors in a low-rent production of The Taming of the Shrew , with some Shakespeare (more or less) as part of the action. But at heart it's more of a show business story, as reflected in several of its songs (the famous "Another Opening, Another Show," and "Too Darn Hot" as well as the characteristically catchy "We Open in Venice"). There are also a couple of lovable gangsters to add danger to what passes for a plot. It's easy to guess that this story influenced movies like Shakespeare in Love and My Favorite Year , as well as the theatrical farce, Noises Off.

In 1953, Kiss Me, Kate became the first and probably the only musical movie to be released in 3-D. It was also done several times for television (my soundtrack album is from the 1968 Armstrong Circle Theatre series, starring Robert Goulet and Carol Lawrence --with choral arrangements by Ray Charles). These days, its politically incorrect aspects make it a harder sell, and today's theatre is less familiar with this kind of music, and this kind of musical. But North Coast Rep is meeting the challenge with a production that updates some stage elements while remaining true to its essential style and spirit.

Backed by a live band, the big production numbers (choreographed by Rebecca Rubenstein) are energetic and enthusiastic, but this style of musical provides special opportunities for solos and duets, and that's where the really transcendent moments occur. In the female lead as Lilli (and Kate, in the Shakespeare play within the play), Minderella Willens brings her formidable voice, on display in many colors, particularly in the growling, booming, comic tour de force, "I Hate Men." Darcy Daughtry plays the second female lead (Lois Lane/Bianca) and brings down the house with her sexy, superpowered second act solo, "Always True to You in My Fashion." Daughtry, like Willens, has a superb and thrilling voice.

But while the verbal wit runs out about halfway through "Always True..." it only accelerates in "Brush Up Your Shakespeare," done to perfection by the dynamic duo of Phil Zastrow and Rigel Schmitt as the theatre-loving gangsters turned song-and-dance men. Their performance was the moment I felt truly transported to Broadway in its Cole Porter prime. I believe I even detected a brief Jimmy Durante homage. These three numbers alone are worth the price of admission.

Anthony Mankins brings leading man looks and presence to Fred/Petruchio, and Jordan Matteoli is a pleasing second lead as Bill/Lucentio. Gene Cole as General Howell adds a needed jolt of comic focus towards the end of an increasingly halfhearted plot. While the ensemble singing and dancing styles mostly suggest a vaudevillish variety, there's a bit more of a Bob Fosse approach that begins "Too Darn Hot" opening the second act, a sizzling set piece featuring local favorite, Pryncz Lotoj.

With direction by Xande Zublin-Meyer (Dianne Zuleger is musical director), the cast finds every double entendre in both Cole Porter and Shakespeare -- including one that Porter may not have intended. I detected a few post-1948 references in the jokes, but on opening night the audience still got the one about Truman and Dewey. Scenic designer Calder Johnson suggests the seedy theatrical milieu while allowing plenty of always scarce stage space for the singing and dancing. Not all aspects of opening night went smoothly, but there was plenty of energy and invention that promises a glittering run.

Given the dearth of local coverage, let me again mention that To Kill A Mockingbird is currently onstage at Ferndale Rep. With convincing characters and clear narrative, this production brings this classic story alive, and provides local audiences with an engaging theatrical experience. There's a lot of background and photos on the novel, film and play at stagematters.blogspot.com, along with further notes on Kiss Me, Kate.