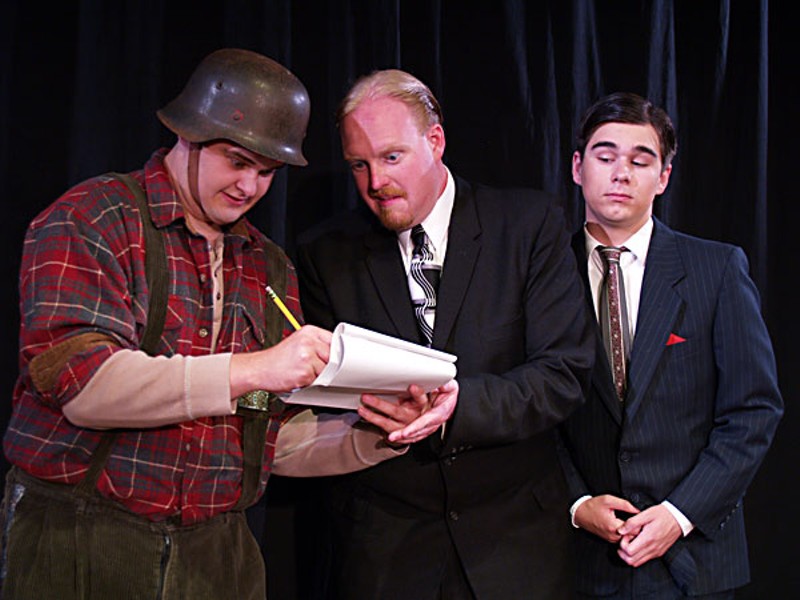 As a teenager, Mel Brooks' summer job at a resort hotel was insulting guests, parodying popular singers and improvising outrageous acts as a kind of court jester called a tummler. Entertainment was a major attraction for the mostly Jewish patrons of mountain resorts in New York and Massachusetts. The stage shows were directly in the vaudeville tradition, cross-fertilized with burlesque, variety theatre and early Broadway musicals.

Vaudeville trained the first stars of radio and television, and provided an early staple: the comedy and variety program. Before his famous films, Mel Brooks wrote for one of the best of these: Sid Caesar's Your Show of Shows.

Vaudevillians were versatile: Comedians like Bob Hope sang and danced; singers and dancers like Donald O'Connor did comedy. But after adapting for a final burst of glory in ’70s TV (The Carol Burnett Show, Laugh-In and even The Electric Company) the vaudeville tradition faded. It is alive again in Mel Brooks' musical, The Producers, now on stage at the North Coast Repertory Theatre in Eureka.

It's all there: the structure of jokes, and of running jokes (sometimes just a word, like "Elizabeth"), and of ethnic humor that Brooks broadened to religious and sexual preference identities. The play's first act in particular is an extended vaudeville sketch, satirizing institutions (the Broadway theatre and its producers, and "unhappy" accountants) with contrasting connivers and their sexy blonde assistant. Brooks finds new ways to be outrageous and vulgar, with bizarre comic invention but without meanness. This, and the 1940s-flavored music (also by Brooks), is why The Producers is so different from most new musicals.

The NCRT ensemble performs that first act with hilarious effect. David Powell as the boisterous producer Max Bialystock and Ethan Vaughan as the meek yet larcenous accountant Leo Bloom confidently deliver character and comedy, along with excellent singing. Bloom realizes that by raising much more money than the show costs (which Bialystock does by wooing lots of little old ladies), the producers can make a fortune if they don't have to pay these investors any profits because the show flops. Rigel Schmitt as the baby-faced Nazi playwright of the "worst play ever written," which guarantees failure, is so right that the opening night audience laughed as soon as he appeared. His backup-singing pigeons were a bonus. The act ends with a show-stopping, walker-stomping production number that's just amazing. Kudos to choreographer Anthony J. Hughes.

The second act is more conventional musical than comedy, perhaps because its centerpiece is the premiere of the flop -- which of course is a hit -- Springtime for Hitler. If you've seen either of the movies or the touring show CenterArts brought to the Van Duzer, you know how much this scene depends for its comic frenzy on the big Broadway trimmings. This production does its best, and though it's funny it doesn't quite rise to that first act finale. Still, John Ludington is memorably zany as director-turned-star Roger De Bris playing Hitler as a cross between a gay Al Jolson, David Bowie and a schnauzer.

Excellent costumes (by Marcia Hudson), ingenious staging, glittering dancing girls and a versatile ensemble (especially Adina Lawson and Danielle Cicon), fine performances by Keilli Marble as the Swedish bombshell Ulla and Gabriel Holman as De Bris' swishy assistant, and a backstage band all combine to make this a delightful evening. Tom Phillips directed, with musical direction by Dianne Zuleger. Enjoy the controversial wit of Mel Brooks (this 2001 play is only now premiering in Germany) and the solid echoes of vaudeville.

In its own way, Cervantes' The Ingenious Gentleman Don Quixote de la Mancha is also parody, of knight-errants and the chivalric romances. But like Brooks and Broadway, it also supports what it parodies. The first and second year students of Northcoast Preparatory and Performing Arts Academy began their stage version presented in Gist Hall last weekend by reciting the virtues of chivalry.

This generative classic of fiction by an aging unsuccessful playwright was adapted for this production by its director, Gretha Omey, who acted and was an artistic director in Spain. In addition to theatre, she teaches Spanish at Northcoast Prep, and students performed partly in that language (plus a little French and Italian). It was an intriguing adaptation and a sparkling production, with stage-filling ensemble dances, mood-setting music, brilliant costumes, a giant puppet and a steed for Quixote that looked like it had momentarily escaped from the Kinetic Sculpture Race.

Silas McIlraith as Don Quijote (the production's preferred spelling) heroically kept the play moving through moods of drama, comedy, pathos and action, with the delightful assistance of Gina Montagna as Sancho Panza. Sandra Gbeintor, Larkin O'Shea and Kirra Moon were particularly impressive, but the whole huge cast performed well. Add the remarkable musicians and other participants too numerous to mention, and this talented cohort bears watching.

Coming Up: Ferndale Rep opens the classic comedy Arsenic and Old Lace Thursday, May 28, at 8 p.m. Members of the Dell'Arte School Class of 2009 present their "Finals" in the form of six short plays, Thursday through Saturday at 8 in the Carlo.