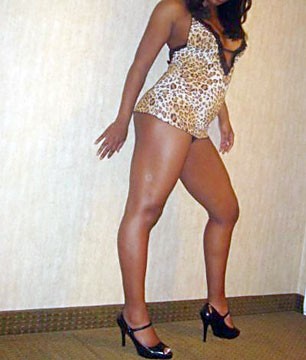 When Eureka police arrested two prostitutes earlier this month, it didn't require much undercover work. "We just called the cell phone number, set up a meeting location and showed up," Lt. Murl Harpham recalled, adding that the EPD has done this before. "We have a conversation [with the prostitutes] about what they're gonna do. It has to be a sex act, and there has to be furtherance, which basically means they show up. And at that point it satisfies [the criteria for] a crime."

And where do they get prostitutes' cell numbers?

Most people who visit the free classifieds site use it to job hunt, find roommates or sell stuff like concert tickets, pickup trucks and yard work. But in recent years it has become the forum of choice for lonely Web-surfers looking to hook up. (And I don't mean dating, though that happens through Craigslist, too.) Sex is for sale on one of the Net's most popular sites. And while it's not especially surprising that ladies of the night would trade cold street corners and Daisy Dukes for cell phones and the World Wide Web, it is rather remarkable to find their services offered so openly in the same venue used to hawk outboard motors, baby strollers and livestock.

A wave of public indignation has prompted Craigslist CEO Jim Buckmaster to take action. According to a message posted on the site, the erotic services section itself was created to placate users who were upset at finding ads for sensual massage, adult web cams, nude housecleaning and the like mixed into the regular personals and services categories. But confining the ads to their own section hasn't stopped the complaints, nor have Buckmaster's protestations that the incidence of crime on Craigslist is actually exceedingly low and that newspapers, alternative weeklies and the yellow pages have featured escort and sensual massage ads for decades.

It would seem easy pickings for law enforcement. Harpham said the only reason enforcement stings aren't more common is lack of manpower. Officer training, violent crime and drug busts take priority. "We get complaints about prostitution advertising," Harpham said. "People ask, 'Why aren't you doing something about it?' Every once in a while we do." This month's sting was only the second of its kind this year, he said.

Eureka has a noted red-light history, and Harpham seems to get a kick out of reliving it. "This has always been known as a hot town for getting Johns," he said. "Back in the ’50s and ’60s when I was working vice, prostitutes were working with pimps, and they would do a circuit -- Portland, Seattle, Vancouver, L.A. -- and [Eureka] was always their favorite stopover." Harpham explained that seasonal industries like timber and fishing made for lots of lonely men with time on their hands and money in their pockets.

The lieutenant maintains a website featuring stories he's accumulated over his six decades with the EPD, and his favorites seem to be the "red light specials." "Nothing was better than working Second Street on a warm Saturday night," reads one yarn. Up into the early 1950s, Eureka had as many as half a dozen brothels in Old Town. Harpham waxed nostalgic about the good ol' days. "In the ’50s there were some nice looking women," he said. "Now they're all on drugs. They don't take care of themselves. They're ..." he paused, "ugly, actually."

The Web may once again be changing the demographics of sex workers as well as their public image. A recent article in Slate suggested that, "The Internet has made it possible for prostitutes to fly solo and not get burned." San Francisco's failed Prop. K, which would have essentially legalized prostitution in the city by barring police from investigating and prosecuting it, kindled fierce debate, with advocates saying that prostitution has unfairly been linked to drug addiction and child sexual assault and that what goes on between consenting adults is no one else's business. Opponents, meanwhile, said the law would give pimps and human traffickers a free pass and would lead to more violence and other crimes. The measure lost by a whopping 16 points.

Curious what a Humboldt County, uh, masseuse might sound like -- and just how obvious her pitch might be, the Journal called up a woman whose ad identified her as "Alyssa," a 23-year-old offering "a verity [sic] of massages" to "gentlemen only!!!!!" She answered the phone with a casual, sleepy-sounding, "Hello?" At the mention of the Craigslist ad her tone changed, not to the breathy phone-sex purr you might expect -- more like the autopilot tone many of us employ while at work. "Are you looking for an appointment?" she asked. Her ad said she was "fully licensed." In what? "Massage therapy," she said proudly. "I'm from here, but I got my license in Nevada. I think a lot of these girls should do that. It's more professional."

When asked exactly what she was offering, "Alyssa" barely skipped a beat before demanding, "OK, first off, are you law enforcement?" Many criminals believe that cops have to answer this question honestly. "They always ask that," Harpham said with a chuckle. "There's no law against lying." After telling her (honestly) that, no, I was not law enforcement, "Alyssa" remained coy, saying that she offers "full-service body massage, a half-hour to an hour," with rates starting at $100.

Being turned down didn't phase her a bit. "OK," she said. "Bye." Her posting was removed the next day, having apparently been flagged. But a few days later she posted a new one (amidst several others) featuring a shockingly hard-core photo under a banner that read, "All Access With Class."